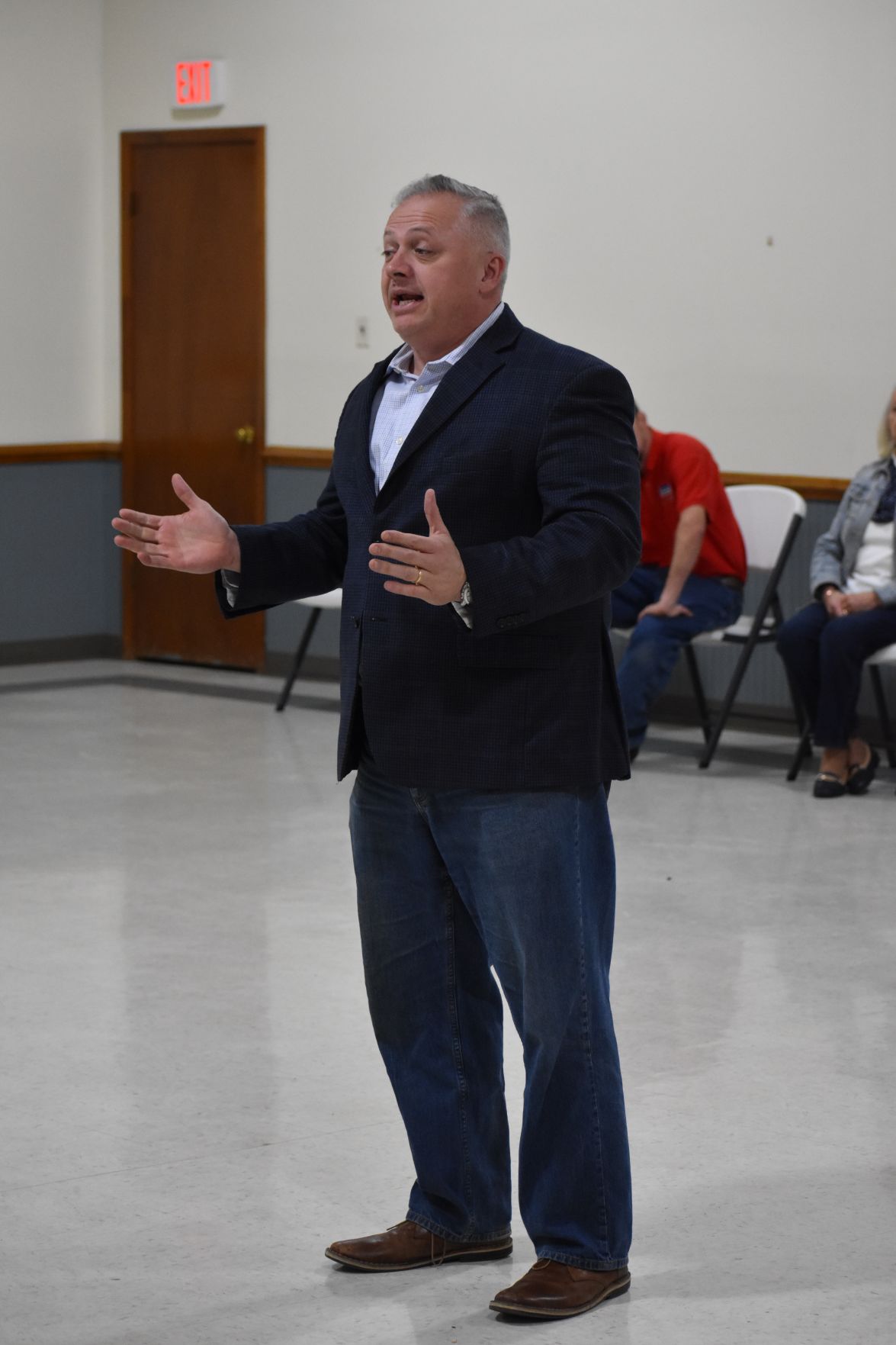 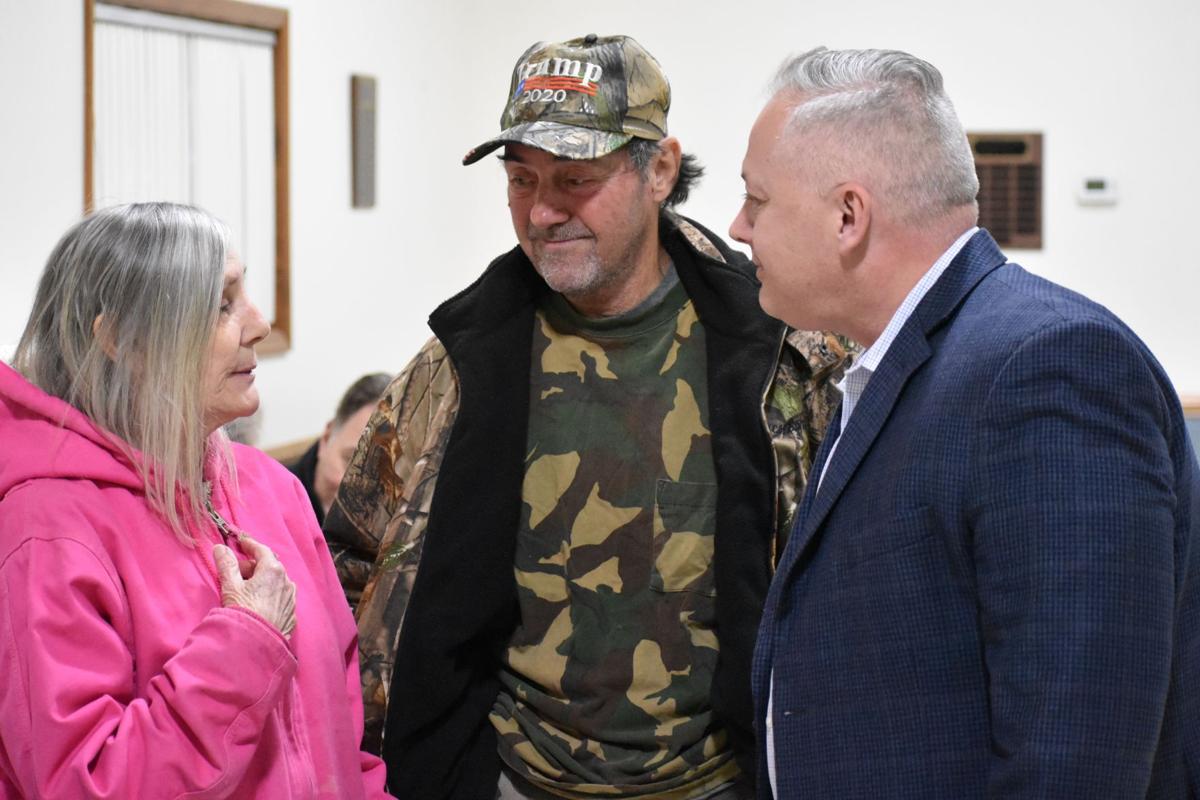 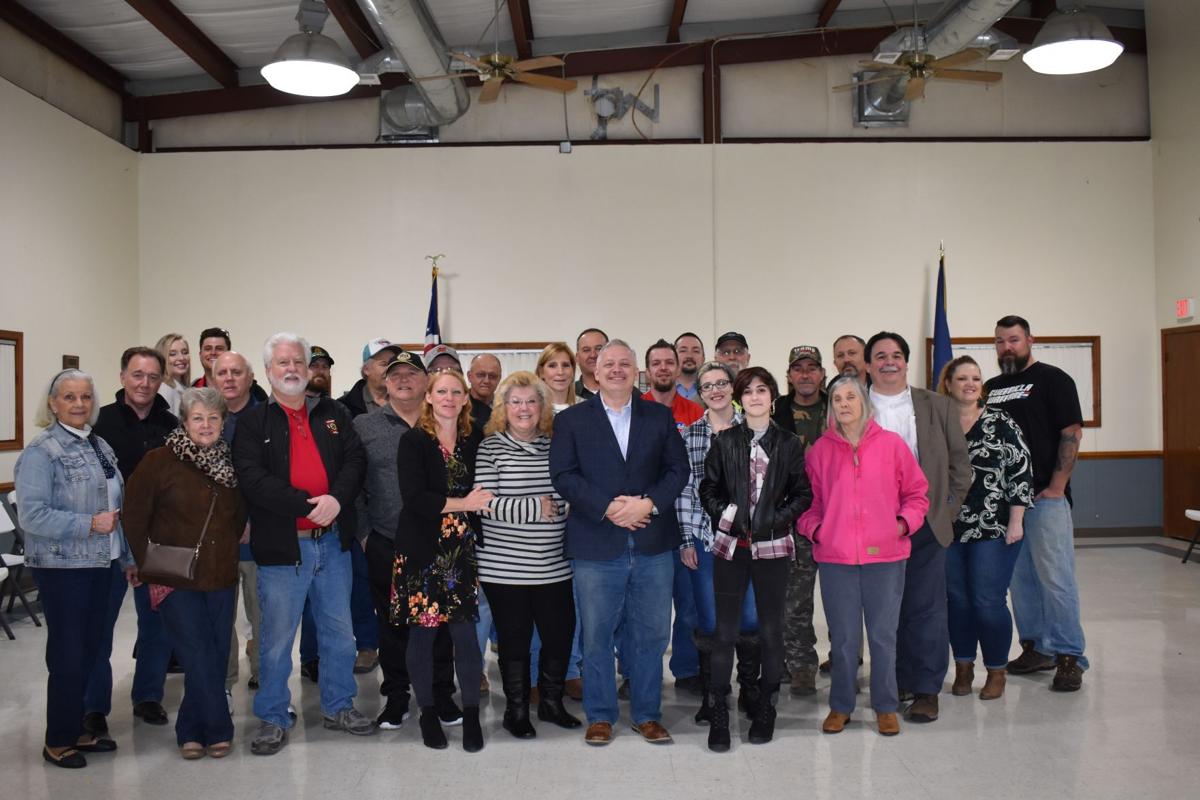 United States Congressman Denver Riggleman made a stop in Brodnax on Friday while visiting some of the towns in the district that he serves. He took the time to meet with locals and discuss some of the major issues currently within the government, such as, the impeachment trial of President Trump, the Second Amendment, and what he has done to help counties like Mecklenburg and Brunswick in regards to the rural broadband in the area. The Congressman started his short tour at the Clover Volunteer Fire Department, making a stop in Drakes Branch before coming to the Brodnax Volunteer Fire Department, and finished up in Kenbridge before heading back to Washington D.C.

The Congressman was born and raised in Virginia where he attended Burlington County College and the Community College of the Air Force, where he received an A.A.S. degree in Avionics Systems, before receiving his Bachelor’s Degree in Foreign Affairs from the University of Virginia. Congressman Riggleman served in the United States Air Force as an enlisted avionics technician. After earning his Bachelor’s degree he served as a commissioned officer with the 366th Fighter Wing and 34th Bomb Squadron. Riggleman has served as CEO of several defense contracting companies specializing in counterterrorism, critical infrastructure studies, cyber processes, etc. He and his wife now own and operate Silverback Distillery in Afton, Virginia where they make and sell Gin, Vodka, and Whiskey. Denver was elected in 2018 to the House of Representatives serving the fifth district of Virginia and is the last native born Virginian in Congress.

Congressman Riggleman spoke on the impeachment trial first stating that, “The latest news on the impeachment, Lisa Murkowski just said that she will not call witnesses and it looks like the impeachment will be over in a matter of days if not hours. So just to let you that we are almost to the end of this.” he continued, “So we’re almost to the end of this which is really exciting because we can actually get back to the work of the people, which is where I think we need to be anyway.” He went on to explain that no one wanted to use the electronic voting machines when the House was impeaching the President, instead choosing  to use the traditional green and red card voting process. “I get goosebumps now thinking about it because imagine a year and a half ago I wasn’t even in politics and now I’m involved in one of the most historic votes in the history of the United States as to the impeachment of a President. It’s pretty awe inspiring but it’s also so great to know that this was done completely for political purposes and that’s what’s scary and that’s what our founding fathers were afraid of. They knew that the President had to be accountable but they also knew that impeachment could be a political tool used by the majority.” Riggleman expressed his frustration in regards to the current impeachment trial because there is so much more that congress could be doing for the people ‘rather than this charade because the democrats really have no policy forms to sit on.”

The Congressman moved on to the topic of the Second Amendment and pointed out that he is a strong Second Amendment supporter.  One law that was passed that he wanted to discuss was a law stating that it is a felony to leave a firearm within reach of someone under the age of 18 years old, calling it reckless endangerment. “I started hunting when I was 10 or 11 and I started shooting when I was six when I got my first little 22. So my question to anyone who has hunted here, what is reckless? If I’m taught as a child not to touch that weapon, is it reckless to leave a weapon close if the safety is on? What if you have a weapon without a safety, does it have to be loaded? What if it’s unloaded? What if you have a safe? Is the safe unlocked? Is that reckless? What is intent? These are the types of things that you have to be afraid of when it comes to due process and constitutional rights. We are allowed to use our First Amendment Right to defend our Second Amendment Right, that’s something I think we’re allowed to do and I will defend that to the end.” he continued, “Votes matter, elections matter, that’s why we need your support going forward.”

Riggleman expressed his excitement about rural broadband and discussed his relationship with Secretary of Agriculture, Sonny Perdue. “He started a USDA program to try to teach electric coops and other types of providers what they need to do as far as getting rural broadband to the community and at this time and it’s staggering, this year, my first year in congress, we’ve brought in $62,000,000 for rural broadband with almost 30,000 customers served.” He explained to the crowd that he was very proud of the work that had been done so far and that he will continue to work hard for this project. “It’s not just rural broadband, its hemp, hemp crop insurance, and hemp processing and everything that we are doing to help the local community. As you know the USMCA was just passed. As you know the Phase 1 China Deal is on the table and right now I just put in a bill for small farmers where they don’t have to pay mandatory check off fees to large producers or advertisers, so they can be voluntary forms. What we’re trying to do is we’re trying to set up Southside so the economy can start to explode.” Congressman Riggleman visited a 36 acre hemp farm in Brunswick County and looked at the biomass. “We had this pile of hemp and I’m talking to a farmer and I said ‘How many acres have you planted?’ He said that he planted six acres. So I asked, ‘how did you do?’ and he said that they had never had anything like this. Each plant weighs about 1.3 pounds and they are getting 1000 to 2500 pounds per acre. They made tens of thousands of dollars off that farm. So I asked him ‘Who paid for this? Who paid for the planting?’ There’s outside states coming in, paying our farmers to grow hemp and they’re selling the biomass so the processing money is going down their stomachs. Why are we doing this? Why do we have outside people coming in paying our guys? Why don’t we have better crop insurance?” he continued, “I think we have capability for hundreds of millions of dollars in revenue. Right now I’m working on a bill called Hemp Opportunity Zones. What I’m trying to do is give tax breaks to any farmers on equipment, property, or labor. 100% tax credit over the next five years. Am I going to do it? I don’t know people might not like that but I don’t really care if they like it or not because what we’re going to do is we’re going to make Virginia the biggest hemp state in the country. That is my goal. Right now Halifax County is building a processing plant for hemp. Do you know why? Because we set up structure and the freedom for people to do what they want without the government getting in their business and that is how you do business.”

Congressman Riggleman spoke about opioid addiction in the state and steps being taken to fight the problem. “I’m a part of the Freshmen Working Group on Addiction, which is pretty incredible. We’ve got five billion dollars over five years to fight addiction. We also have high intensity drug trafficking area certification and what does that mean? We’re going to fight the Sinaloa Cartels and we’re going to fight the meth that’s coming into this district. That’s what you guys want from me. You don’t want me wasting time with a red card, going down in the well [in the House of Representatives] for impeachment. That’s what they are doing, they’re wasting our time. We have to get the impeachment over with.”

He summed up by saying that “it’s time for us to start defending our rights. I will do that. I will stay on that hill and I will die on that hill. I actually sort of enjoy this. I’m not a career politician. I don’t need this paycheck and I certainly don’t need this retirement, so I can do whatever the hell I want to do when I think it’s the right thing to do for the people.” he continued, “Do you know what the most important thing in the fifth district is? It’s you. The people. You guys don’t have to feel powerless.”