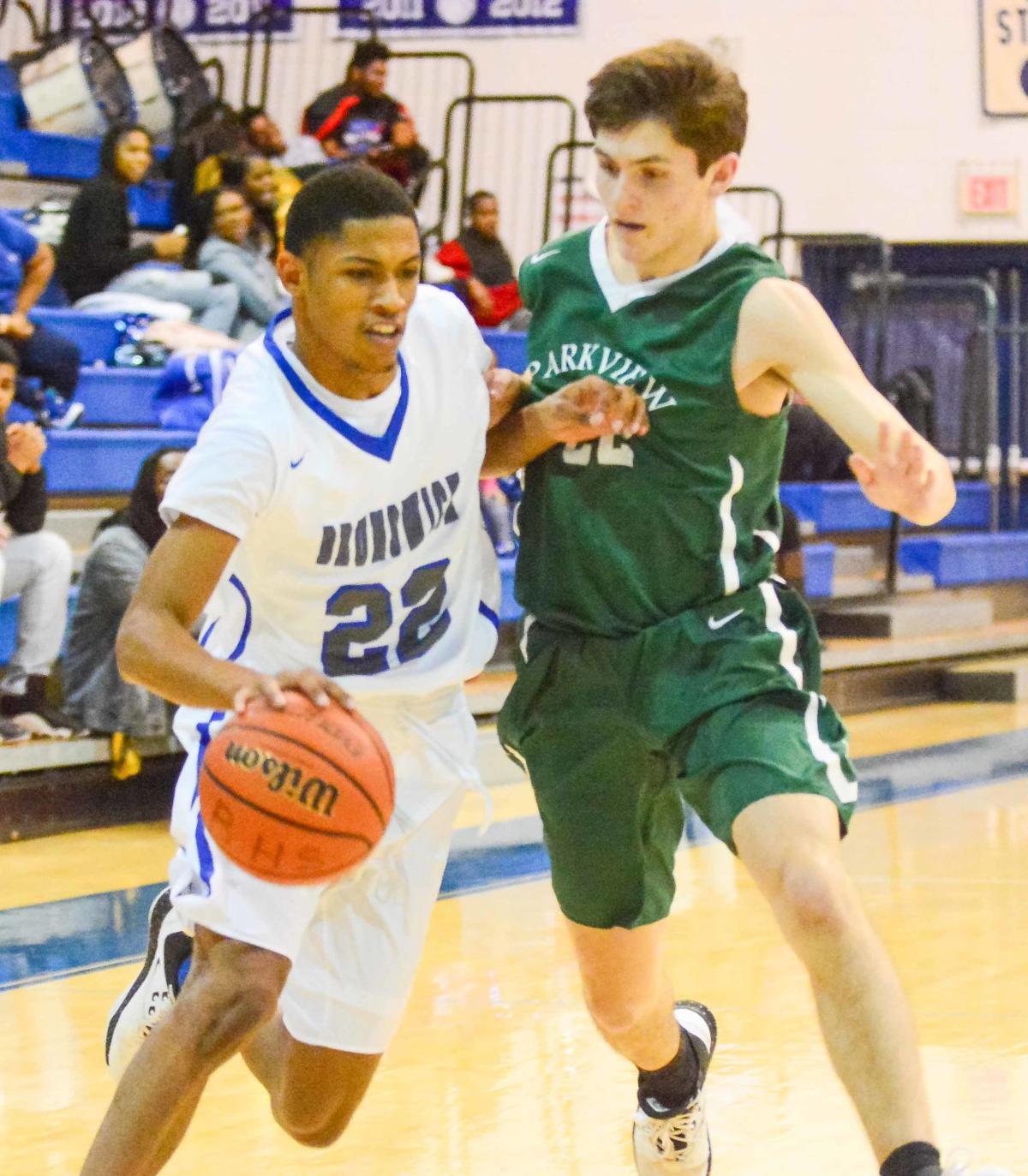 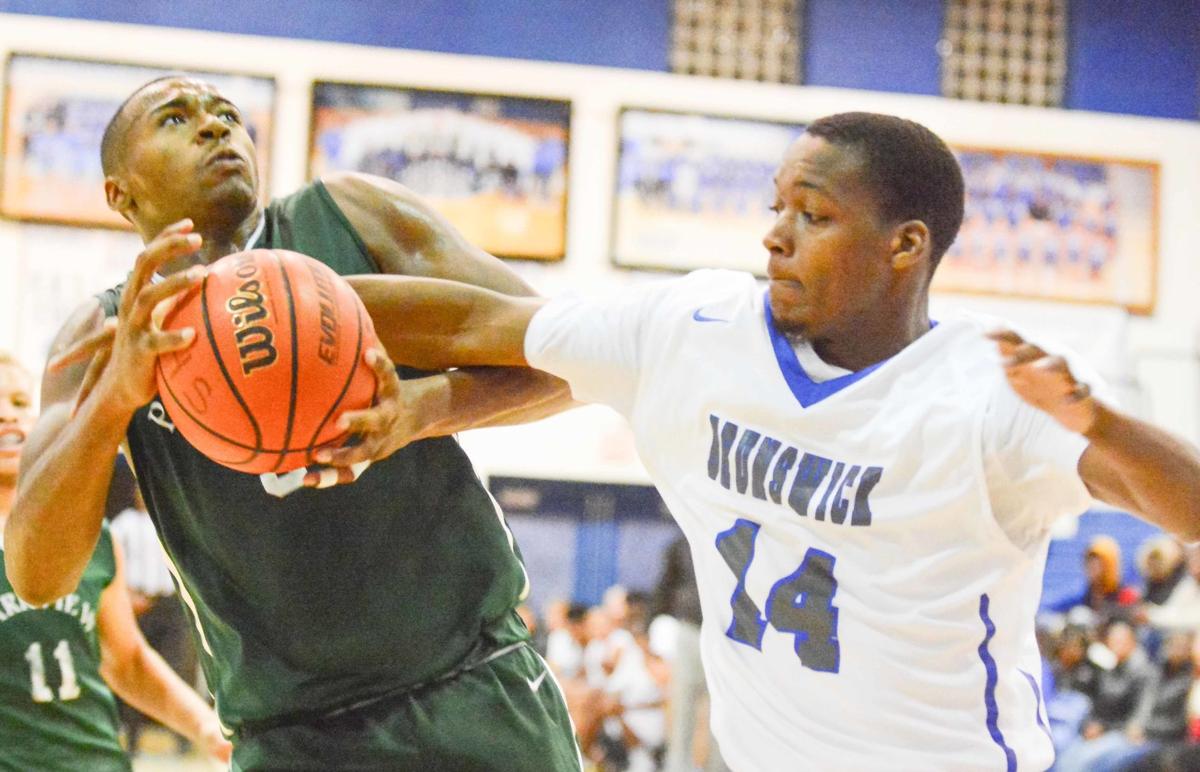 Park View’s Lanthony Joyner battled with Brunswick’s Diamonte Brodnax on this drive to the hoop in action from the Bulldogs’ 86-61 victory in Lawrenceville on Thursday night in a Tri-Rivers District tournament semifinal contest. Joyner led Park View with 11 points in the loss. (Dennis Smith)

Park View’s Lanthony Joyner battled with Brunswick’s Diamonte Brodnax on this drive to the hoop in action from the Bulldogs’ 86-61 victory in Lawrenceville on Thursday night in a Tri-Rivers District tournament semifinal contest. Joyner led Park View with 11 points in the loss. (Dennis Smith)

The win advanced Brunswick to the district tournament title game against Greensville HS while Park View saw its seven-game win streak snapped and fell to 16-8 on the campaign.

The Dragons are expected to open 3A regional play with a home contest on Friday night.

Brunswick came on firing on all cylinders against Park View, jumping out to a 17-4 lead at the 2:16 mark of the first quarter on a trey by Jadan Firman.

After Josh Boyd scored on a layup to cut the lead to 17-8, Firman scored three straight buckets as part of his 11-point first quarter to give the Bulldogs a 23-11 lead.

Brunswick increased the lead to 31-15 at the 2:11 mark of the second quarter on a rebound and putback by Traivon Callis.

Park View got a trey from Eli Fadool at the 1:14 mark to cut the lead to 33-19 but Firman hit four free-throws for Brunswick over the final minute to give the Bulldogs a commanding 39-22 lead at the halftime break.

Fadool hit a trey for Park View to open the second half scoring and a bucket by Boyd cut the Brunswick lead to 43-29 at the 4:17 mark.  Jermonta James responded with four straight points over a minute as Brunswick increased the lead to 49-29 at the 3:01 mark.

Reginald Walker heated up late in the quarter and hit three consecutive treys, the last one coming on a long shot from deep beyond half court that banked in at the buzzer, to give Brunswick a 62-41 lead.

Park View did not quit as Adam Crabel scored eight straight points to open the fourth quarter and the Dragons cut the deficit to 64-50.

Firman led all scorers with 29 points for Brunswick while Walker scored 17 and T. Callis added 15.

The Bulldogs held off a late comeback from seventh-seeded Franklin HS to earn a 68-60 victory in a tournament quarterfinal contest last Wednesday night in Lawrenceville.

Brunswick jumped out to a 19-13 lead in the first quarter behind seven points from James and five from Firman.

The Bulldogs outscored the Broncos 18-10 in the second quarter behind six points from Firman and five from Quentin Singleton to take a 37-23 halftime lead.

Brunswick outscored Franklin 13-10 in the third quarter behind five points from Callis and then held on in the fourth for the victory.

James led the Bulldogs with 19 points on the night while Callis scored 16, Firman tallied 14 and Singleton added 11.

The Dragons used a 12-0 run midway through the third quarter to break open a tight game on the way to a 56-38 victory over sixth-seeded Surry HS last Wednesday night in a tournament quarterfinal contest.

Darius Hymon scored six points during the run that allowed Park View to take a 36-22 lead at the 2:12 mark of the third quarter.

A trey by Boyd early in the fourth quarter gave Park View a 47-31 lead at the 6:23 mark as the Dragons pulled away down the stretch for the victory.

Park View spurted out to a 9-3 lead in the first quarter behind five points from Boyd but Surry answered with a 6-0 run to knot the score at nine at the 6:09 mark of the second quarter.

Boyd and Joyner scored buckets late in the stanza for an 18-13 lead but Surry cut the deficit to 20-17 at the halftime break.

The score was tied at 22 in the third quarter when Park View pulled away with the big run.

Boyd scored 19 points to pace the Dragons while Hymon added 14.