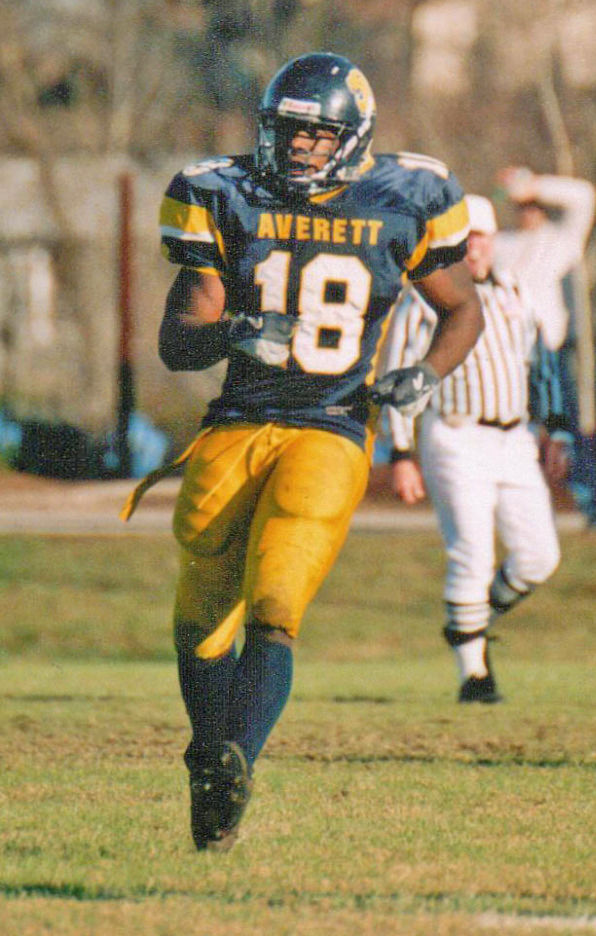 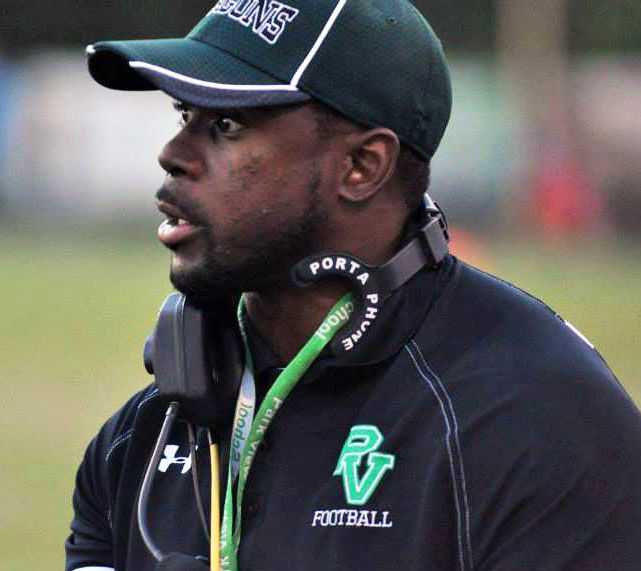 Kelvin Hutcheson was an outstanding linebacker for the Park View Dragons from 1996-2000 and also served as head coach of the Dragons from 2013-2017. (Dennis Smith)

Kelvin Hutcheson was an outstanding linebacker for the Park View Dragons from 1996-2000 and also served as head coach of the Dragons from 2013-2017. (Dennis Smith)

(With Park View High School slated to merge with Bluestone HS to form the new Mecklenburg County HS in 2022, the South Hill Enterprise is running an ongoing series that looks back at some of the outstanding athletes and coaches and their stories through the years.)

If you were a Park View football fan in the late 1990’s, you could usually count on two or three hits per game that were teeth rattlers.

Linebackers Kevin Jones and Kelvin Hutcheson were two of the biggest hitters to ever line up wearing the green-and-white.

In a recent interview, Hutcheson said wresting as a youngster with his uncle and playing football in the back yard is where his toughness was developed.

“My uncle would wrestle me every day,” he said with a laugh. “I just wasn’t afraid when I played football.”

The big hits Hutcheson would lay on opposing running backs and quarterbacks during his career at Park View from 1996 to 2000 was certainly something to see.

Hutcheson said he almost didn’t go out for football in the ninth grade.

“I almost didn’t play,” he said with a laugh. “I was in band and just wasn’t sure. Coach (David) Crowder was calling me every other day and I finally decided to play.”

He spent several weeks on the JV squad as a freshman and after the first scrimmage he moved up to varsity along with Kevin Jones and Jermaine Rogers.

Hutcheson quickly worked his way into the varsity lineup.

“We had a lot of older guys that year,” he said.

Park View struggled however and finished 1-9 on the season.

“We endured a lot of growing pains,” Hutcheson said.

Coach Wade Crutchfield took over the reins of the Park View program from Coach Swoap in 1997.

“He took more of an old school approach,” said Hutcheson.

The Dragons improved to 5-5 in 1997 and improved each year during Hutcheson’s four years.

“My senior year stood out the most,” he said.

Park View went 7-3 that season, finishing second to Nottoway in the district race. They advanced to the regionals but fell at Southampton HS.

But it was a special campaign for the local team.

The Dragons upgraded their competition that season. Park View topped Magna Vista HS in the opening game and slipped past Massaponox HS in overtime.

“I had a fumble recovery for a touchdown in that game,” said Hutcheson. “Their quarterback Joe Perry ended up being my roommate at Averett.”

Hutcheson was named to the All-Region and All-District first team in his senior campaign and was voted MVP of the squad.

He said looking back, there is nothing like playing high-school football.

For two seasons, Hutcheson not only played football but also participated in band.

“At halftime, I would play the drums,” he said.

Hutcheson said he was proud of having a chance to help get the Park View program turned around during his career.

Hutcheson drew interest from several college programs including VMI, Wingate, Clinch Valley and Ferrum but ended up deciding to go and play football at Averett University.

“It was a small school with smaller classes and it was an opportunity for me to play,” he said. “They were building something new and that appealed to me.”

Hutcheson had a tremendous career for the Cougars and was inducted into the Averett Hall of Fame in 2014.

He led the country in tackles in 2001, averaging 15.6 per game, in his sophomore campaign for the Cougars.

After taking a year off to serve in the National Guard following 9/11, Hutcheson returned and played his senior campaign, finishing with 404 career tackles to become Averett’s all-time record holder.

“It’s still standing so far,” he said with a laugh.

Hutcheson also holds program records for total tackles, unassisted tackles, assisted tackles and is tied for the career mark for sacks. He holds most of Averett's single-season tackling records and owns the top five single-game tackle totals in Averett history.

Hutcheson was named to the USA South Conference's 50th Anniversary football team in 2013.

Following college, Hutcheson went to free-agent tryouts with the Baltimore Ravens and Kansas City Chiefs and attended summer training camp with Tulsa of the Arena League.

“It just wasn’t for me,” Hutcheson said of arena football.

He returned to Averett as a Linebackers Coach in 2006.

“I was able to help them win our only conference tittle so far,” he said.

Hutcheson also had the opportunity to coach another former Park View standout Jermaine Moore in his senior season.

“That was really neat,” he said.

Hutcheson began his career as a teacher and coach at Brunswick HS in 2007, serving on Coach Harold Williams’ staff.

He earned the head coach position for the Park View varsity football team in 2013 and coached until 2017.

The Dragons went 9-1 during the regular season in his final campaign.

“We had some good years,” he said. “I enjoyed helping kids find a career path. Football does a lot for people that others don’t always see.”

Hutcheson is still teaching Physical Education/Driver’s Ed and weightlifting at Park View. He also serves as a Minster at Tabernacle Zion and trains young athletes in his spare time.

“I still have a desire to help young people,” he said.

Hutcheson said his football development escalated quickly after playing ‘Bull in the Ring’ with Chris Evans, Patrick Brown and Justin Hendrick as a player with the South Hill Yellow Jackets.

“They went at us younger guys,” he said. “It built a toughness in us.”

Hutcheson learned there can be two sides to a good football player.