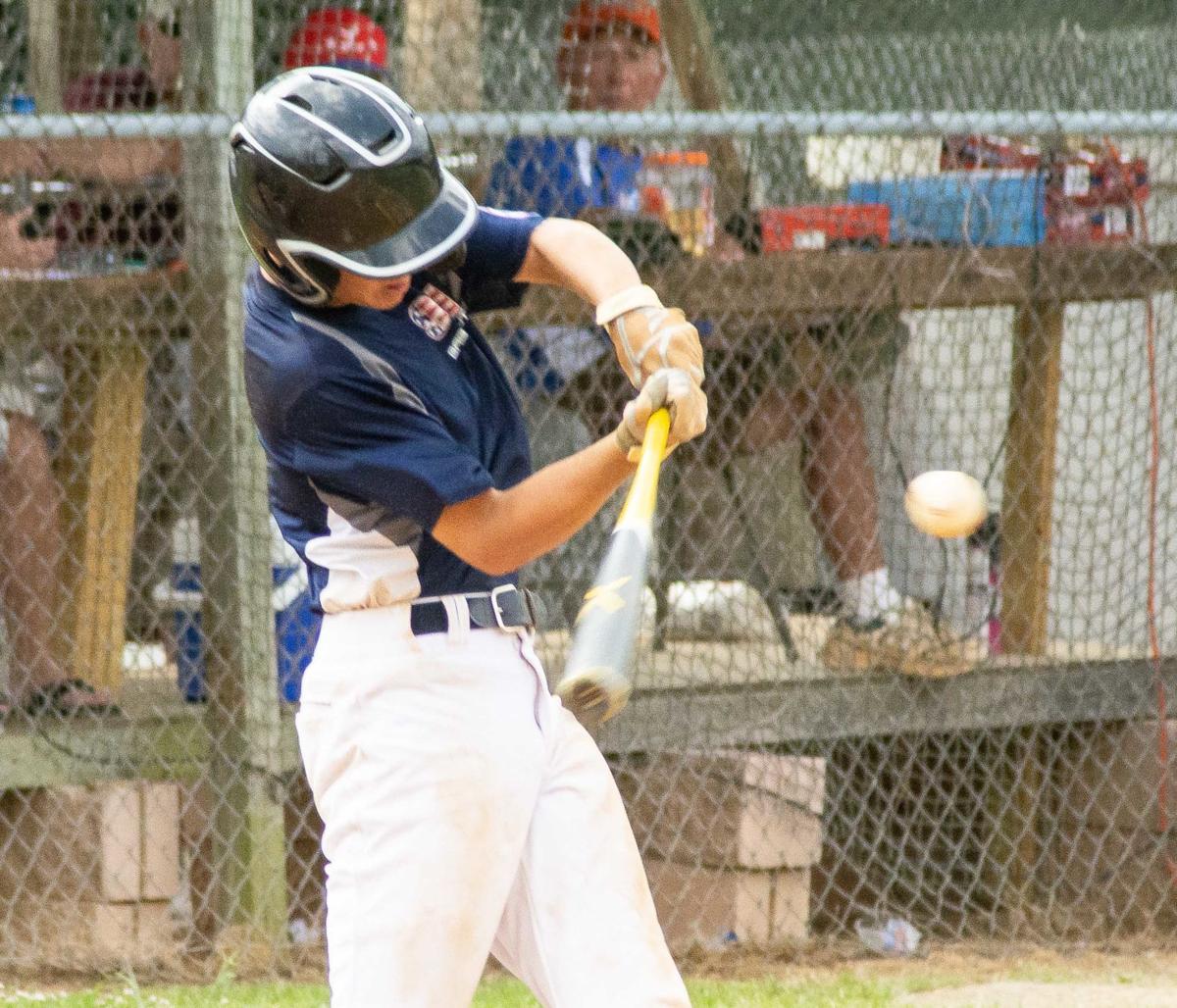 TEXTBOOK – Harrison Harper fires through the ball for a base hit in action from South Hill’s 12-7 win over Nottoway in the Babe Ruth District 2 13-15 year-old championship game in Victoria on Sunday afternoon. 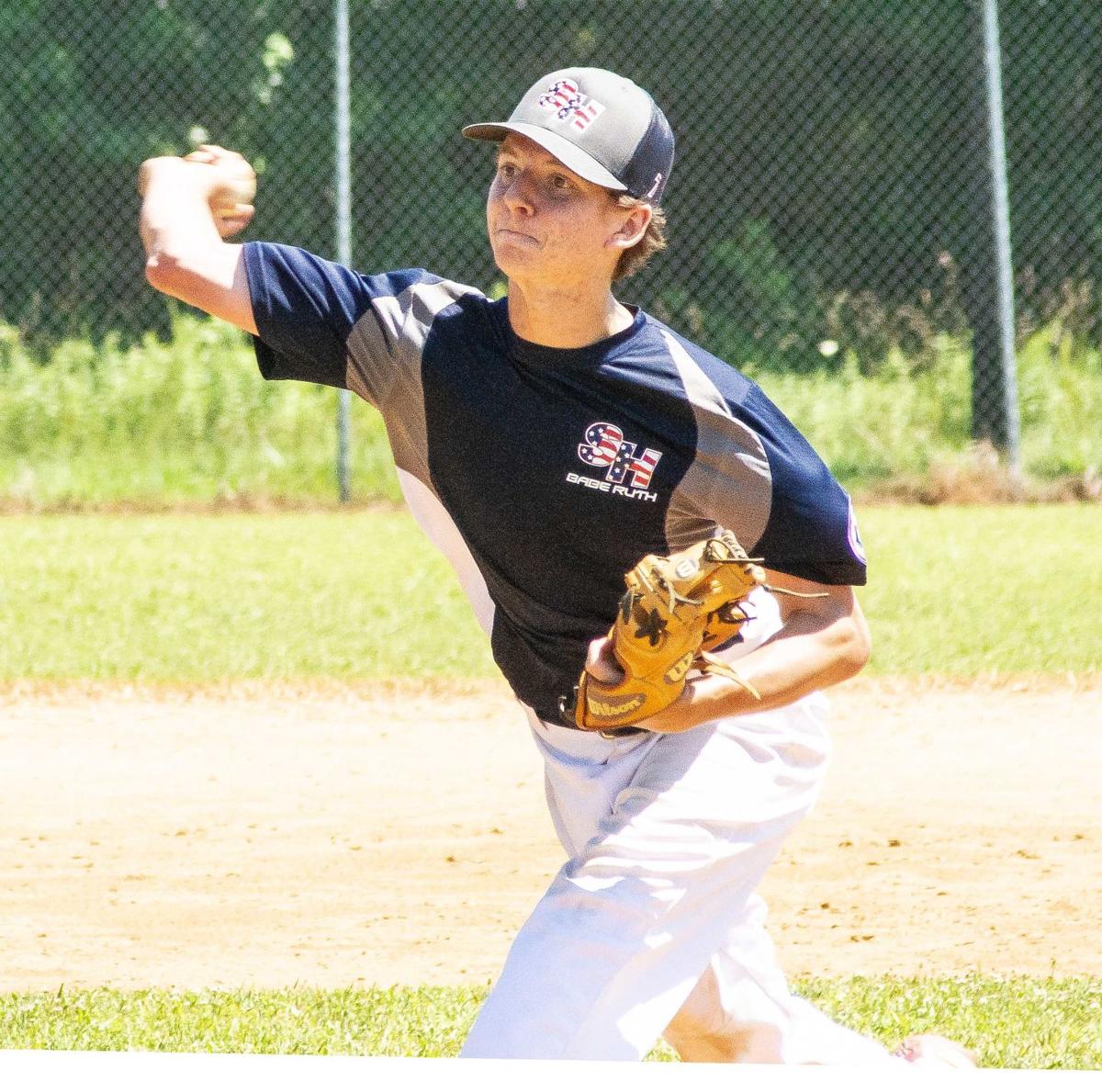 DEALING – Trey Mitchell fires to the mitt in action during South Hill’s run to the title in the Babe Ruth District 2 13-15 year-old tournament in Victoria over the weekend.

South Hill went 3-0 in the double elimination tournament to earn a bid to the state tournament that begins on July 11 in Arlington. The local team will play the District 4 champion at 4 p.m. that day in a first-round contest.

Nottoway got off to a good start in the first inning in the title game, taking advantage of two singles, a hit batsman, an error and a fielder’s choice to jump out to a 3-0 lead.

South Hill answered with one run in the bottom of the first when Trey Mitchell and Jon Lewis Temple walked and Alex Townsend scored a run with an RBI single.

South Hill tied the score in the bottom of the second when Harrison Harper walked, Jaxon Shook reached on an error, Nick Reed walked and catcher Logan Harrup singled up the middle to score two baserunners.

Nottoway took advantage of an error to score a run in the top of the third, but South Hill answered in the bottom half of the inning when Townsend walked, Tyler Turman reached on an error and Harrison ripped an RBI single. Turman scored from third on a throw to second and Chase Edwards added an RBI sac fly for a 6-4 lead.

South Hill scored another run in the bottom of the fourth when Temple reached on an error and scored on an RBI single by Townsend.

Nottoway answered in the top of the fifth, scoring two runs on an RBI groundout and a single to knot the score at seven.

South Hill once again answered in the bottom of the inning when Harper doubled and Edwards followed with an RBI single for an 8-7 lead.

Dakota Clark and Harrup followed with singles to load the bases, and Mitchell scored two runs on a fielder’s choice. Temple then hit an RBI single to give South Hill an 11-7 lead.

South Hill added a final run in the bottom of the fifth when Townsend doubled and Turman followed with an RBI single.

Mitchell earned the win on the hill in relief of Reed.

The local team took a 1-0 lead in the first inning when Colby Elliott singled and scored on an RBI single by starting pitcher Alex Townsend.

Elliott followed with a single to score two more runs and came all around the bases to score on two throwing errors to give South Hill a 7-0 lead. Harrison Harper doubled later in the inning to plate a run and increase the lead to 8-0.

Nottoway fought back in the third inning by scoring five runs to cut the lead to 8-5.

South Hill added three more runs in the fourth inning, when Harrup singled and scored on an RBI single by Mitchell. After Temple singled, Townsend scored both baserunners with a single for an 11-6 lead.

Mitchell relieved Reed in the sixth and closed the door on the victory, sending South Hill to the championship game.

Mitchell, Elliott, Townsend, Turman and Harrup led South Hill with two hits apiece in the game, while Temple and Reed had one apiece.

South Hill cruised past Lunenburg 19-0 on Thursday night in their first game of the tournament.

The local team went right to work in the first when Mitchell singled and Elliott walked and scored on a single by Turman.

South Hill increased the lead to 4-0 in the second, when Mitchell and Temple scored on a double by Elliott.

The local team plated four runs in the third inning when Edwards walked, Reed singled, Harrup doubled and Elliott singled for an 8-0 lead.

Harper singled and scored on a single by Harrup in the fifth for a 9-0 lead.

The local team blew the game wide open by scoring 10 runs in the sixth inning to pick up the lopsided victory.

Mitchell scored three runs and had a hit for South Hill, while Elliott and Harper had two hits and scored two runs apiece.

Edwards picked up the win on the mound, recording 10 strikeouts over five innings.