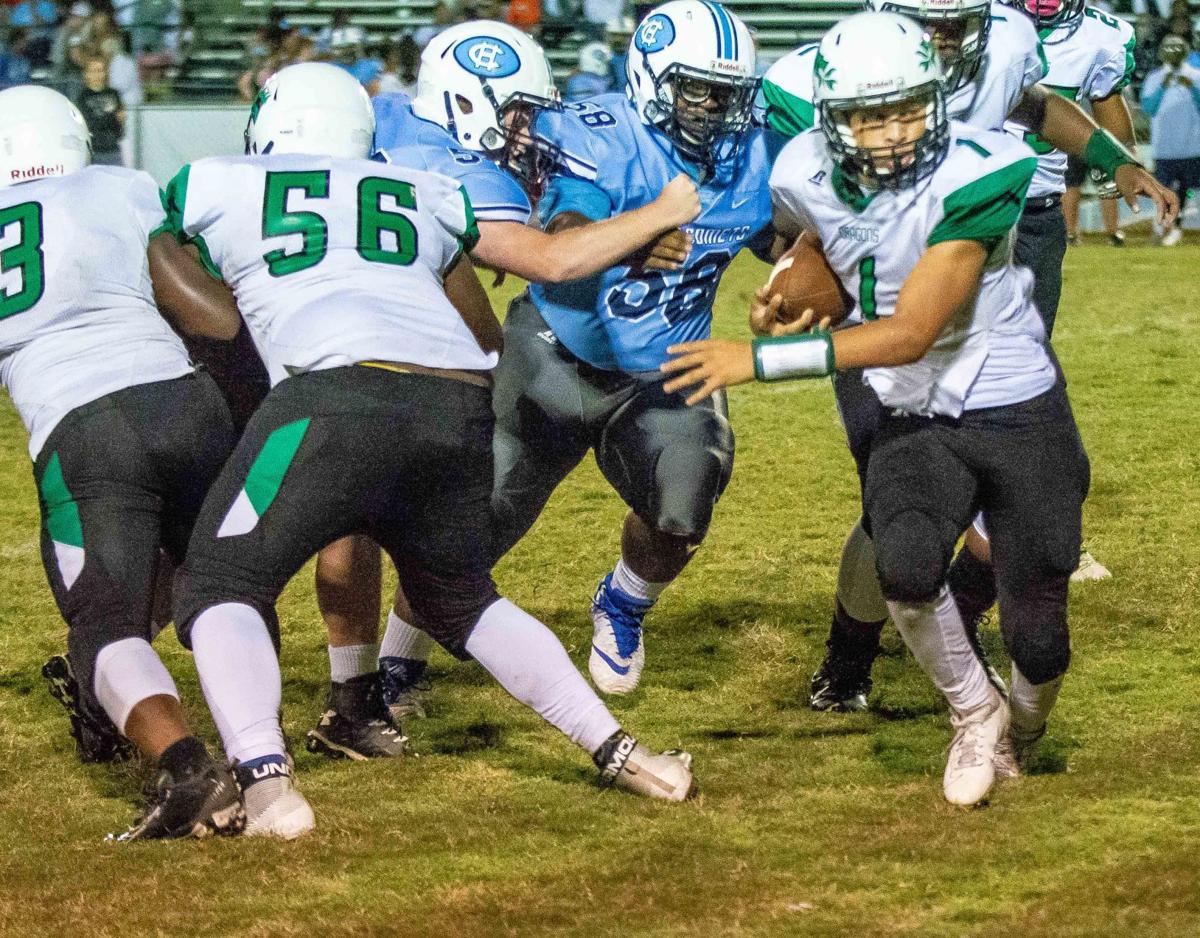 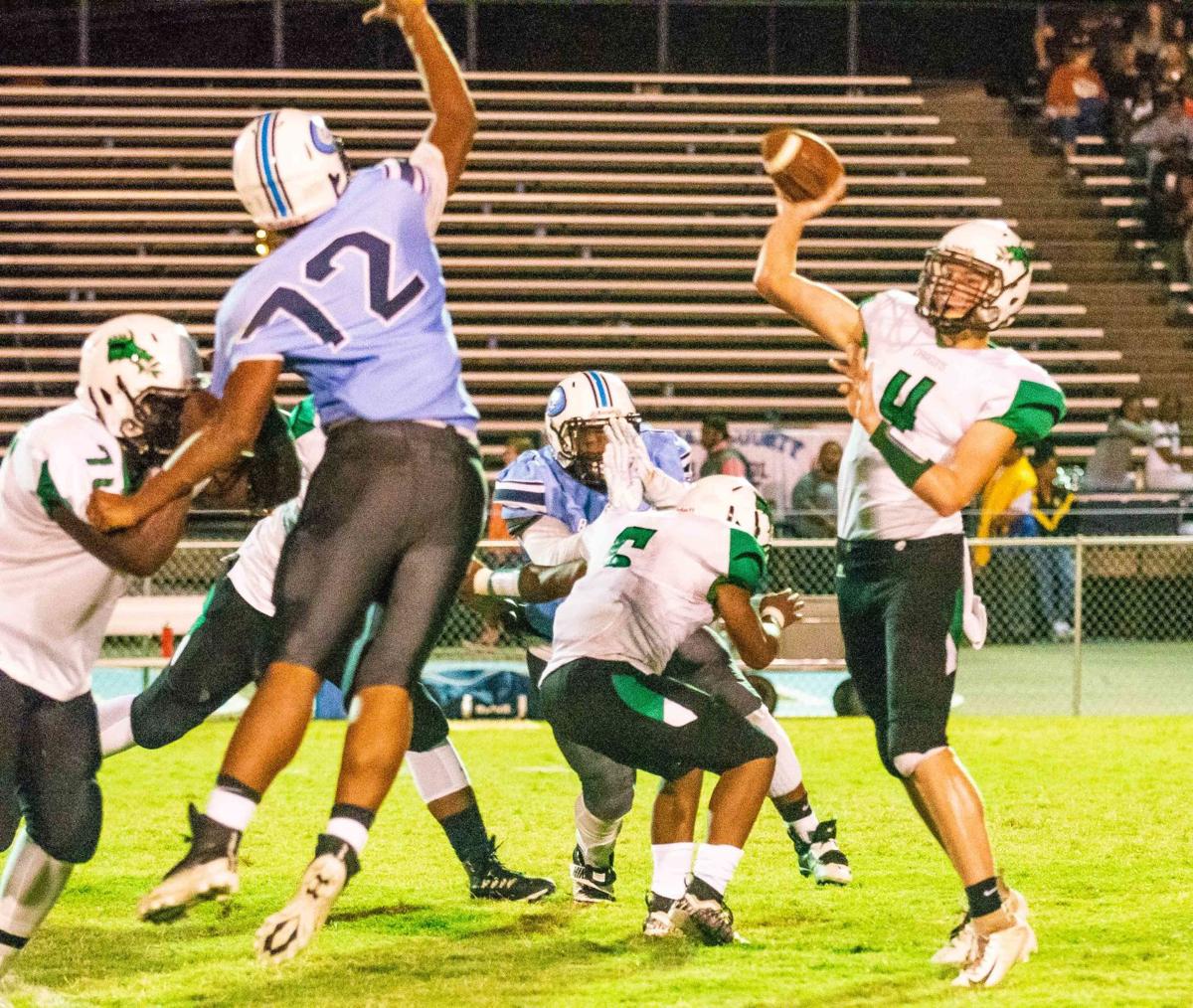 The loss dropped the Dragons to 2-1 on the season while Halifax improved to 3-0.

The Comets scored on four of their first five possessions to jump out to a 27-0 halftime lead but Park View fought to the end, scoring twice in the second half to make the final score respectable.

“We’ve got some things to work on,” said Park View coach Tony Whittingham, Jr. “Sometimes it can be good to have some adversity. We are a little dinged up but I think we’ll be okay.”

The Dragons received the opening kickoff and converted the first big play of the game when junior quarterback Adam Crabel hooked up with Dontavious Wilson on a 46-yard pass completion to the Halifax 17-yard line.

The Comets defense stiffened however and a fourth down pass fell incomplete.

The Comets got a big run from Christian Mack to move into the Dragons’ redzone and Thomas Lee hooked up with William Davis on a 38-yard touchdown pass. Gabe Brankley added the PAT for a 7-0 lead at the 7:17 mark of the opening quarter.

After a Park View punt, Halifax went back to work and moved 58 yards on nine plays to get on the board again on a 4-yard touchdown run by Kameron Roberts. The PAT by Brankley gave the Comets a 14-0 lead at the 1:31 mark of the first quarter.

The Dragons fumbled on their next possession but the Park View defense stopped Halifax on fourth-and-2 to get the ball back.

Following a Park View punt, Halifax hit paydirt once again on a 36-yard pass completion from Lee to Davis and a PAT by Brankley for a 21-0 lead at the 7:11 mark of the second quarter.

The Comets picked off the Dragons on their next series and Jarome Davis returned the interception for a 56 yard touchdown and a 27-0 lead.

Park View got a 20-yard pass completion from Crabel to Wilson and an 18-yard run from Jaylen Brown to move to the Halifax 10-yard line late in the first half but the Dragons could not get into the endzone before the halftime buzzer sounded.

The Comets took the opening kickoff for the second half and scored again when Lee hit Brandon Davis on a 55-yard touchdown pass. The PAT by Brankley gave Halifax a 34-0 lead at the 9:12 mark.

The Dragons got going late in the third quarter and got a 10 and 14-yard run from Josh Boyd to move onto the Halifax side of the field. A 19-yard run by Boyd advanced Park View to the 11-yard line. After a 9-yard run by Daivon Robinson, Crabel scored on a 2-yard run to cut the lead to 34-6 at the 5:46 mark of the fourth quarter.

After stopping Halifax on fourth down at the 34-yard line on their next series, Boyd broke a 34 yard run just short of the goal line and Crabel scored on a 2-yard touchdown run with 1:22 left in the game. Nick Moody scored on a 2-point conversion run to cut the final margin to 34-14.

Boyd led Park View with 102 yards rushing on 21 carries while Crabel completed 4 of 11 passes for 72 yards with Wilson grabbing two balls for 66 yards.