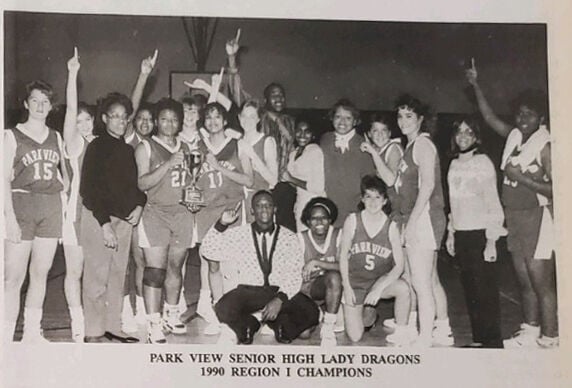 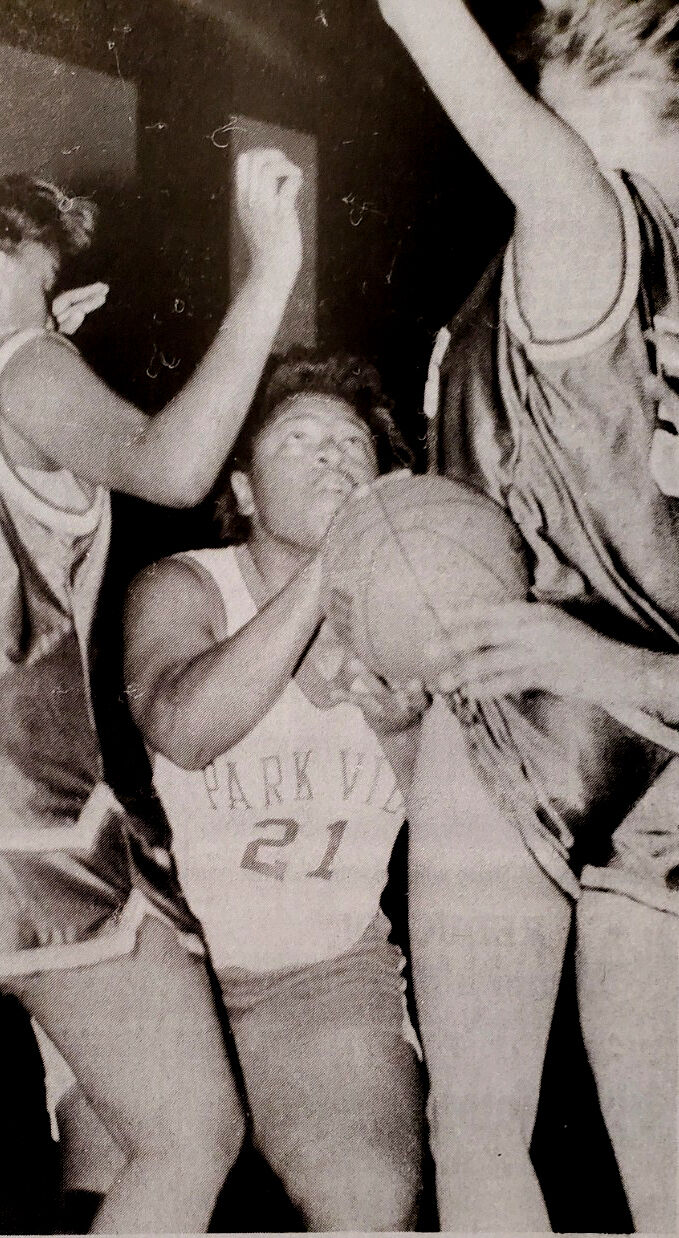 Marcia Whittingham, was the muscle on the inside, for the Park View HS girls’ basketball team in 1990 that won a Region I title and advanced to the program’s first VHSL state tournament appearance. (Dennis Smith photo) 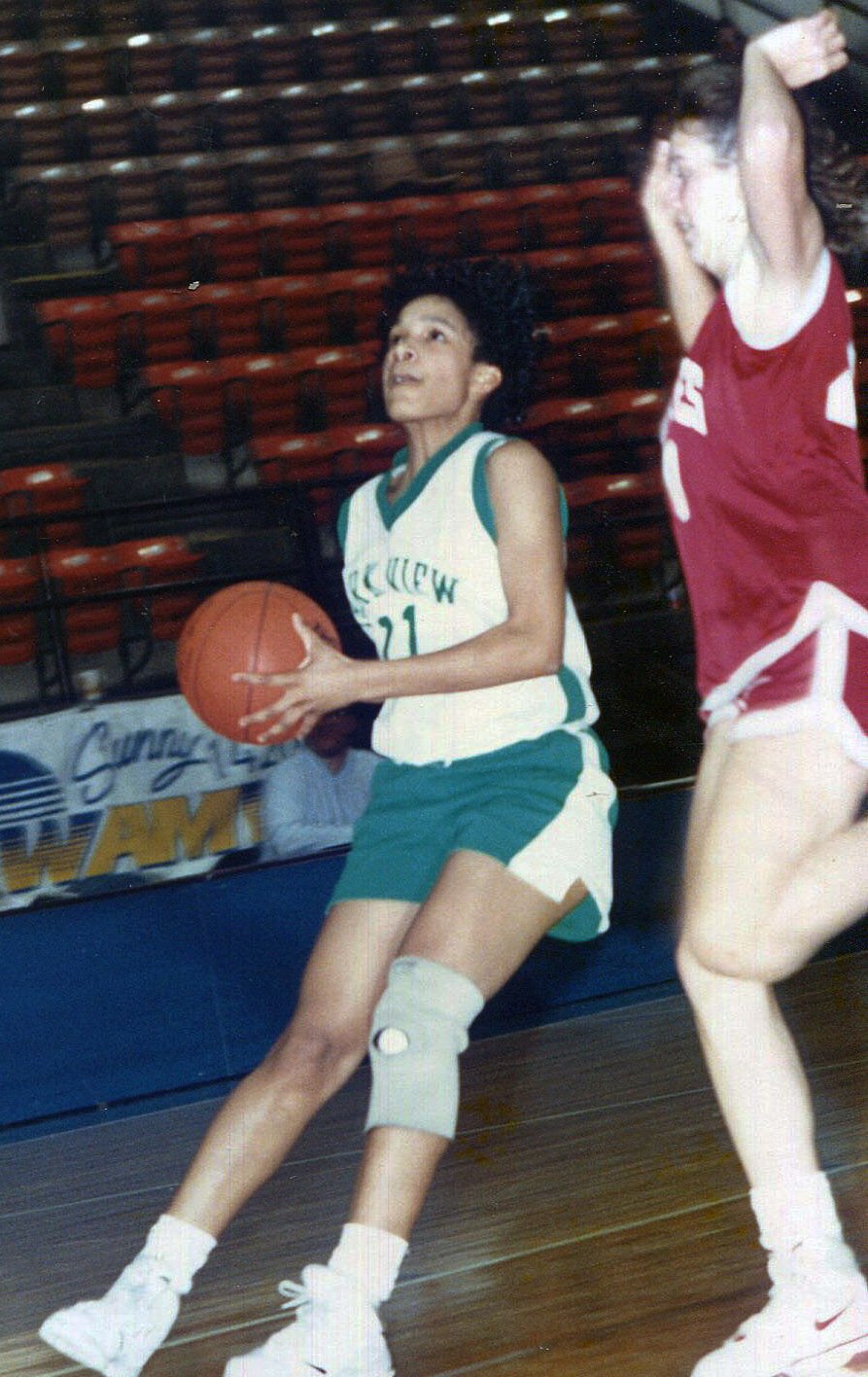 Marcia Whittingham, was the muscle on the inside, for the Park View HS girls’ basketball team in 1990 that won a Region I title and advanced to the program’s first VHSL state tournament appearance. (Dennis Smith photo)

(With Park View High School slated to merge with Bluestone HS to form the new Mecklenburg County HS in 2022, the South Hill Enterprise is running an ongoing series that looks back at some of the outstanding athletes and coaches through the years. This is story No. 7 in the series.)

Senior Lazetta Rainey was the point guard that ran the show and senior Marcia Whittingham was the muscle on the inside for the first Park View High School girls’ basketball team to ever win a Region 1 title and advance to the VHSL state tournament.

The two former stars reminisced recently about that special season in 1990 when the Lady Dragons topped Brunswick HS for the first time in 10 years, 45-43, in the regional title game in Emporia.

“The season before my junior year, we went to camp at Wake Forest,” said Whittingham. “There were six of us (from Park View) that went and that helped bring us together.”

“We pushed each other,” said Rainey who is now Lazetta Rainey Braxton. “We didn’t have drama. We had love and respect for each other.”

Park View went 16-4 during their junior year, helping set up the big run to the state tourney in 1990.

The Lady Dragons peaked at the right time entering the Region 1 tournament beating Franklin and an undefeated Tabb team to advance to the title game.

“Ms. Phyllis Etheridge was our coach,” Whittingham said. “She could push you further then you wanted to go.”

“She was very serious about us being serious,” Rainey said with a laugh. “She was also very protective of us.”

In the regional championship, Rainey scored 13 points on 7 of 9 shooting from the free-throw line while Whittingham scored 10 and was 6 of 6 from the charity stripe. Feggins scored seven points in the victory while Watkins and Thompson scored five points apiece, Edmonds scored three and Crowe added two.

Coach Etheridge said following the historic win that defense was how the Lady Dragons captured the title.

“It was sheer defense all the way,” she said.

Rainey said she has a special memory from that contest.

“It’s an inside family joke,” she said, “but I passed out after that game.”

The big victory earned the girls’ a state tournament berth in Salem. The entire student body gathered in front of the school as the team departed on a chartered bus for the trip.

The Lady Dragons struggled from the free-throw line in their state appearance against a much bigger Amherst squad, missing 20 free-throws in the first half alone and never recovering in a 59-37 loss. Rainey led Park View with 19 points in the game.

Rainey earned First team All-District and All-Region honors for Park View that season while Whittingham was named to the second team.

“I wasn’t that tall but I was tough and gritty,” Whittingham said with a laugh.

“Both were great team leaders,” she said. “They were well respected.”

Rainey received a basketball scholarship offer from Delaware State but decided to go to the University of Virginia and major in Economics and International Business. She later attended Wake Forest University where she earned her MBA in Finance.

She said she did try to walk on at UVA but basketball was no longer her passion at that time.

“I didn’t have the discipline or the drive for that,” she said.

Rainey said growing up she watched how hard her parents worked to provide for their family and she wanted to assist others in improving their financial situation.

“I was able to see some of the highs and lows,” she said. “I’ve always had my parents in mind in my career.”

Rainey is currently co-CEO of 2050 Wealth Partners. She is a nationally-recognized financial expert and has appeared on NBC Nightly News with Lester Holt, Nightly Business Report, and CNBC’s Closing Bell.

Whittingham drew interest from Virginia Union University and Elon after her high-school career but decided to go to Virginia State University and focus on academics as an Engineering major.

She worked out with the VSU team her first year there but never pursued playing after that.

She said many lessons were learned playing sports at Park View.

“It gave me a lot of confidence,” she said. “Sports gave me the opportunity to be able to problem solve, communicate and develop relationships.”

Whittingham graduated from VSU with a degree in Mechanical Engineering. She currently lives in Richmond and is working as a Direct Report Professional.

Two great leaders were the catalyst behind Park View’s big run in 1990.