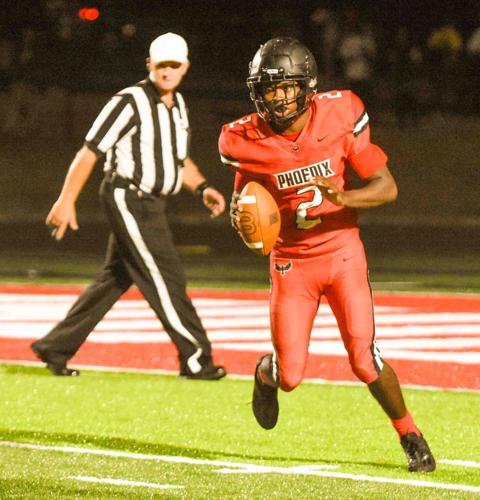 Mecklenburg County HS quarterback Tomar Logan was able to find some open real estate on this rush in action against Central of Lunenburg HS in Baskerville on Friday evening. (Dennis Smith) 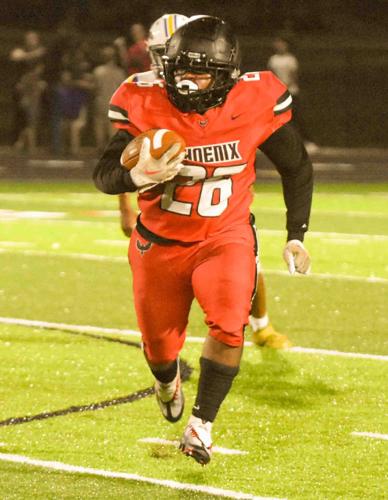 Khalil Hart had a big second half and rushed for 129 yards on 13 carries with two touchdowns in the Mecklenburg’s first home football contest at Phoenix Field. (Dennis Smith)

Mecklenburg County HS quarterback Tomar Logan was able to find some open real estate on this rush in action against Central of Lunenburg HS in Baskerville on Friday evening. (Dennis Smith)

Khalil Hart had a big second half and rushed for 129 yards on 13 carries with two touchdowns in the Mecklenburg’s first home football contest at Phoenix Field. (Dennis Smith)

Unfortunately for the home team, several costly mistakes piled up early and visiting Central of Luneburg High School pulled away for a 54-20 victory.

“I feel like our guys just weren’t ready and we didn’t stay true to what we wanted to do,” Mecklenburg County coach Kelvin Hutcheson said after the contest. “We can’t have the mistakes we had tonight against a quality team like Lunenburg. This was not the effort that we wanted for our fans and community.”

Hutcheson said he thought the team’s effort and focus was much better over the last quarter and a half when the Phoenix was able to put 20 points on the scoreboard after being shutout 34-0 in the first half.

“We are a young team across the board,” said Hutcheson. “I thought the guys showed some heart        in the second half. We’ve just got to be more disciplined. We will look at the film and come back ready to play on Friday night when we welcome a good Lee team.”

The Phoenix were whistled for a 15-yard penalty on the sideline after the play and then fumbled on the next snap from scrimmage.

Drew Stone took the first handoff from scrimmage for Lunenburg and burst outside for a 61-yard touchdown run as Ryan Barnes added the PAT for a 7-0 lead at the 10:47 mark of the first quarter.

A bad snap on a punt attempt by the Phoenix allowed Lunenburg to take over deep in Mecklenburg territory three minutes later and Donelle Jones, Jr., scored on a 4-yard run as the PAT gave the visitors a 14-0 lead at the 7:38 mark of the opening quarter.

The Phoenix went for it on fourth-and-7 on their next offensive series but a pass fell incomplete and the Chargers took over near midfield.

Two plays later, Kemarion Watson scored on a 41-yard touchdown run as the PAT increased the Chargers lead to 21-0 at the 4:48 mark.

Mecklenburg picked up one first down on its next offensive series but were forced to punt on fourth and long and Lunenburg added another score on a 28-yard touchdown run by Amarion Moore and a PAT by Barnes for a 28-0 lead at the end of the opening quarter.

Lunenburg came up with an interception on the Phoenix next series but Mecklenburg’s Jaylin Haskins came up with a fumble recovery on the next play.

The Phoenix went for it again on fourth down late in the second quarter but were stopped and Lunenburg added a score on a 1-yard touchdown run by quarterback Connor Mattox at the 2:07 to take a 34-0 lead to the halftime break.

Lunenburg got on the scoreboard again on their first possession of the second half when Jones scored on a 30-yard touchdown run as a PAT by Barnes increased the lead to 41-0 at the 6:50 mark of the third quarter.

The Chargers came up with an interception on Mecklenburg’s first play from scrimmage on the next offensive series and Mattox took it to the house for a 24-yard touchdown return and a 48-0 lead at the 6:05 mark of the third quarter.

The Phoenix fumbled the ball on the first play of their next series and Lunenburg got a 31-yard touchdown run by Watson to open up a 54-0 lead at the 3:40 mark.

Mecklenburg got on the scoreboard on their next series when Khalil Hart broke two tackles on the visitors’ sideline and scrambled 65 yards for a touchdown to cut the lead to 54-6 with 1:43 left in the third quarter.

Following a Lunenburg punt, Mecklenburg put together its best offensive drive of the night. A 16-yard run by Hart moved the Phoenix onto the Lunenburg side of the field and he followed with a 15-yard run to move deeper into Central territory. Hart scored on a 2-yard run at the 7:17 mark of the fourth quarter to cut the lead to 54-12.

A fumble on Lunenburg’s next play from scrimmage was scooped up by the Phoenix Jaylin Haskins who scampered 45 yards for a touchdown return to cut the Lunenburg lead to 54-20 after Logan added a 2-point conversion run at the 6:52 mark.

The Chargers moved inside of the Mecklenburg redzone on their final offensive series of the night but took a knee instead of trying to put any more points on the board.

The contest ended on a 24-yard pass completion from Logan to Chase Crabel as the clock expired.

Mecklenburg will return home on Friday to face Lee County (NC) at 7 p.m.

Lee will come in at 3-0 after earning a 34-28 win over Southern Vance last week.