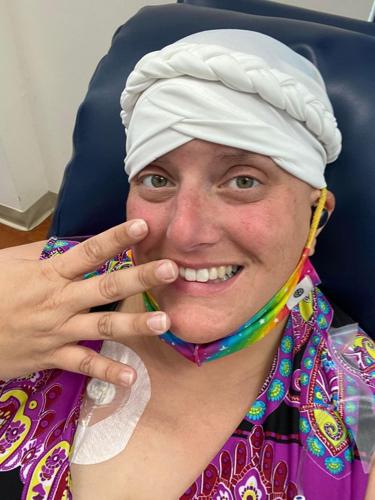 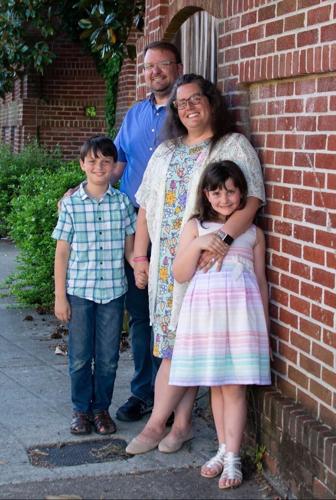 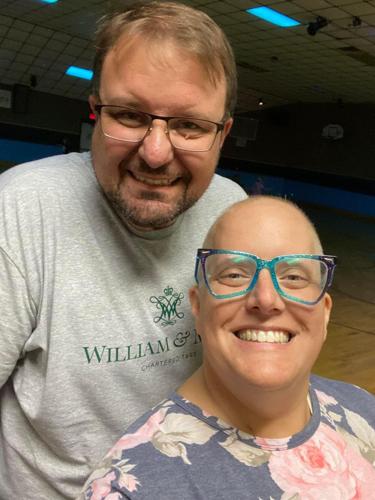 In November of 2021, Erin Matzen went for a yearly health physical only for her General Practitioner (GP) to tell her that she found something strange in her breast exam.

“She thought it was dense tissue and wanted to get a mammogram so we could get a baseline and not worry about it every year.  Even at that point, I wasn’t worried. I have had a lot of friends and family who have had dense tissue.  I was convinced that is what it was too. I went in for my mammogram the day before Thanksgiving. Luckily, both a standard mammogram and a 3d ultrasound was ordered.  After the standard mammogram I was ushered back to get the ultrasound, and I’ve watched enough Grey’s Anatomy to know that the dark spots were not good.  This was further confirmed when the technician went and got the radiologist, who told me things didn’t look great.  From there I had to get a biopsy, which led to the diagnosis.”

Erin was blindsided saying that she never thought that it could be cancer. She missed a call from her radiologist and GP while she was working as a teacher and that was when she really started to worry.

“I couldn’t reach either of them during my planning, so I just worried about it the entire rest of the afternoon. At the end of the day I finally was able to get a hold of my GP, who just said ‘I am so sorry, Erin.  Anything you need, we’re here for you.’ To which I replied, ‘I guess that means you know something I don’t know…. Did you see my results?’ She didn’t know that I didn’t know, and apologized profusely.  I held it together on the phone, but when I got back in the building, I could not hold it in.  Luckily, I teach with another South Hill native, Brittany Cage, who quickly rushed me into an empty room and held me while I sobbed. She left so I could call Joe and tell him, and then I pulled myself together so I could go get my kids and head home.”

Erin and her husband Joe decided not to tell anyone about her diagnosis until they spoke to the radiologist to find out what they were really up against.

“We needed my aunt, Virginia Hall, to come be with the kids for that appointment, so she knew something was going on. After talking to the medical team and getting the full diagnosis, I decided I wanted our approach to be as straightforward and matter-of-fact as possible.  We came home from the appointment and told my aunt and the kids.  We explained to the kids that cancer meant some of momma’s cells were sick and trying to destroy all of the healthy cells, but that we were going to do everything to make sure that we got rid of all the bad cells. Then we made a lot of Facetime calls - my sister, Joe’s dad, his sister, my great-aunt. I knew if I was going to get through it, I needed a lot of love, support, and prayers! Most of my friends knew that I was waiting for test results so I updated them through our group text. A few days later, I posted it to Facebook.  I’ve been pretty open and transparent about the entire process there.”

“The radiologist told us the cancer was small and caught very early. At first, we were very optimistic my treatment would consist of a lumpectomy and a few zaps of radiation.  However, my MRI showed multifocal disease, which means the original tumor shot off a few friends…. Even though they were all small, there were a total of 3 tumors spreading over 9 cm. My surgeon told me that breast conservation was no longer an option. After lots of discussion, research, and prayer, I decided to go ahead with a bilateral mastectomy. At this point, we were hoping that would be it.  I had three checkpoints for avoiding chemotherapy. I needed clean margins, no lymph node involvement, and since my cancer was estrogen-positive, an oncotype score of less than 19. My surgery was smooth and successful, with clear margins and no lymph node involvement, but my oncotype came back with a score of 31 - moderately high and with a 20% chance of recurrence.  Because of this, I followed medical advice and did 4 rounds of taxotere and cytoxan chemotherapy. I had chemo every 3 weeks for a course of 12 weeks. My last dose was Jun 27, 2022!”

Erin received support from many friends and family members. People never hesitated to bring meals or entertain the kids while she was at appointments or feeling down.

“One of my dear, dear friends here in Smithfield set up a meal train for us when I had surgery and there was a constant parade of food coming through the door. My school also fed me well. Each grade level took a week and just showered me with love. Teachers also helped me get the kids to and from school every day. They would come get them and bring them home. I also got so many loving, touching notes and cards. I actually took a strand of yarn and ran it along the banister and hung cards there each time they came in. I looked at them every day and drew strength from them.  I only took that down in the past week, putting them in a memento box to look back on and remember that love and support when I need to.”

Like many who are diagnosed with cancer and have to undergo chemotherapy treatment, Erin knew she would eventually lose her hair.

“I tried to see it as an adventure - an opportunity to do something I’d never done before. I tried to pretend like I didn’t really care, but I definitely had a lot of feelings when it started coming out in huge clumps. I did have a few insecure moments, but I also found a way to embrace it too. I wore a head covering to school, mostly for the students and not really for me. I knew it would be shocking and unsettling for them. But when I was running around town during the summer, I rarely covered my head. It was just too hot.”

After a hard battle, Erin is now officially cancer free but her life has definitely changed. She will continue to monitor herself and will be on medication for the next five to seven years.

“Because my cancer was estrogen positive, I will have to take daily medication to stop all estrogen production in my body for the next 5-7 years to prevent a recurrence. This has essentially put me in a medically induced menopause, which is hard to wrap my mind around at 39.  It also causes stiff joints, sore muscles, and other fun menopause symptoms, which I am learning to navigate…. That has been the hardest part for me, mentally. - that I am supposed to be “done” fighting cancer, but I’m still in a small battle to prevent it from returning. However, I want to do everything I can to prevent it from returning. I want to be here and healthy for my kids and family as long as I can.  I don’t want another summer where my kids are bored because mommy can’t get off the couch since she’s so sick from chemo. So if it takes some stiff hips and achy bones to prevent that from happening again, I’m all in.”

“To anyone currently going through cancer, I say that your feelings are valid, no matter what they are.  Anger, sadness, frustration, fear…. Tell people what you need and let them help you! It’s exhausting to fight alone - let people carry you. As much as I hate that anyone has to go through this battle at all, I am so glad I had people in the trenches with me, or who had been there and knew what I was going through. A friend from high school, Shannah, and I were diagnosed about the same time, so we were constantly checking in with each other. My school guidance counselor had been diagnosed a few months before I was, so we were going through it together at school. And my friends Kristen and Ashley had both fought cancer the previous year, so I was constantly peppering them with questions. My aunt made the drive out to Smithfield anytime I needed her, and friends took the kids anytime I needed a helping hand. I am so grateful for all of the love and support we received!”