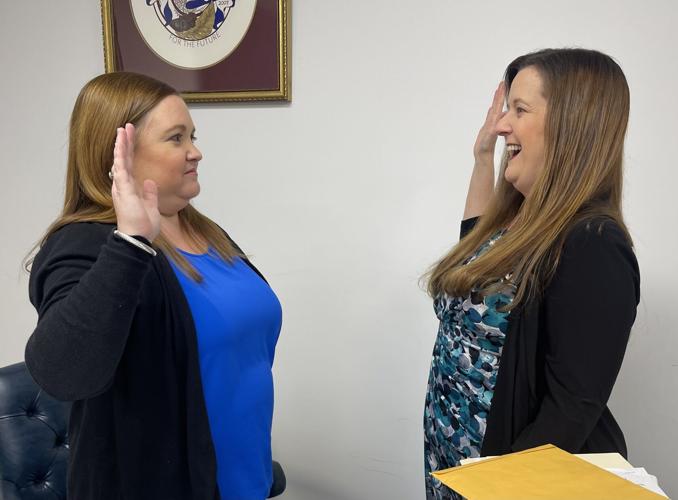 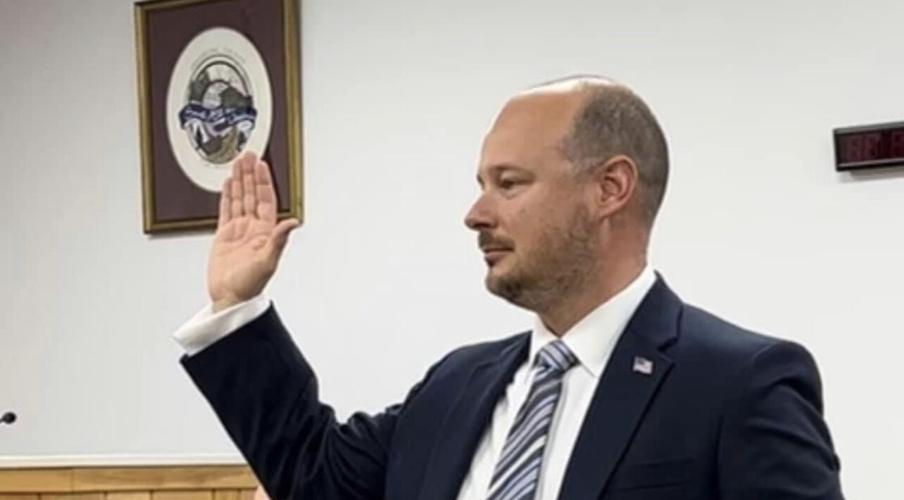 Newly elected Council member Michael Smith is sworn in before the start of the first meeting of 2023.

Newly elected Council member Michael Smith is sworn in before the start of the first meeting of 2023.

A public hearing was held in regards to a request by AJP Group, LLC and Pomp Boys Enterprises, LLC to utilize 200 and 316 W. Danville Street, 208 S. Brunswick Avenue, and 207 S. Lunenburg Avenue for automobile assembling, painting, upholstering, repairing, rebuilding, body and fender work, truck repairing and overhauling, and for automobile sales and service.

Tony Pompliano spoke during the hearing saying that the business was grateful to become part of the community and honored to be the custodians of such a historical building in town.

“We intend to be good community citizens, both in terms of services we provide as well as the community outreach for potential customers.”

Pompliano continued, “We consider ourselves to be of the highest character. I know there are a lot of negative rumors and things but anybody that’s been in business for a long time knows you don’t have to do anything wrong to be sued or anything like that but we’ll work through it and we can only hope and pray that we get the same notoriety on the adjudication process that we get on the front end.”

Last year, the North Carolina based classic car repair shop and dealer was accused of exploiting, overcharging, and attempting to repossess vehicles when customers could not or refused to pay the total of their invoices.

According to an investigation by WRAL, after having her dealership’s license revoked, Owner, Vivian Pompliano is facing one count of obtaining property by false pretense and four counts of exploitation of the elderly or disabled.

Allen Thompson, a citizen of South Hill, spoke in favor of Pomp Boys saying that Tony was a fine upstanding guy and that the business will be a “huge tourist attraction”.

“As far as all of this negative stuff going on, I’ve heard the most insane rumors and gossip about Pomp Boys that is just ridiculous. Things you can hardly think about making up. I would say take it with a grain of salt.”

He also praised the work done on the building since it was purchased by Pomp Boys Motors.

Shane Grisham, an employee for the company, said that he was given a great opportunity to work with them. “I’ve seen the work that they’ve done to the building and I’ve been part of that. I’ve seen pictures and heard a little bit of the history of that building and it’s pretty neat to be apart of keeping that building alive.”

“I look forward to the future with Pomp Boys. I think they've got a good product and a good business and I’m proud to be a part of it.”

Doug Fachinna said he had a “nightmare experience” dealing with the company. He encouraged Council to go online and research the many complaints against the company. He claimed the Roanoke Rapids location had been closed for business according to the report by WRAL.

“I’m glad their employees like them. Most employees like who they’re working for as long as you’re paying them but as far as what’s going to come to this town is a lot of upset people and a stain on this town.”

“Like [Pompliano] said, in business you’re going to have one or two people who are not satisfied but when you get up in the numbers of 30, 40, 50 people, there might be a problem. That’s probably why they closed up shop there and came here.”

South Hill resident Bernard Oakley, Jr. said that after researching online he found out that the owner had been arrested in Roanoke Rapids not once, but twice for “elderly abuse”.

“It affects me because I’m old. Who typically has cars that would need to be restored? Those obviously born in the 40’s and 50’s who rode these cars and purchased these cars.”

Oakley asked if Council wanted to tie the local police department up investigating numerous complaints of elderly abuse and other issues.

“I understand that you can put stipulations on exemptions. I would encourage you to consider that. Consider what has gone on and, if necessary, postpone for at least a month. Give our police chief and investigators a chance to look into these things and do what’s in the best interest of South Hill.”

Jason Wright, the owner of Red Rabbitt Coffee in Roanoke Rapids, NC, warned the Council not deal with Pomp Boys. He claimed that he was in the process of trying to find a vehicle for a woman in Florida that was left in the care of Pomp Boys over two years ago.

He said that he could list 21 more names of people who have been abused and mistreated by the company.

“I’m a business owner in Roanoke Rapids. I drove up here on my own to tell you to not do business with people who will bring harm to your community. Save yourselves. Save yourselves the pain and the anguish of having to explain to people that you don’t know how someone like this was let into this community. My town did not get this opportunity.

Lastly, Council heard from Vivian Pompliano who first thanked the town for the work done to the sidewalks around the building. She continued by pointing out that Pomp Boys offers 10% off to Law Enforcement officers.

“Last year we gave what I believe was the largest donation to the Roanoke Rapids Police Department. I know that that might seem funny but it was even after they had been harassing me for a couple of years. It doesn’t change who you are inside just because someone does malice to you.”

She said that she had been instructed by her legal counsel not to go into a lot of details but said that it was “a lot of huff and a lot of fluff” but the company would get through it.

“We have dozens and dozens of happy customers. A lot of South Hill customers come and shop at my store. On a daily basis they have been coming into the shop here showing their support and how excited they are for us coming. We’ve been here almost two years working on the building. We’ve put a tremendous amount of money into it than we ever anticipated putting in. We’re very proud of it and consider ourselves the caretakers of the building. We understand that it’s historically significant and we hope we’re making you proud with what we’ve done to it.”

She encouraged Council to look at the company’s history of community service and community outreach programs.

Mike Moody made a motion to defer any action on the matter to a future meeting. The motion passed unanimously.