Members and guests of the Brunswick Republican Committee gather around Senator Ruff and Delegate Kirk Cox. 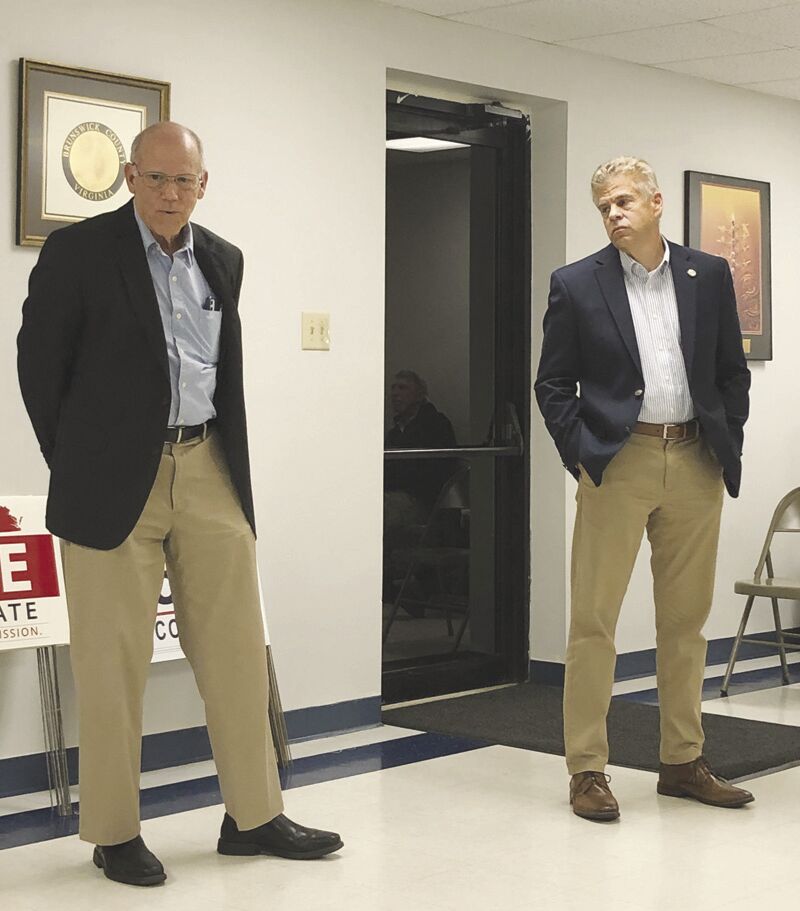 Members and guests of the Brunswick Republican Committee gather around Senator Ruff and Delegate Kirk Cox.

Long-time Senator, Frank Ruff, took time on his birthday to speak to the Republican Committee about the recent Special Session of the General Assembly. “I want you to visualize a movie or a TV show where there is a car wreck and the car goes off the bridge and then in slow motion it starts to come down. You know that it is going to be a disaster when it hits the bottom. That’s what we’re doing in Richmond. For five weeks now we’ve just been moseying around, not accomplishing much.” Ruff added that Republican Senators did not want to accomplish much because the Democrats are trying to accomplish a lot of “bad things”.

Senator Ruff spoke on the shortage of Virginia State Troopers due to the new law enforcement legislature that Democrats are trying to pass, most notably the attempt to minimize the charge for assaulting a police officer from a felony to a misdemeanor. “We are losing them twice as fast as we can put a class of 75 together,” claimed Ruff. The House of Delegates recently passed a civil immunity legislation, which allows for civil lawsuits to be brought against an individual police officer. “Now if you’ve got some assets like a house or a savings account, would you really want to risk that?”

Governor Ralph Northam called the General Assembly back into session because the budget did not meet the points that it met on June 30. “He delayed that as long as he thought he could get away with it. We didn’t know what he was up to but then when we got to Richmond we found out that the big reason that he called us in when he did was that [the Governor] wanted to change more voter laws. The most important thing for the Democrats was to change the law and we did it right before the door closed.” Senator Ruff also said that the Democrats “did away with every single [voter] protection that we had built into the system.”

“We’ve got problems and they’re going to get worse. We dealt with guns to some degree last year and we will deal with more gun issues in January. The only way that the Democrats are going to listen is if we do extremely well with President Trump this year. If he does good in Virginia then that will back them off, that will make them think before they do anything.” Senator Ruff finished by saying that he hopes that not only will the community get out and vote, but that citizens will stay involved.

Before introducing Delegate Cox, Brunswick Republican Committee President, Eric Brazeal, told a story about meeting Mr. Cox’ son, Cameron six years ago. “I was inspired by Cameron and how he kept talking about his dad.” After listening to Cameron’s stories about his dad being very involved in his life, Brazeal could tell that his dad meant something to him and that he himself would have to meet this man, not knowing what he did for a living. “I could tell that this kid loved his father. Sometimes the state doesn’t need a politician, it needs a father.”

Former Speaker of the House and possible future Governor of Virginia, Kirk Cox, called the introduction the best he had ever heard. Cox is the father of four sons, baseball coach, and a retired schoolteacher.

The House of Delegates attended a virtual special session and according to Cox, they are just “not meant to do that” and the “Democrats did that somewhat on purpose”.  So what is so bad about a virtual session? Cox says, “There are several things. You are always having Delegates drop off and you have to remember that we represent about 80 to 85,000 people, so if you can not vote, you can not represent your constituents. The Democratic reaction to that is ‘oh we had enough votes so your vote doesn’t matter.”

“If you go to your Capitol right now, you would be sickened. Your actual Capitol is closed. It’s literally boarded up. If you go to the Bank Street entrance and walk, there is plywood all over. So when you talk about Capitol Police and what’s going on right now in Richmond, it breaks your heart,” said Cox. The Delegate says that he requested permission to enter the Capitol recently and was denied.

“This is the thing that hurt me more than anything. We were in special session that first day and Democrats know we are going to go virtual and they paid themselves a $210 per diem.” The House has been in session since August 18, meaning that there has allegedly been $3,000 in per diem collected by Democrats to “basically sit on their couch”.

Mr. Cox agreed with Senator Ruff in saying that the special session was supposed to be to discuss the budget but that the House “hasn’t done anything with the budget”. He then added that they had discussed one or two things, included a 25% cut to Virginia State Police funding. “If you think about it, if you cut state police funding by 25%, with 200 current vacancies, that would devastate us,” said Cox.

Delegate Cox spoke on Former Governor, George Allen’s view on what was going on in the 1980’s, which was a time of violent crimes in Richmond. “In those days if someone was committing murder or rape, they were serving about one third of their sentence.” He continued, “The Democrats are rolling all of that back. What’s disturbing is that a lot of that is for violent felons. So if you’re a murderer, a rapist, a kidnapper, or a child pornographer, you could serve as little as 54% of your sentence under this new bill. They got some pressure and they finally amended the bill when it came over to pull out some of the worst categories but still in that bill is child pornographers, people that burn crosses, etc. There are some pretty bad categories in there.”

Mr. Cox finished by saying, “I think the Governor has shown less leadership during this pandemic than probably we have ever seen. If you look we are bottom five in testing, we have had the nursing home debacles, our schools are not open and they have had no guidance what so ever. They let one person out of prison without properly notifying the victims family, which is required by law.” He pointed out that just eight months ago Virginia was the number one state to do business, cutting taxes by a billion dollar and blocking $2 million worth of tax increases. If Virginia does not reverse to Republican in 2021, we are in serious trouble.”

Mr. Mike Hankins, Chairman of the Lunenburg Republican Committee and Board of Supervisors member, offered a detailed look at this year’s voting options. “We’ve got a lot of new laws on how elections are handled this year. We have the mail in ballots, which is kind of a bad idea for most people. I encourage you to avoid voting through the mail because the chance of voter fraud is raised with the mail in ballots. With that being said, I would encourage everyone in this room to go vote early. As of last Friday, you can go to the registrar’s office and vote. You vote on a machine, just like you would on Election Day. It’s safe and it’s secure.”

House of Delegate’s hopeful, Kimberly Lowe, spoke to the group about her plans if elected and discussed some of the issues that she believes the 75th District is facing. “The reality is our freedoms and our liberties are at stake right now and this is the first step in making sure that we take back Virginia.” Candidate Lowe decided in 2017 to run for office and has been “running” ever since. “I’ve been on the ground, I’ve been trying to get people involved all across the area.” She continued, “I’ve been solving problems long the way. I was able to get funding for disabled students in our area. I was able to get one of the first COVID-19 mobile clinics up and running because the big health conglomerates were not willing to spend the money needed to help the citizens in this community because sadly it’s the dollar that’s more important to them.” Lowe says that the Southside area has been ignored for 16 years and “it is time to come together for our communities.”

Otto Wachsmann, a Sussex County native who is also running for a seat in the House of Delegates representing the 75th District, says that his research shows that the 75th District has not “gone Republican in the House of Delegates since the 1800’s”.  Mr. Wachsmann believes that rural areas within Virginia have been left behind. “The people in Richmond seem to have forgotten us, so I started focusing on what I could do to help change that.” While studying to be a Pharmacist in 1987, Wachsmann served as a Legislative Aid to Delegate Harvey Morgan and learned a lot watching his father act as Mayor of Stoney Creek for 30 years. Wachsmann says that he has been on the forefront of fighting the insurance companies. “The insurance companies upset patients with all of their rules and regulations and it’s the providers that are really putting us (small businesses) out of business.”

Zone 3 Chairman, Rick Buchanon, let everyone know about an upcoming fundraiser for Bob Good at 6:30 p.m. on October 2 at the Clarksville Community Center. “I don’t know what you guys know about the money situation in the campaign for Congress but there are boatloads of money being flown in from out of state for Cameron Webb. Most of his donations are from out of state so anything that you can do to help Bob Good with a donation would be greatly appreciated,” said Buchanon.

Wally Sayko, Republican Representative for the County Board of Elections, spoke on the biggest changes in the voting process. Mr. Sayko says that the change in photo identification requirements to vote is “probably the worst thing to ever happened to voter integrity or elections”.  He continued, “You can walk in and say ‘I’m so and so from 123 ABC Street’ and they can show a phone bill or anything with the resident information on it and we have to accept that.”