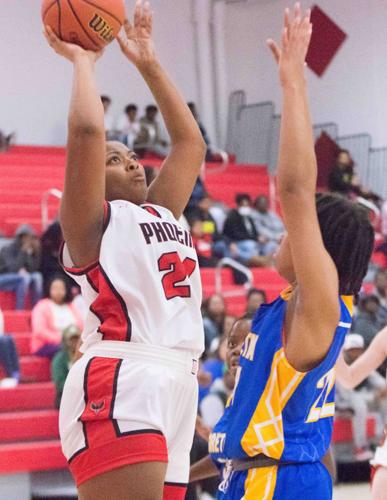 Daniya White hit a short jumper on this play for Mecklenburg County HS in action from the Lady Phoenix heartbreaking 64-60 loss to Gretna HS on Thursday evening in Baskerville. (Dennis Smith) 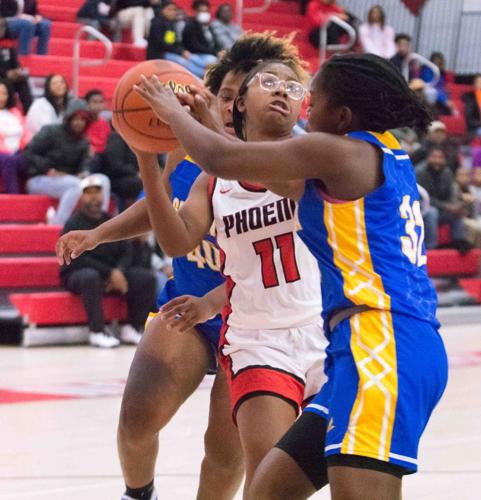 Daniya White hit a short jumper on this play for Mecklenburg County HS in action from the Lady Phoenix heartbreaking 64-60 loss to Gretna HS on Thursday evening in Baskerville. (Dennis Smith)

With the score tied at 45 going to the final quarter, the Mecklenburg County High School varsity girls’ basketball team turned up the heat, opening the fourth quarter on a 15-0 run to take a 60-45 lead at the 4:03 mark. The contest was not over however as Gretna responded with a 19-0 run to end the game and spoil the Lady Phoenix home opener by claiming a 64-60 victory.

It was a heartbreaker for Mecklenburg who fell to 0-3 on the season after Saturday’s 67-10 loss to Lafayette HS in the Maze Toomer Lady Cougar Classic at Surry HS.

With the game against Gretna tied at 60 with 1:19 left to play, the Lady Phoenix turned the ball over with 42 seconds left.

Gretna was able to score with 21 seconds left when Slim Miller hit a runner for a 62-60 lead. Mecklenburg had trouble inbounding the ball and turned it over with 14 seconds left and the Lady Hawks inbounded the ball with a long pass to a breaking Miller who scored on a layup with seconds left to seal the 64-60 victory.

It was a back and forth affair as Gretna opened the game with a 17-11 lead in the first quarter and took a 35-31 lead to the halftime break.

Mecklenburg heated up in the third quarter as Jordyn Maclin scored on a driving layup and Yvonne Dixon buried a trey to give the Lady Phoenix a 36-35 lead at the 7:05 mark.

A 6-0 run midway through the stanza gave the Lady Hawks a 45-41 lead but Maclin and Trinity Pamplin scored over the final minute to tie the score at 45.

Maclin hit a trey and scored five points early in the fourth quarter for Mecklenburg while Daniya White added four points as part of the 15-0 run before Gretna responded with the final run down the stretch to steal the victory.