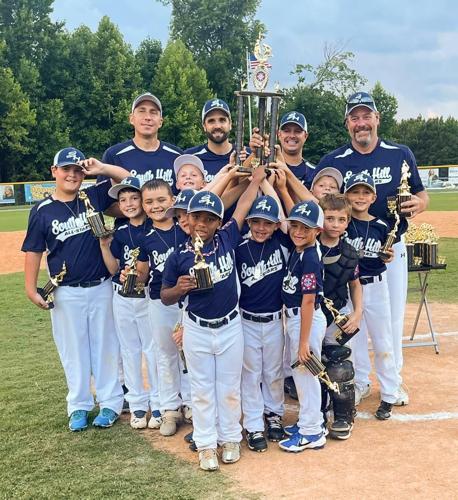 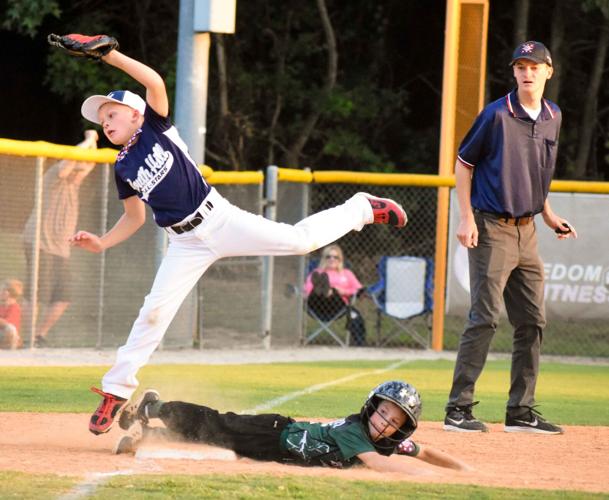 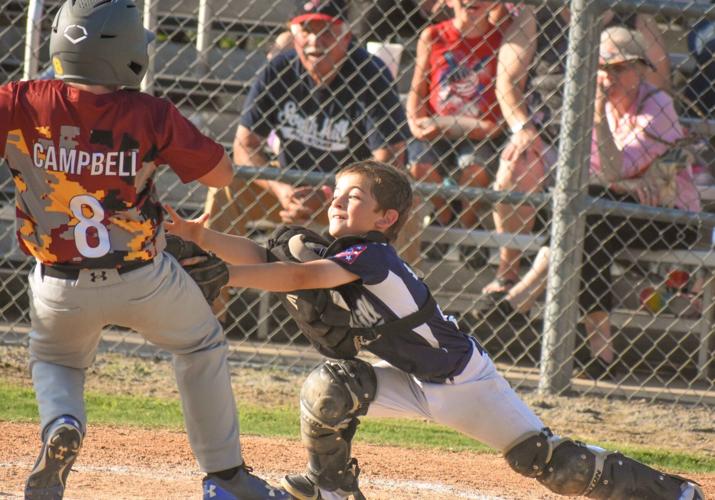 South Hill catcher Zach Bevell made a great tag to get a Timberlake baserunner out at the plate in action from the Virginia Dixie Youth Coach Pitch D2 state tournament at Parker Park. (Dennis Smith)

South Hill catcher Zach Bevell made a great tag to get a Timberlake baserunner out at the plate in action from the Virginia Dixie Youth Coach Pitch D2 state tournament at Parker Park. (Dennis Smith)

The South Hill All-Stars overcame an opening round loss to fight back through the loser’s bracket and advance to the winner-take-all title game before falling 14-4 to Buckingham on Friday night in the Virginia Dixie Youth Coach Pitch D2 state tournament at Parker Park.

South Hill went 4-2 in the tournament with both losses coming against Buckingham but the local team also handed the state champions their only loss.

After being soundly defeated by South Hill on Thursday night, Buckingham came out focused on Friday, holding the host team scoreless in the first inning before scoring five runs in the bottom of the inning to take a 5-0 lead.

Buckingham held South Hill scoreless again in the second and third innings before adding two more runs in the third inning to increase its lead to 7-0.

South Hill got on the scoreboard in the fourth inning when Wesley Jones singled and scored on a RBI single by Carter Lafoon.

South Hill added three runs in the top of the fifth when Mason Garnett, Taylor Smith and Reed Crisman all reached on base hits and scored.

Buckingham put the game away with seven runs in the bottom of the inning to seal the victory.

South Hill played its best game of the tournament in handing Buckingham its only defeat in a 16-5 victory on Thursday evening.

After falling behind 3-1 in the second inning, South Hill exploded for six runs in the third inning and added four runs in the fifth and two in the sixth.

Buckingham scored two runs in the first inning and one in the second, third and fourth innings.

The local team advanced to the title round with a 14-8 win over Timberlake in an elimination game last Tuesday evening.

Hren got the local team off to a good start by leading off with a hit and scoring for an early 1-0 lead.

Timberlake scored four runs in the second inning to grab the lead but South Hill answered with two in the bottom of the inning when T. Smith and Crisman scored to trim the deficit to 4-3.

B. Smith scored for South Hill in the third inning to knot the score before Timberlake added two in the top of the fourth.

South Hill exploded for five runs in the bottom of the inning when Crisman, Hren, Jones, B. Smith, Matthew Boyd and Lafoon all scored.

Crisman, Zack Bevel, Hren, Jones and Smith all scored in the fifth inning to open up some breathing room.

Hren, B. Smith and Crisman led South Hill with three runs apiece in the victory.