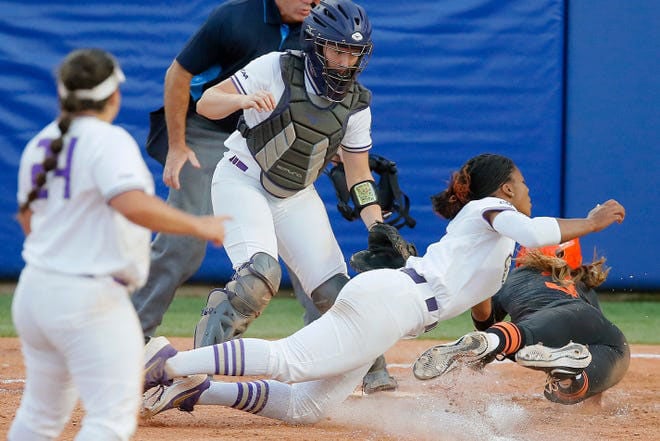 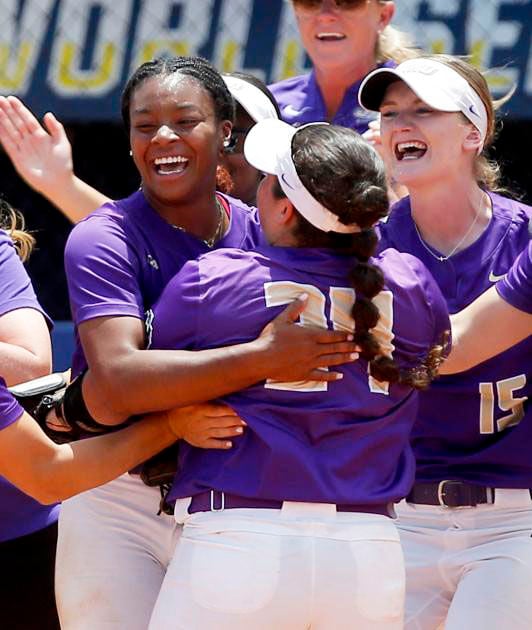 Former Park View HS standout Odicci Alexander is mobbed by her teammates following the final out of James Madison University’s 5-4 win over No. 1 Oklahoma on Thursday afternoon in the opening game of the NCAA Women’s College World Series in Oklahoma City, Oklahoma. ESPN said it was the biggest upset in college softball in the past 30 years. (Associated Press) 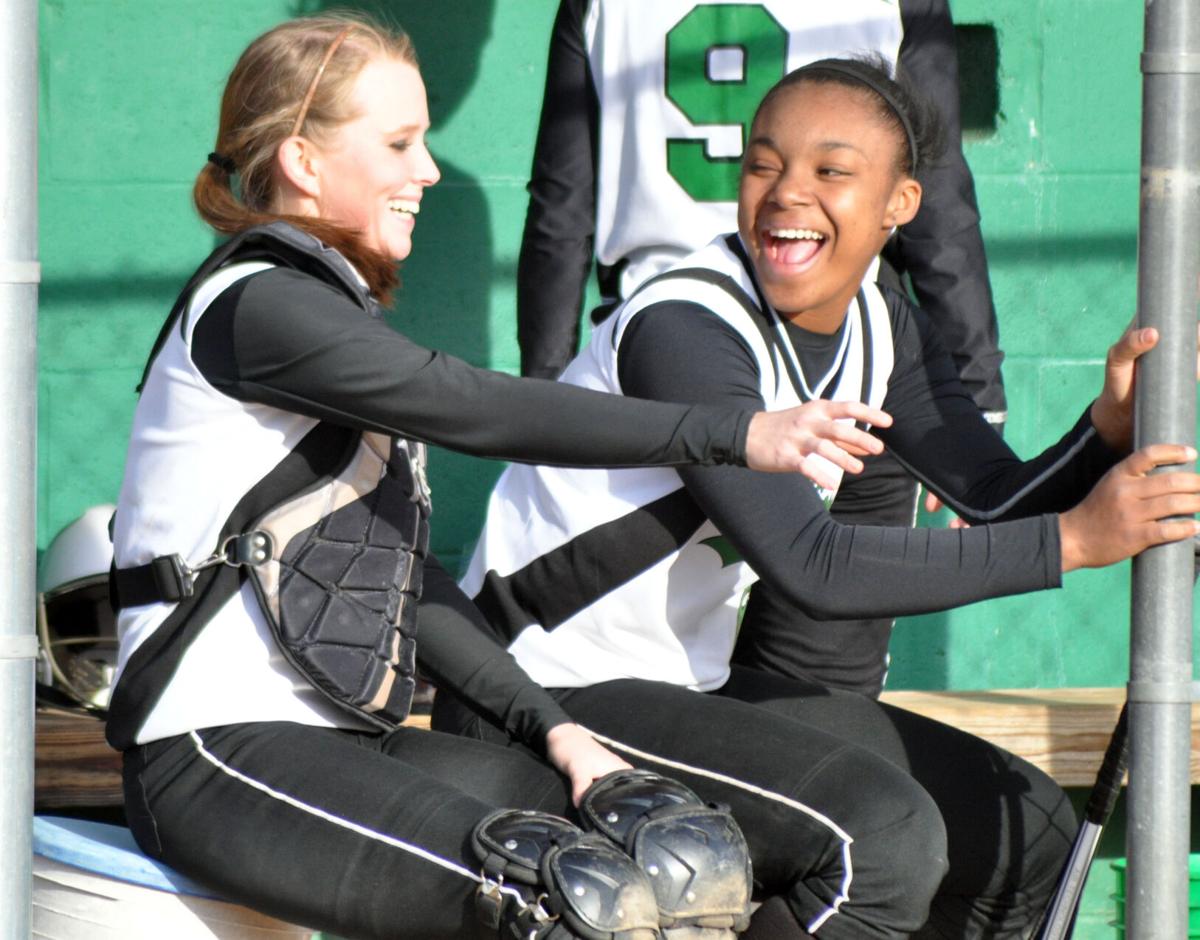 Odicci Alexander, pictured talking with catcher Jessica Gordon during a break in action while playing at Park View High School, brought lots of smiles to Southside, Virginia and the nation with her outstanding play for James Madison University this past week in the NCAA Women’s College World Series. (Dennis Smith)

Former Park View HS standout Odicci Alexander is mobbed by her teammates following the final out of James Madison University’s 5-4 win over No. 1 Oklahoma on Thursday afternoon in the opening game of the NCAA Women’s College World Series in Oklahoma City, Oklahoma. ESPN said it was the biggest upset in college softball in the past 30 years. (Associated Press)

Odicci Alexander, pictured talking with catcher Jessica Gordon during a break in action while playing at Park View High School, brought lots of smiles to Southside, Virginia and the nation with her outstanding play for James Madison University this past week in the NCAA Women’s College World Series. (Dennis Smith)

Former Park View High School standout and Palmer Springs native Odicci Alexander instantly became one of the most recognized college athletes in the country after her outstanding play over the past week for James Madison University in the NCAA Women’s College World Series in Oklahoma City, Oklahoma.

Alexander did what many experts said was impossible in leading unseeded JMU to a 5-4 win over No. 1 seeded Oklahoma in the tournament opener on Thursday afternoon and then coming back with another complete game win and the play of the tournament on a diving tag of a baserunner trying to score on a squeeze play in the seventh inning to preserve JMU’s 2-1 victory over No. 5 Oklahoma State on Friday night.

The Lady Dukes became the first unseeded team to advance to the national semifinals at the World Series and Alexander became the darling of college softball with her sensational play.

Unfortunately for Alexander and JMU, the dream of a World Series title came to an end on Monday when top-seeded Oklahoma roared back through the loser’s bracket to top the Lady Dukes and earn a date in the championship series.

Just like in the opening game between the two teams on Thursday, the game on Sunday was tied 3-3 going into the seventh inning but this time Oklahoma took advantage of some key hits: a bunt single, a double and a two-run homer by Kinzie Hansen to seal a 6-3 win.

Alexander took the loss in the circle against OU on Sunday. She pitched all seven innings and allowed six earned runs while striking out four and walking three.

“It wasn’t easy, don’t get me wrong,” Gasso said. “She still had a lot of our numbers. But I just felt like we felt more confident, a little more prepared with what we needed to do to get to the ball quicker than what we were doing yesterday.”

JMU outhit the Lady Sooners, 8-7, but they left at least one runner on base in five of the seven innings and stranded two in each of the first three innings.

On Monday in an elimination game, Oklahoma topped the Lady Dukes 7-1 to earn their date in the title series.

JMU got off to a great start as Kate Gordon led off the game with a deep homerun and a 1-0 lead. That was all the scoring JMU could muster however as Lady Sooners pitcher Giselle Juarez struck out 11 and allowed only four hits in the complete game victory.

Alexander held Oklahoma scoreless for three innings before giving up two runs in the fourth and four in the fifth when she was relieved by Alissa Humphrey.

She left the field to a standing ovation from the large crowd at the game and the admiration and respect of many across the country who watched her play.

Alexander brought excitement and pride to many from across Southside, Virginia that watched her grow up and hone her craft playing in the South Hill Dixie Softball League and for Park View High School.

An All-State player for the Lady Dragons, Alexander led Park View to the state tournament for the first time in school history in 2014 and again in 2016. She also led South Hill to its first Dixie Softball World Series title in 2011.

Alexander was simply superb in the win over No. 1 Oklahoma on Thursday in the tournament opener, going the distance in the circle and holding the nation’s best offensive team to a season-low three runs while recording nine strikeouts.

The Lady Sooners came into the game averaging nearly 12 runs per game.

The victory was the first for an unseeded team over a top seed since Louisiana did it in 2008.

Alexander recorded her 700th career strikeout in the history-making win which moved her to third in JMU program history.

She also learned two days before the series started that she had been selected as a 2021 Second Team NFCA All-American.

Alexander said following the game that she was just trying to mix her pitches against a talented offense.

“Just mixing up my pitches, not really throwing the ball at the same spot each time, and just making sure it moves,” she said. “Because they are great hitters.”

Alexander was equally impressive in going the distance in the circle on Friday to earn a 2-1 win over No. 5 Oklahoma State. She struck out two and scattered three hits with two walks.

Her diving tag of Scotland David trying to score from third base on a squeeze with one out in the seventh inning was selected as the No. 1 play on Sportscenter’s Top 10 Plays of the Day on Friday.

"It was a tough situation," Alexander said. "Runners were at second and third, and I kind of knew they were going to do something like that, so just being focused, and I mean, I kind of saw her in my peripheral and I really didn't have time to flip it to Lauren (Bernett), so I just went for it."

She earned accolades from across the country on social media about what many have called the play of the year in college softball.

Ron Rivera, the head coach of the Washington Football team tweeted, “You aren’t crashing the party, you are the party!”

Former USA Olympic pitcher Jenni French wrote, “I love her! On a mission!”

NCAA Softball tweeted out after the play, “Odicci Alexander, Are you serious?”

“That’s probably the best play I’ve ever seen in my career by a pitcher in that situation with that much pressure,” she said after the game.

Alexander got a pop out for the final out of the game to seal JMU’s second stunner in the World Series.

“Her mentality and her growth and her maturity is what’s getting it done,” Coach LaPorte said after the win over Oklahoma State. “She’s always had the physical part of things, but where her mindset is right now — it’s unbelievable”

Alexander said after the win that the experience was incredible.

“It’s amazing,” she said of the first two wins. “I would have never thought. Honestly, I have no words. Most of this is like unreal. It still hasn’t really hit me yet that we’re actually here and we actually beat two of the top teams.”

A Role Model for Many

Many national college softball followers have lauded Alexander for her passion, her determination, her grit, and her heart for giving her all on every play.

She has become a role model for many young softball players across the country.

Odicci’s cousin, Joyce Holmes, told ESPN reporter Andrea Adelson, “I feel like she represents every little girl that's from a small town, that if you work hard, and you have a dream, you can do it. Don't let anybody tell you what you can't do. Because now she's sitting on ESPN, on the big screen, being a role model to people that look like her."

Alexander told ESPN reporter Jalyn Johnson that she realized she was on a big platform especially as the only black starting pitcher in the College World Series and she wanted young girls to know they can achieve their dreams.

“No matter your race, your height, your size, you can do whatever you want to do,” she said.