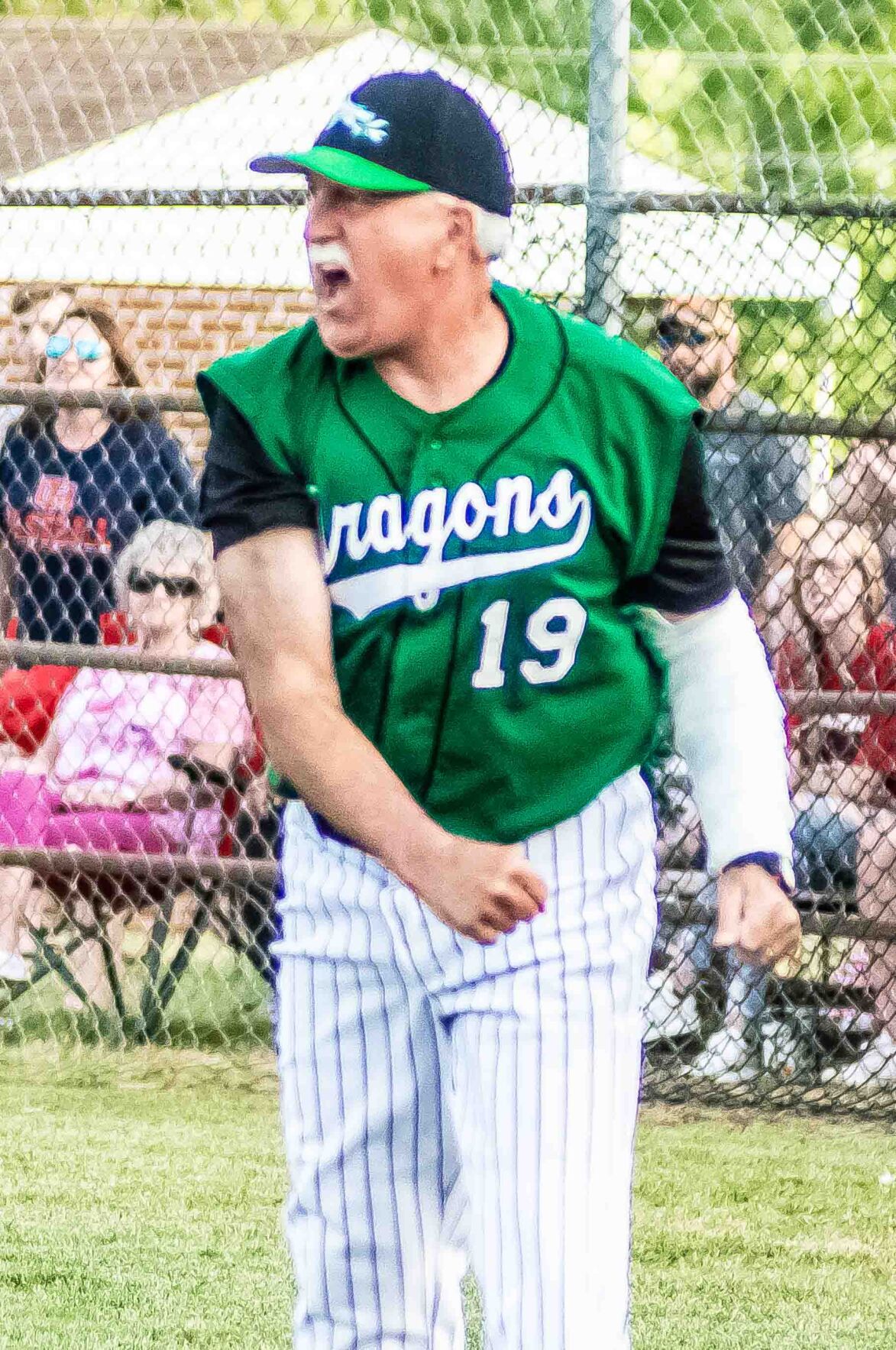 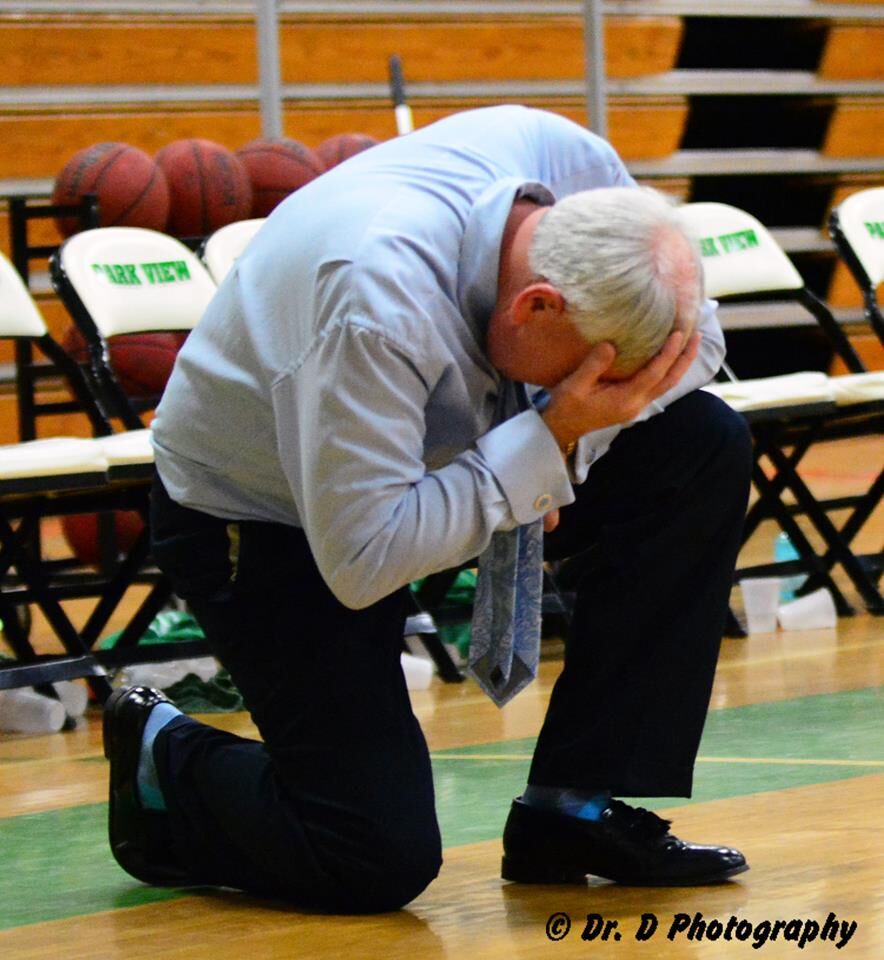 Park View High School girls’ basketball coach Mike Barmoy dropped to his knees for a moment of reflection following the Lady Dragons’ 62-52 overtime win over Petersburg HS in a regional semifinal contest in 2019. The victory earned the Lady Dragons their first state berth since 1991. (Dennis Smith)

Park View High School girls’ basketball coach Mike Barmoy dropped to his knees for a moment of reflection following the Lady Dragons’ 62-52 overtime win over Petersburg HS in a regional semifinal contest in 2019. The victory earned the Lady Dragons their first state berth since 1991. (Dennis Smith)

(With Park View High School slated to merge with Bluestone HS to form the new Mecklenburg County HS in 2022, the South Hill Enterprise is running an ongoing series that looks back at some of the outstanding athletes and coaches and their stories through the years. This is story No. 67 in the series.)

The Park View baseball team earned a program best 22 wins that season while the girls basketball team did the same with 19 wins.

“That’s probably the best year as a coach I have ever had,” said Barmoy, who started his career in 1983 when he was a junior in college and led the Fort Hill HS JV girls’ team in Cumberland, Maryland to a 9-1 record.

“I had a great mentor in John Armstrong who gave me a chance,” he said.

Barmoy went on to teach and coach at Amelia Academy following his college graduation and led the Lady Patriots softball team to a 20-7 mark during the 1988 season which set a program record. He took his next job at Brunswick High School where he learned from veteran coaches Jerry Burke and Freddie Reekes.

Barmoy came to Park View five years ago and he said he continued learning from outstanding mentors like Michael Greene.

“I have been blessed with some great mentors,” he said. “I have taken something from each one of them.”

Barmoy said that while winning has always been important, helping young people to grow and develop and be productive citizens after school has been even more important.

“I still have the fire to win,” he said, “but developing these kids to be productive in life is what is most important.”

Barmoy served as the head coach of the 2019 Dragons’ baseball team that went 22-3 and earned a state tournament bid for the first time in 48 years.

The Dragons finished as the Class 3, Region A runner-up after beating Lakeland and Colonials Heights in the first two rounds of the playoffs before falling to a strong Tabb HS team in the championship game.

As the Region A runner-up, Park View traveled to play Brentsville HS, the Region 3B champions, in a Class 3 state quarterfinal contest and gave them all they wanted before falling 5-4 in nine innings.

The Dragons led 4-3 going into the bottom of the seventh and were one strike away from victory when Jake DeLisi rapped out an infield single to knot the score at four. The home team went on to score the game winning run in the bottom of the ninth.

“They have nothing to hang their heads about,” Barmoy said of his players after the state tournament game. “It was a great season. They were hurt after the game. But if you care, it is supposed to hurt.”

Park View went undefeated in Tri-Rivers District play and 18-1 during the regular season and beat Southampton HS 2-1 in the district tournament championship game.

“We had some talent and they played well together,” Barmoy said. “It was also special for me to be able to coach my son especially on such a good team.”

The 2018-19 Park View High School varsity girls’ basketball made school history by winning 19 games, the most in program history.

The biggest win of the season for Park View came when they overwhelmed third-seeded Petersburg HS in overtime to earn a 62-52 victory in a regional semifinal contest and earn the first state tournament berth for the Lady Dragons since 1991.

“Thank God we came out and played hard,” Coach Barmoy said after the victory. “We were down seven in the fourth quarter but we kept fighting. We played really well in overtime.”

The Lady Dragons were led by Nieya Hawkins with 23 points in the victory while Mikya Harrison added 19.

Hawkins joined the Park View 1,000-point club that season while Harrison would join the elusive club the following season.

Park View would fall 74-37 to top-seeded Hopewell HS in the regional championship game before falling 56-31 to William Monroe HS which was led by Gatorade Virginia state player of the year Samantha Brunelle who signed with Notre Dame, in a state quarterfinal contest.

“We played hard and that was what we were looking to do,” Coach Barmoy said after the state quarterfinal game. “We had some turnovers and missed some shots but at least we gave them a good game. It was a great year for the kids.”

Park View finished the campaign with a 19-9 record.

“We struggled early that season but the girls came together,” Barmoy said. “They started playing for each other and good things started to happen.”