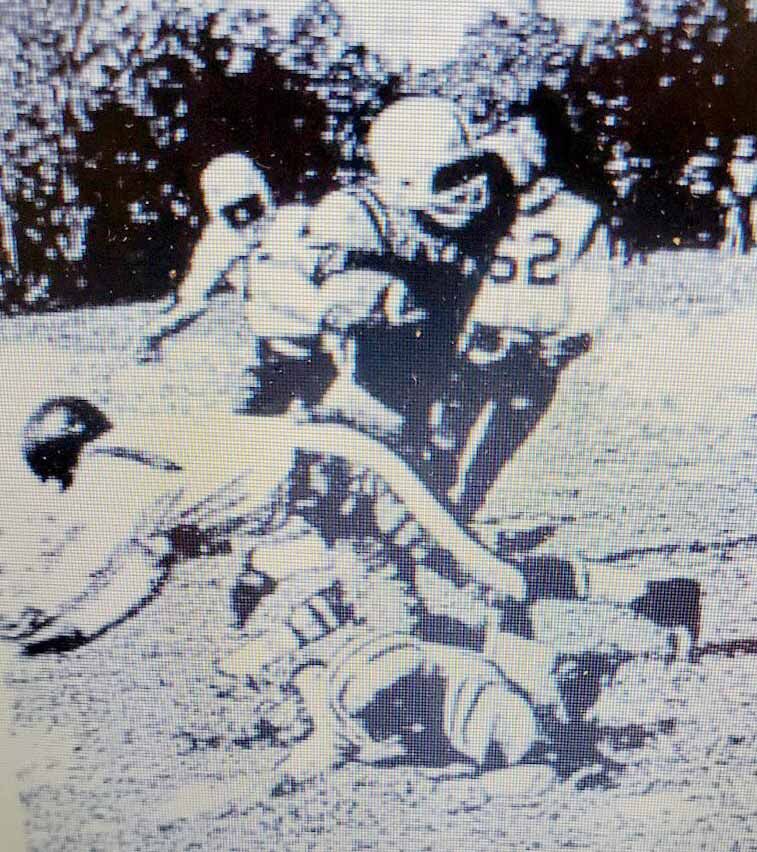 Wolfpack quarterback Henry Walker was one of the many standouts on the undefeated 1967 East End HS team. He passed for 17 touchdowns during the season and rushed for 12 touchdowns. “He was a gifted athlete in football as well as basketball and track,” said retired South Hill Enterprise Editor Frank Nanney, Jr., who covered local sports during the era. (Enterprise photo)

Wolfpack quarterback Henry Walker was one of the many standouts on the undefeated 1967 East End HS team. He passed for 17 touchdowns during the season and rushed for 12 touchdowns. “He was a gifted athlete in football as well as basketball and track,” said retired South Hill Enterprise Editor Frank Nanney, Jr., who covered local sports during the era. (Enterprise photo)

(With Park View High School slated to merge with Bluestone HS to form the new Mecklenburg County HS in 2022, the South Hill Enterprise is running an ongoing series that looks back at some of the outstanding athletes, teams and coaches and their stories through the years. This is story No. 29 in the series.)

The Wolfpack went 9-0 to capture the VIA Southern Division title and 10-0 overall and were declared state champions by VIA state officials after edging out Norcom of Portsmouth which had a 9-1-1 league record and Southside of Blairs which had an 8-1 mark.

East End fifth-year Coach J. E. Stuart and assistant Glover Powell welcomed 24 returnees for the historic season but the Wolfpack was still a young team with only eight seniors and seven juniors on the roster.

Many of the East End underclassmen would go on to play at Park View HS in 1969 when school integration was completed.

The Wolfpack coaching staff learned how talented of a team they had in the season opener in 1967 when East End topped Riverside HS 14-0 for the first victory over the visitors from Courtland in 12 years.

The talented Wolfpack defense did the rest, holding Riverside to negative 12 yards rushing on the night.

East End romped over Henderson Institute 38-7 in its first road game of the season behind Calvin Thompson who caught a 15-yard touchdown pass from Walker and also scored on a 1-yard run.

Walker completed 9 of 15 passes for 78 yards with three touchdowns and rushed for 53 yards with a touchdown. Larry Cook added 70 yards on 13 carries in the victory.

Kenneth Thompson had a fumble recovery for a touchdown in the game while Milton Crutchfield, Alvin Thomas, Jesse Jones, George Martin and William Gregory were cited for their outstanding defense in the win.

The Wolfpack topped undefeated Foster HS 42-0 in its third game of the season behind two touchdown runs apiece from Andrew Johnson and Walker. Johnson had an 82-yard kickoff return for a touchdown and added his second score on a 31-yard run. Walker scored on a 10-yard run and a 12-yard run.

Johnson led the team with 109 rushing yards on 14 carries.

East End improved to 4-0 in the first week of October with a hard-fought 18-7 win over Russell.

The Wolfpack jumped out to a 6-0 lead in the first quarter on an 8-yard touchdown run by Johnson.

Johnson scored his second touchdown early in the second quarter on a 40-yard gallop.

Russell answered with a touchdown on a 25-yard pass play to cut East End’s lead to 12-7 at the halftime break.

Johnson made it a hat trick in the final quarter, scoring his third touchdown on a 7-yard scoring run.

He finished with 145 yards on 15 carries in the victory.

The Wolfpack jumped out to a 34-0 lead in the first half and cruised to the lopsided victory in the second half.

In the game of the season, East End came from behind late in the fourth quarter with a 1-yard touchdown run by Johnson and a successful PAT by James Moore to top Wyatt 7-6 in a battle of unbeaten teams.

Johnson rushed for 73 yards on 23 carries in the win.

East End celebrated homecoming the following week with a 60-0 rout of Central as Alfreda Feggins was crowned Queen during halftime festivities.

Larry Cook had a big night for the Wolfpack rushing for 117 yards on nine carries with two touchdowns while also catching a 67-yard touchdown pass.

The Wolfpack topped Lunenburg 25-0 in its next game behind another great contest by the Wolfpack defense.

Walker scored two touchdowns for East End on runs of 36 and 14 yards while tossing two touchdown throws and completing 9 of 18 passes for 123 yards. Chavis and Thompson both caught touchdown passes in the game while Cook led the run game with 82 yards on 19 carries.

Thompson pulled in five grabs for 129 yards and scored three touchdowns while Johnson rushed for 84 yards on 12 carries and scored four touchdowns. One of his scores came on a 7-yard fumble recovery.

Walker completed 11 of 25 passes for 215 yards and three touchdowns while rushing for 45 yards on six carries with a touchdown. He also scored on a 51-yard interception return.

The squad finished the season off in style, capping off the undefeated campaign with a 47-0 win in its final game over Southside High School (Dinwiddie).

The local team racked up over 400 yards of offense in the game while holding Southside to only 70 yards.

Calvin Thompson caught three touchdown passes from Walker on throws of 9, 31 and 29 yards.