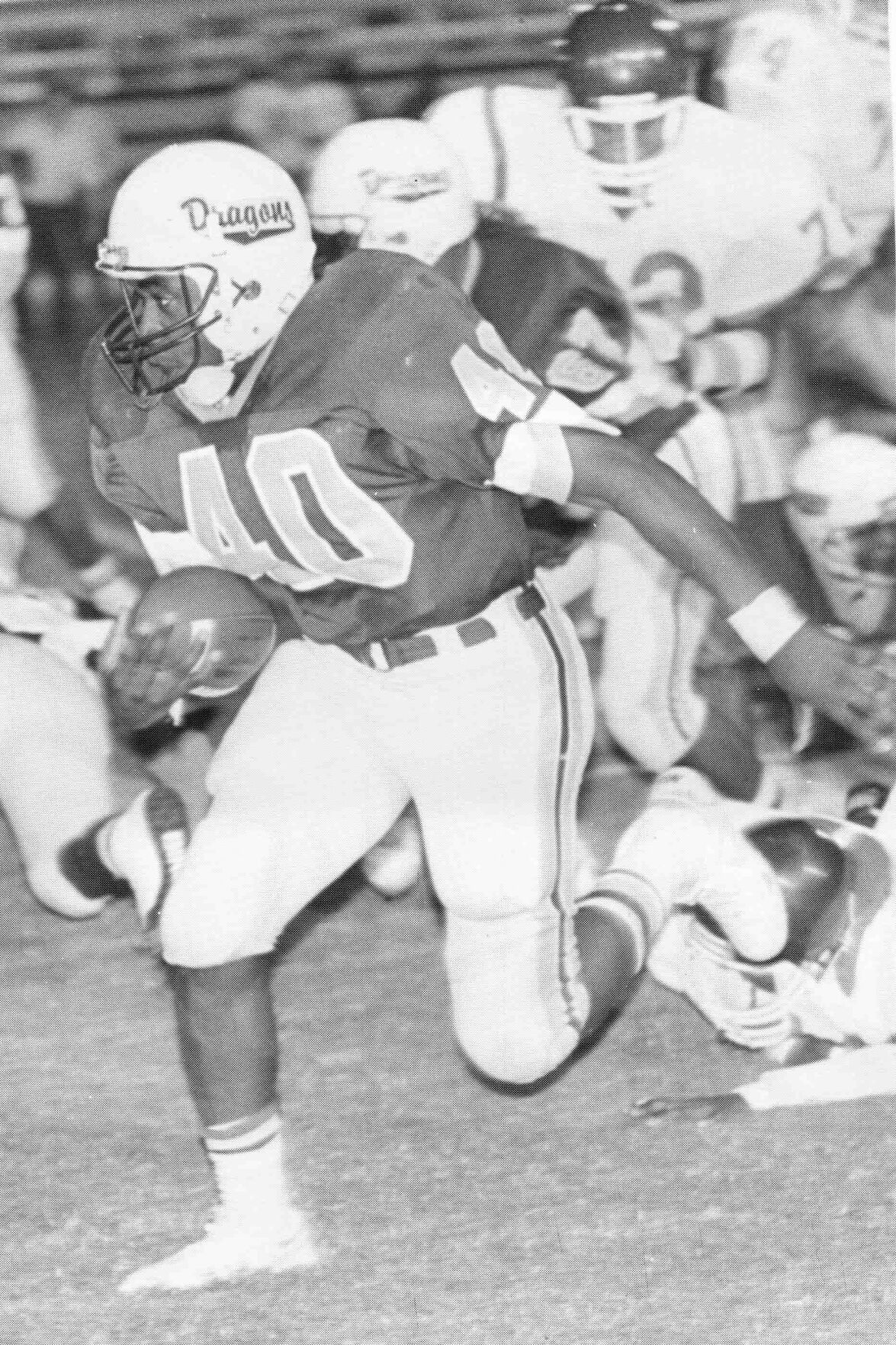 Chris Feggins was a talented football player that helped Park View qualify for the regional playoffs in 1990. He was the first player from the Dragons’ selected to play in the VHSL East-West Coach’s All-Star game. (Dennis Smith) 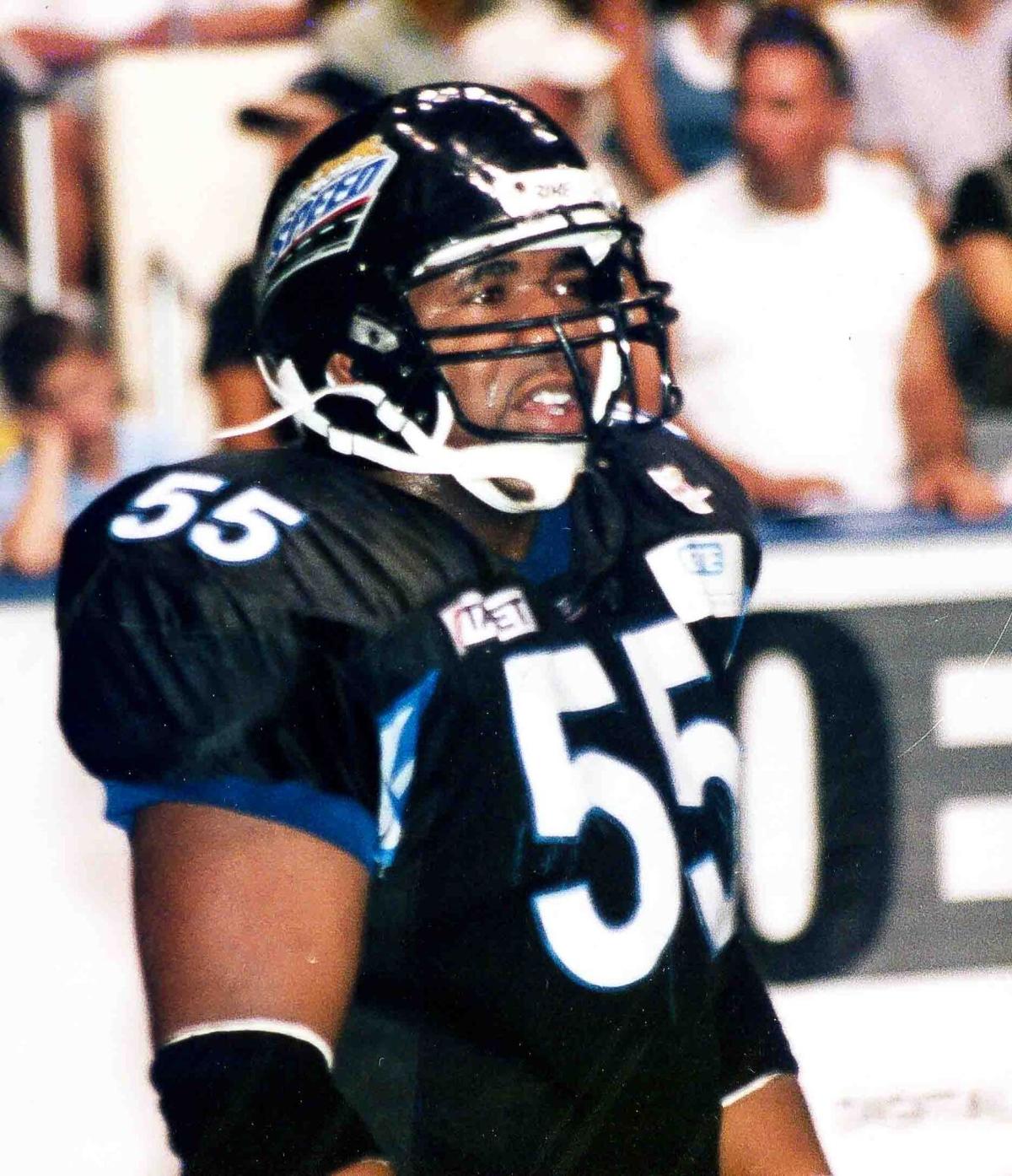 Chris Feggins was a talented football player that helped Park View qualify for the regional playoffs in 1990. He was the first player from the Dragons’ selected to play in the VHSL East-West Coach’s All-Star game. (Dennis Smith)

(With Park View High School slated to merge with Bluestone HS to form the new Mecklenburg County HS in 2022, the South Hill Enterprise is running an ongoing series that looks back at some of the outstanding athletes, teams and coaches and their stories through the years. This is story No. 43 in the series.)

Growing up, Chris Feggins had to be tough.

When you live in a household with outstanding athletes like brothers Howard and Eugene Feggins and sisters Tracey, Sherry and Angela Feggins, you have no other choice.

The two older Feggins boys were standouts for the Dragons’ football team. Howard went on to play at the University of North Carolina and in the NFL while Eugene played semipro football with the Richmond Renegades. Sisters Angela and Tracey were high-school standouts in basketball while Sherry was a speedster and a state participant in track.

“Growing up, I really didn’t know how good they were,” Chris Feggins said with a laugh recently. “I would just get on my bike and try to keep up with them. Sherry was an athlete too. I couldn’t beat her in a race until sixth grade. It was always a competition with all of us.”

The Feggins were also well known because their father Johnny Feggins was fixture at practices and games, usually offering encouragement and a positive word to the Park View athletes.

Growing up in such a talented household, Chris Feggins took the lead when it was his time, earning Southside District Offensive Player of the Year honors in football in his senior season of 1990 and leading Park View to an 8-3 mark and the first ever regional appearance for Coach Wade Crutchfield. Feggins became the first football player from Park View selected to play in the VHSL East-West Coach’s All-Star game.

It was a special season in 1990 as Park View topped both Powhatan and Matoaca in the same campaign.

Teammate Waverly Jackson was selected as the district’s Defensive POY that year while Ernest Jones and Terry Burnette joined Feggins and Jackson on the Southside District first team.

Feggins, a two-way and special teams’ standout, had a number of huge games in the backfield that season in earning All-Region and All-State honorable mention honors.

He rushed for 242 yards and three touchdowns on 19 carries in a big win over Prince Edward on homecoming night.

Feggins said his father always pushed him to be his best.

After the big homecoming win and on the ride home, Chris said his father said, “It looked like you really were not running that hard tonight,” he added with a laugh. “He was always pushing us to do our best.”

Feggins rushed for 93 yards on 13 carries in a hard-fought 21-6 loss to Southampton in the regional playoffs but went over the 1,000 yard rushing mark on the season, finishing with 1,053 yards and 13 touchdowns.

The appearance in the regional playoffs was the first for Park View since the talented 1982 team, led by his brothers Howard and Eugene, last qualified.

Feggins however did not earn a qualifying score on the SAT and went to Chowan University where he planned to play for two years and then transfer to a Division I program.

“My plans were to go to Chowan for two years and then transfer,” he said. “Mack Brown at UNC was really interested in me coming there when I transferred.”

Feggins ended up attending Chowan for a year and a half and set the freshman scoring record with five touchdowns in a game.

He said however that he did not do what he needed to do to stay in school.

After leaving college, Feggins moved to Cincinnati to live with his brother Howard who had developed contacts with a number of schools after playing in the NFL.

“I was working out and staying in shape,” he said. Feggins secured a workout with the Orlando Storm in the Arena League.

“I went down and made the squad,” he said. “But they ended up shutting down the team.”

Feggins said he returned back to South Hill and was having a conversation with former Park View standout Bill Wall one day at the South Hill Bus Station and Wall called and set up a meeting for him with the Washington Redskins.

Feggins had a great visit with Bobby Mitchell who was the general manager but was told they didn’t have room for another running back but he would put some feelers out for him.

Feggins ended up earning a workout with Dick Butkus’ program in the XFL and made the team but once again the franchise folded.

Feggins returned back home and played four seasons with the Richmond Speed in the AF2 League.

“I was decent but was playing out of position,” he said. “I enjoyed it but after I tore my knee up, I only played for one more year.”

Feggins worked as an assistant coach on the Meadowbrook High School football team for two years after that and has continued to mentor young athletes at his home in Chesterfield.

“I have my garage set up as a gym,” he said. “I have been doing that for the last six years. A lot of kids are not mentally tough. I am just trying to teach them about doing the right thing.”

Feggins, who was also a standout on the Park View basketball team, met his wife Yulonda while they were students at Southside Virginia Community College, where he played on the first SVCC basketball team. They have been married for 20 years.

Feggins is an ordained Minister who has also worked with VDOT for the past seven years.

He and his wife enjoy hosting children from the church to mentor and pastor to them on the weekends.

Feggins said looking back on his high-school career brings back lots of good memories.

“I remember Waverly and I riding our bikes to the old field house to lift weights,” he said. “I loved to exercise and Coach Crutchfield would always open the weight room for us. It was just a special time. I thank God for the opportunity I had to be out there.”