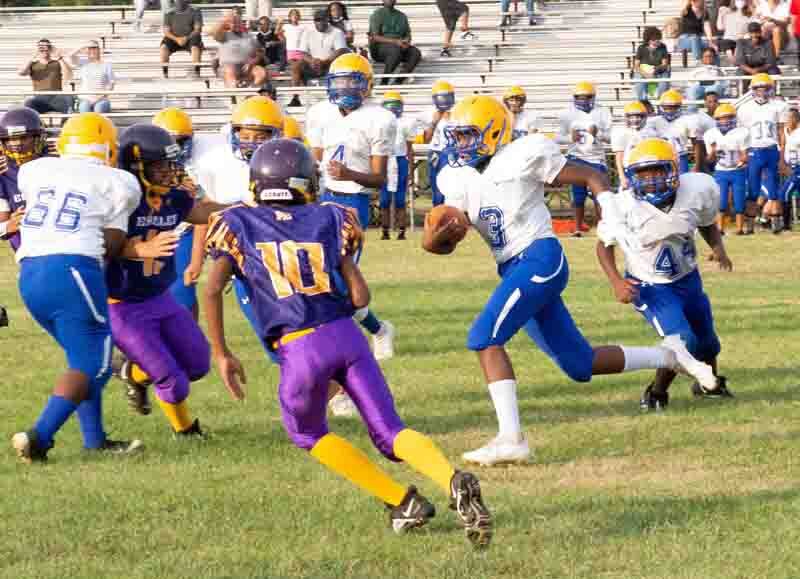 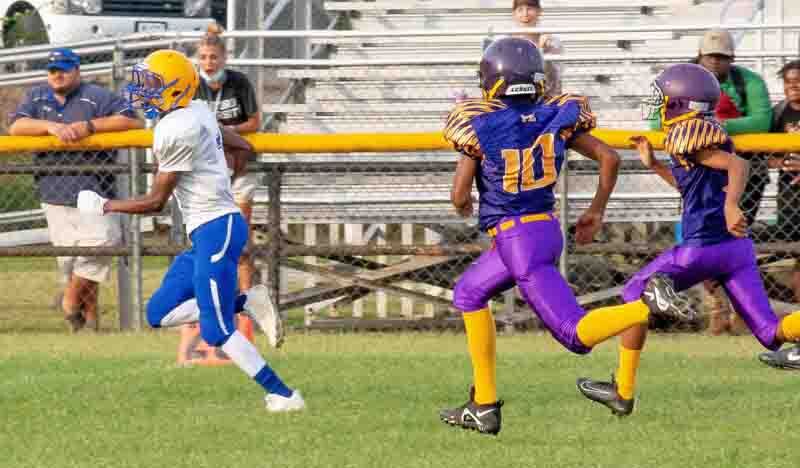 Shamareon Rainey pulls away for the first of his two touchdowns in action against Prince Edward County Middle School last Wednesday night at Dragon Field. The Park View Middle tailback rushed for 153 yards and two touchdowns on eight carries in the game. (Dennis Smith)

Shamareon Rainey pulls away for the first of his two touchdowns in action against Prince Edward County Middle School last Wednesday night at Dragon Field. The Park View Middle tailback rushed for 153 yards and two touchdowns on eight carries in the game. (Dennis Smith)

“Our kids just ran out of gas,” said PVM Coach Bruce Cliborne. “I thought we played well early against a bigger team but couldn’t keep key players on the field because of cramps and fatigue. Not having any scrimmages hurt us a lot as this was the first time we competed against anyone. No football for basically two years is showing up a little bit.”

The Cougars struck first when Shamareon Rainey, an explosive back, got the outside corner and rushed for a 47-yard touchdown to put PVM up 6-0 at the 6:58 mark of the opening quarter.

The visitors did not take long to answer as Julian Lawson, a quick tailback for the Eagles, answered with a 60-yard touchdown run to knot the score at six at the 6:37 mark.

Following a Prince Edward punt early in the second quarter, PVM drove from their 24-yard line inside of the Eagles 10-yard line behind good running from Rainey, I’szwohn Bragg and Nashawn Mickens. The drive broke down however and Prince Edward forced a fumble on fourth and 4 to take possession of the ball with 24 seconds left in the first half.

Lawson then broke a 78-yard run with no time left on the clock for a Prince Edward touchdown and then added a 2-point conversion run to give the Eagles a 14-12 halftime lead.

The Cougars defense came up with a big sack early in the third quarter when Bragg and Zhaeden Walker teamed together for a big play that went for a 25-yard loss.

After taking possession of the ball, PVM ran into trouble however after a bobbled snap and two penalties backed them up to their 13-yard line. The next handoff was fumbled and the Eagles recovered in the endzone for a touchdown to open up a 20-12 lead with 24 seconds left in the third quarter.

The Cougars answered quickly when Rainey broke a run to the outside following the ensuing kickoff and rushed for a 67-yard touchdown with no time left on the clock. PVM was unable to punch in the 2-point conversion however and trailed 20-18 going to the final stanza.

The Eagles put together a long offensive drive in the fourth quarter which ended when the quarterback scored on a 2-yard keeper with 3:07 left to play and Lawson added the 2-point conversion for a 28-18 lead.

The Cougars moved into the Eagles redzone on their final drive of the night but the clock expired before they could add another score.