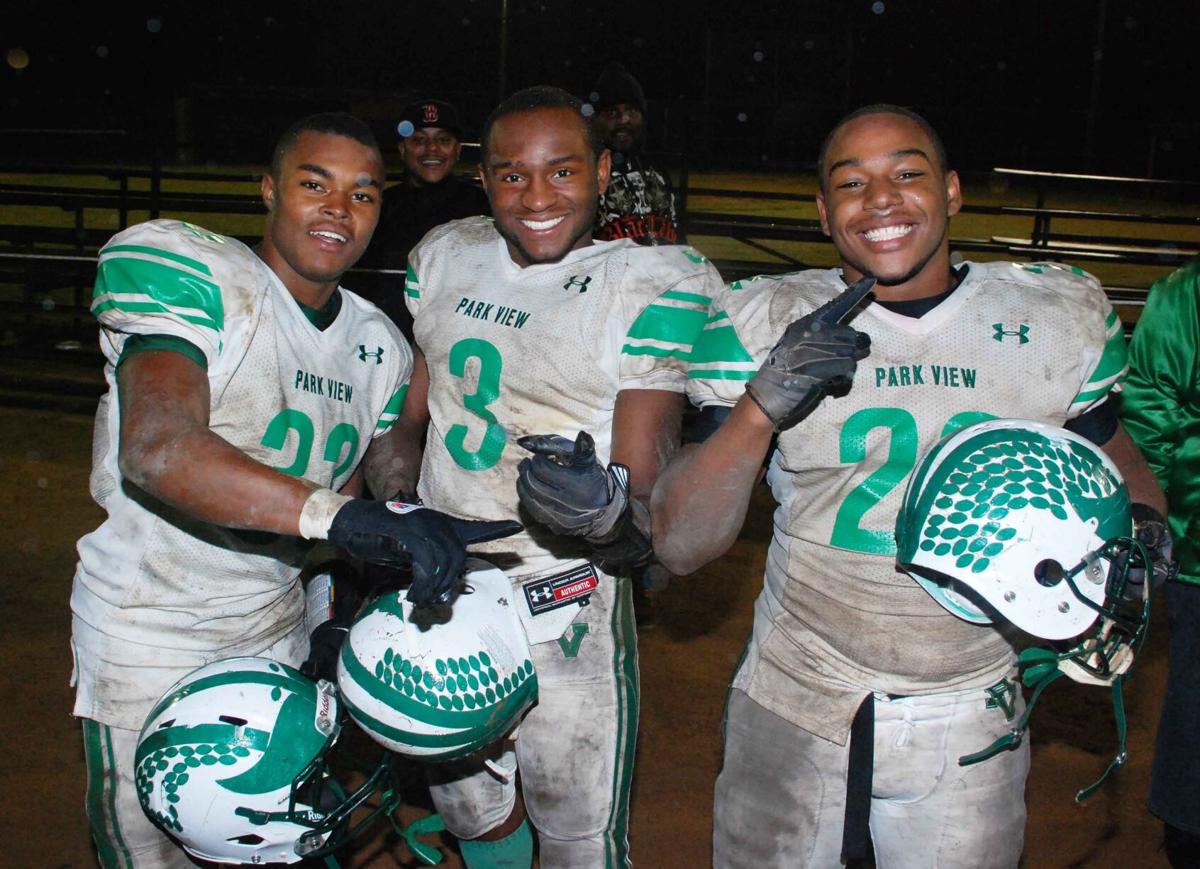 The Park View tailback trio of, from the left, Meeko Harris, Jarius Drummond and Jason Baskerville celebrated after the Dragons’ 42-20 win over Greensville HS in 2011 that gave the local team its first Southside District title since 1982. (Dennis Smith) 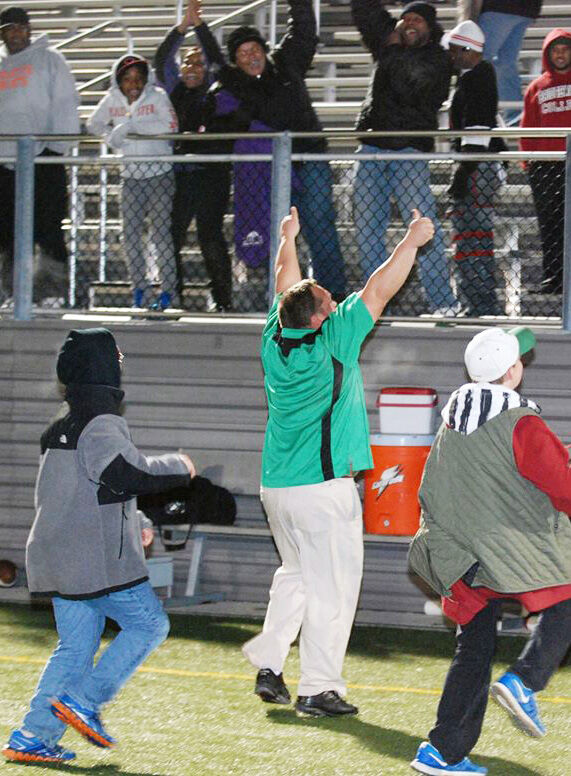 Former Dragons’ varsity football coach Doug Allison gave a salute to the Park View faithful who traveled to Williamsburg in 2012 to watch the local team upset top-ranked Lafayette HS 19-14 in a regional semifinal contest. The win is widely regarded as one of the biggest in Park View football history. (Dennis Smith)

The Park View tailback trio of, from the left, Meeko Harris, Jarius Drummond and Jason Baskerville celebrated after the Dragons’ 42-20 win over Greensville HS in 2011 that gave the local team its first Southside District title since 1982. (Dennis Smith)

Former Dragons’ varsity football coach Doug Allison gave a salute to the Park View faithful who traveled to Williamsburg in 2012 to watch the local team upset top-ranked Lafayette HS 19-14 in a regional semifinal contest. The win is widely regarded as one of the biggest in Park View football history. (Dennis Smith)

(With Park View High School slated to merge with Bluestone HS to form the new Mecklenburg County HS in 2022, the South Hill Enterprise is running an ongoing series that looks back at some of the outstanding athletes and coaches and their stories through the years. This is story No. 10 in the series.)

The 2011 squad was the first to win a Southside District title since 1982 while the 2012 team became the first and only team to win 10 games during a campaign and only the second in school history to advance to a regional title game.

“All four seasons at Park View are some of the most fun and rewarding of my career,” said former Dragons’ coach Doug Allison who was at the helm from 2009-2012. “Each one seemed magical for different reasons: the 2009 run to the playoffs, the 2010 home wins against Appomattox and Brunswick, the 2011 run to the district championship including avenging an early season loss to Southampton with a thrilling 3-overtime win and of course the 10-win run to the regional title game in 2012.”

Park View lost its season opener in 2011 to Jamestown HS but then ran off seven consecutive wins and completed a perfect 4-0 record in Southside District play by topping Greensville 42-20 on a soggy Friday night in Emporia to secure the district title.

Junior tailback Jason Baskerville rushed for a season-high 251 yards on 33 carries with three touchdowns in the title-clinching game while Jarius Drummond rushed for 138 yards on 13 carries and scored two touchdowns.

Meeko Harris blocked a punt and returned an interception for a touchdown while linebacker Vince Cliborne intercepted a pass and recovered a fumble down the stretch to seal the victory.

Park View finished the regular season with a 7-3 record to earn a No. 6 seed for the regional playoffs but fell at third-seeded Lafayette HS, 57-21. That loss would lead to one of the biggest wins in program history the following season.

The Dragons were led in 2011 by Baskerville who finished with 1,255 yards rushing on 203 carries with 20 touchdowns.

Drummond and Harris were the lighting to Baskerville’s thunder in the talented backfield. Drummond finished with 942 yards rushing on 101 carries with seven touchdowns while Harris rushed for 728 yards on 61 carries with six touchdown.

Freshman quarterback Brett Cliborne completed 29 of 66 passes that season for 621 yards and three touchdowns with only three picks.

Junior standout Geo Feggins led the Park View receiving corps with 18 catches for 357 yards and also led the defense with 73 tackles. Vine Cliborne finished with 65 tackles on the campaign while Harris added 60.

The Dragons returned in 2012 hungrier than ever to make a deeper run in the playoffs and the team did not disappoint.

Playing an upgraded schedule, the Dragons opened against a good D4 team in Warhill HS and gave the visitors all they wanted before a late score allowed the Lions to escape with a 20-17 victory.

Park View traveled to Wanner Stadium for their second game of the season and topped Jamestown HS by a 34-28 margin in overtime on a Baskerville touchdown.

“Winning in Williamsburg was a huge hurdle that would foreshadow just how special this team was,” said Coach Allison.

The Dragons shellacked cross-county rival Bluestone HS 66-0 in their third game and ran its winning streak to seven straight before falling 42-26 at Brunswick HS on homecoming night in Lawrenceville behind big games from Bulldogs’ freshman quarterback Darren Owens and tailbacks Jamari Stith and Jakal Williams.

The win allowed Brunswick to complete a 4-0 mark in district play and earn its first district title since 1989.

“We knew that we were in a good position for a playoff berth but responding from the disappointment of not winning the district would be very important,” said Coach Allison. “One of the coolest attributes of this team was the way they responded to every challenge with confidence and trust in each other.  A major reason that these players kept believing even after adversity was the success and chemistry that had been developed as JV players under the leadership of Coach Bruce Cliborne.  Having Coach Cliborne alongside them on Friday nights always kept morale high.”

The Dragons got back on track the following week by topping Greensville 21-0 in the finale to finish with an 8-2 regular season record.

Park View opened the regional playoffs at home and earned a bit of revenge against their archrivals by beating Brunswick 26-0 in a quarterfinal game in South Hill.

“The team was focused,” said Coach Allison. “All three phases of the game were nearly flawless. Not only did we avenge the loss from two weeks before, we shut out the district champions.”

Travon Previtire intercepted two passes and recovered a fumble as the Park View defense led the way in the victory.

“We were flying high after what was the team’s first playoff win in six seasons,” said Coach Allison.

The win set up a historic 19-14 victory over top-seeded Lafayette HS in Williamsburg to advance the Dragons’ to the regional title game.

After falling behind 14-0 to Lafayette, Terrie Pettus scored on a 58-yard touchdown run for the Dragons and then Geo Feggins added a tying touchdown on a perfectly executed fake punt that he ran in from 50 yards out for a score.

“The big plays were not over,” said Coach Allison. “Trailing by one-point late in the fourth, Brett Cliborne hooked up on a brilliant route by junior wide receiver Noo-Noo Patterson that took us from deep in our own territory all the way to a first and goal, setting up the game winning touchdown.”

A late interception by Feggins helped put the wraps on the victory.

“Pulling this off a week after the playoff win against Brunswick put two exclamation points on the season,” said Coach Allison.

Playing without several key starters who were out with injury, the Dragons did not have enough left in the tank and fell 36-0 at James Monroe HS in the Region 1, Division 3 title game to finish the season with a school record 10 wins and three losses.

“Our season came to a close against the eventual state runners-up,” said Allison. “But there were glimpses of how gritty the team was even when overmatched.  Many players showed determination playing with injuries that had been sustained over the tough stretch. For example, Jason Baskerville was cleared to return to the lineup and shredded the defense with gashing runs trying to play through pain. Ultimately the season ended in Fredericksburg but that team is very much still alive with the coaches and players that remain in contact to this day.”