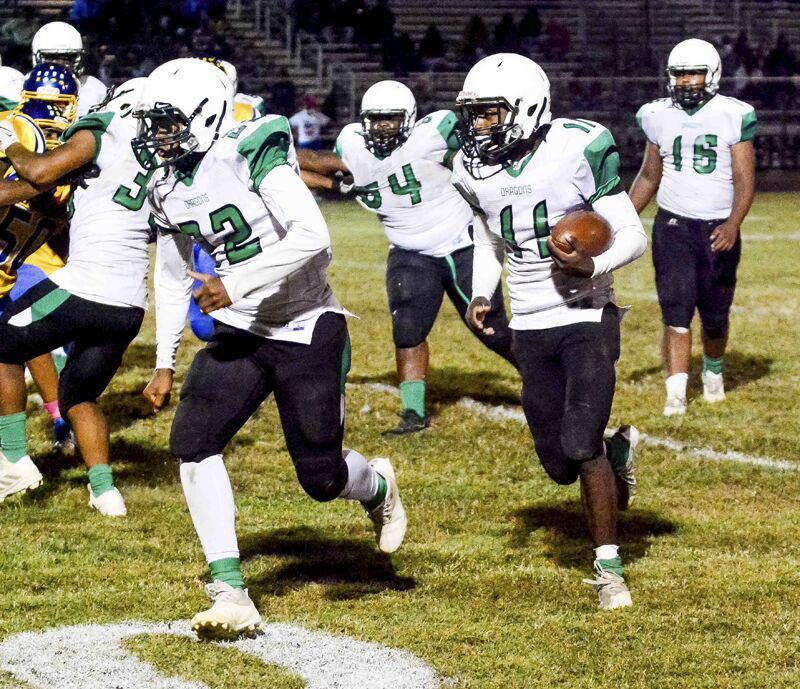 Tomar Logan recorded two sensational catches on Thursday night at Surry HS and rushed for 210 yards with three touchdowns but the Dragons fell 64-42 in a Tri-Rivers District shootout. (Dennis Smith) 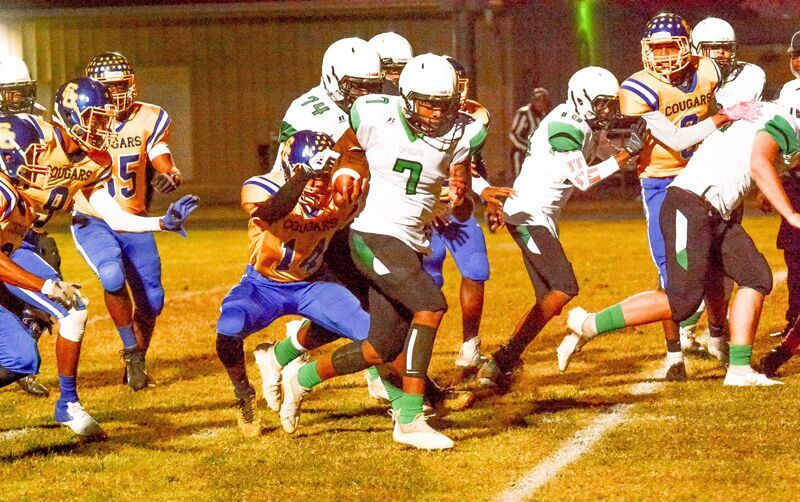 Park View’s Tyliq Minor plows ahead for good yardage in action from Surry’s 64-42 win over the Dragons on Thursday night. (Dennis Smith)

Tomar Logan recorded two sensational catches on Thursday night at Surry HS and rushed for 210 yards with three touchdowns but the Dragons fell 64-42 in a Tri-Rivers District shootout. (Dennis Smith)

Park View’s Tyliq Minor plows ahead for good yardage in action from Surry’s 64-42 win over the Dragons on Thursday night. (Dennis Smith)

For the handful of local fans that made the long trip, the final road game in Park View High School football history is one they will not soon forget.

In a game that featured over 800 yards of offense, 35 first downs, a total of 106 points scored, and a whopping 26 penalties for 195 yards against Park View, it was home standing Surry HS that claimed a 64-42 win in the Thursday night shootout.

“It seemed like we hadn’t played in a month,” Park View coach Tony Whittingham, Jr., said about missing the previous two Friday night games due to COVID contact tracing by their scheduled opponents, “but I thought we played well. We’ve had some challenges but I think we have represented our school well. We are doing our best. (Even though our record doesn’t show it,) I don’t think any of our opponents would say we haven’t competed. My kids are always going to play hard.”

The scoring frenzy started early in the game as Park View took the opening kickoff and went to work as Tomar Logan picked up 25-yards on his first run from scrimmage and Tyliq Minor added 15-yards to move the ball into the redzone.

After two penalties backed the Dragons up, Minor broke a run down to the 1-yard line and quarterback DeAndre Watson scored from 1-yard out for a 6-0 lead at the 8:45 mark of the opening quarter.

Surry took advantage of a short kickoff to begin their first drive at the Park View 30-yard line and went to work as a 12-yard pass completion moved them into the redzone and Harrygan Kelly, Jr., scored on a 1-yard touchdown run to knot the score at six at the 5:21 mark of the first quarter.

The Dragons got an 18-yard run from Minor on their next drive but Surry was able to come up with a stop on fourth-and-long from midfield.

The Dragons answered on their next possession as Minor picked up 16-yards on a nice run up the gut and Logan broke a 19-yard run to move into the redzone. Two plays later, Watson scored on a quarterback sneak for a 12-12 tie at the 8:341 mark.

On the ensuing kickoff, Rymon Smith kicked a perfect ball that stopped on a dime inbounds in front of two Surry players and Dennis Alexander recovered the loose ball to give possession back to Park View.

Surry came right back as Anthony Tynes scored on a 16-yard touchdown run to knot the score at 18 at the 3:53 mark.

On the ensuing kickoff, a Park View player made contact with the football on a high bounce and Surry was able to recover.

The Cougars took advantage of the short field to get on the scoreboard again when Kelly scored on a 7-yard touchdown run and Tynes converted a 2-point pass completion for a 26-18 lead with 1:01 left to play in the first half.

The Dragons however would not be denied in the final minute as Logan made the catch of the season when he knocked a hail-mary pass away from two Surry defenders and caught the ball in the end zone for a spectacular touchdown grab with no time left on the clock. Minor ran in the 2-point conversion to knot the score at 26 going into the halftime break.

Surry took the kickoff to open the second half but the Park View defense came up with a stop to take over at their own 25-yard line. Faced with fourth-and-2 the Dragons went for it from their own 33-yard line but the Cougars defense came up with a stop. On the next play from scrimmage, Tynes scored on a 29-yard run and then converted a 2-point conversion pass for a 34-26 lead at the 6:10 mark of the third quarter.

The Dragons once again answered when Logan broke a 59-yard touchdown run up the visitors sideline and Watson hit Logan with a 2-point conversion pass to knot the score at 34 at the 4:00 mark of the third quarter.

Surry quickly answered as Damon Moody broke a 45-yard run down to the Park View 2-yard line and Tynes scored on a quarterback sneak. A successful 2-point conversion run gave the Cougars a 42-34 lead at the 3:35 mark of the third quarter.

Park View’s Dewun Clark came up with a fumble recovery for the Dragons later in the third quarter but the local team was not able to convert on fourth down early in the fourth quarter and Surry took over on downs.

The Cougars came up with a Park View fumble on the next play from scrimmage and scored on a 10-yard touchdown pass from Tynes and converted the 2-point conversion for a 58-34 lead with 8:10 left to play.

The Park View sideline became enraged on the following kickoff when Minor was tackled in front of the Surry bench for the second time in the game as a number of players on the home sideline surrounded him following the tackle. Minor was whistled for a personal foul, his second of the game, and had to leave the contest. The Park View coaches had asked the 7-man officiating crew for help after the first flag on Minor following a tackle on the home side line but once again the Park View player was the only one who was flagged.

The Dragons did not quit however and Alexander scored on a 44-yard touchdown run and Park View added a 2-point conversion run to cut the lead to 58-42 with 5:56 left to play.

With under a minute left to play, Surry took over at the Park View 8-yard line following an interception and Kelly scored on a 92-yard touchdown run for a 64-42 lead with 52 seconds left to play.

Watson hit Alexander with a 66-yard pass completion with under thirty seconds to play but the touchdown, the second of the night to be called back due to penalty, was flagged for an illegal man downfield.

Logan led the Park View rushing corps with 210 yards and two touchdowns on 27 rushes while catching two passes for 44 yards and another score. Minor finished with 86 yards rushing on 10 carries while Alexander added 54 yards on three carries with a score.