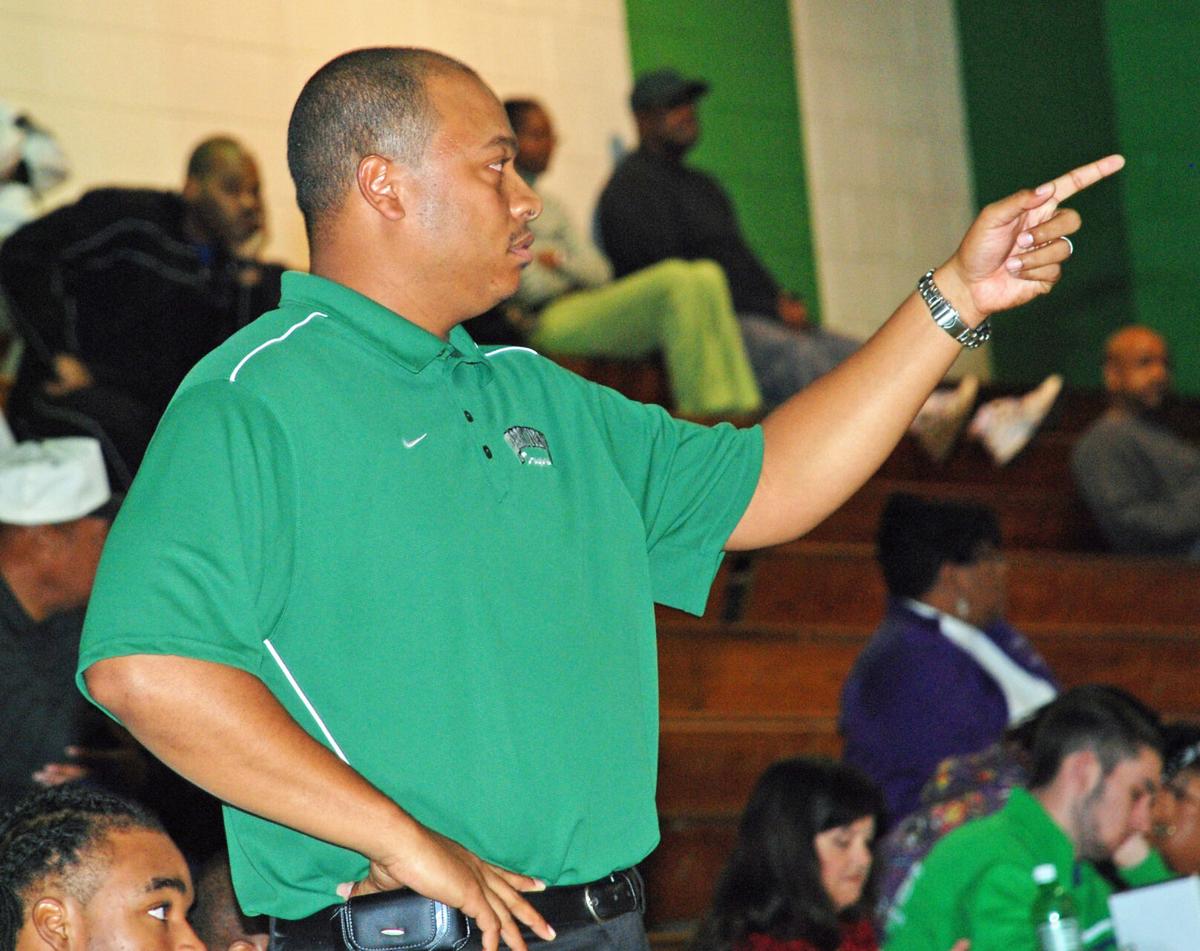 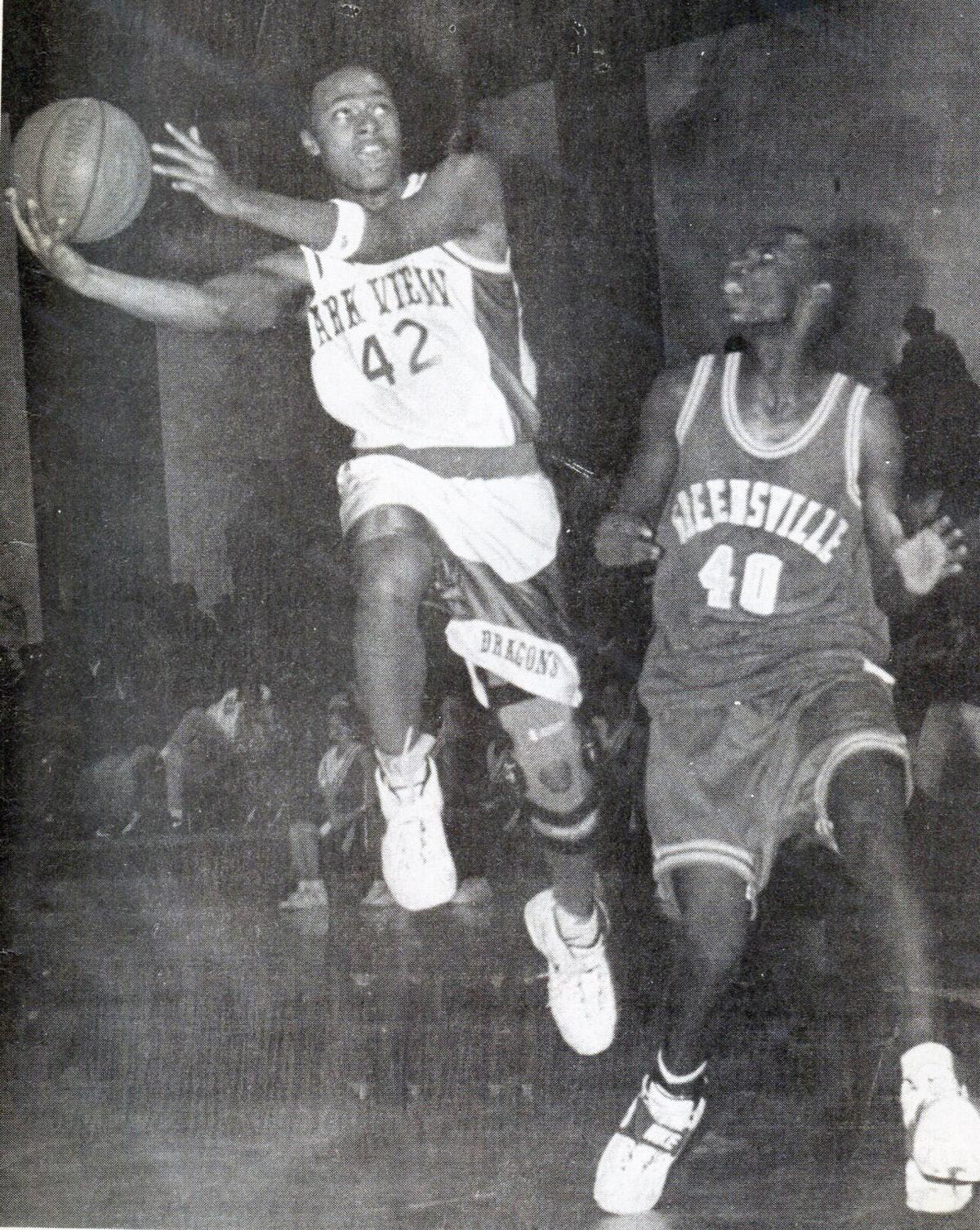 Ivin Parker drives to the hoop by Greensville’s Antwan Walton in a contest during the 1996 season. (Dennis Smith)

Ivin Parker drives to the hoop by Greensville’s Antwan Walton in a contest during the 1996 season. (Dennis Smith)

(With Park View High School slated to merge with Bluestone HS to form the new Mecklenburg County HS in 2022, the South Hill Enterprise is running an ongoing series that looks back at some of the outstanding athletes, teams and coaches and their stories through the years. This is story No. 33 in the series.)

Ivin Parker is certainly no stranger to the Park View High School hoops fan base, having been a standout on the Dragons basketball team from 1993 to 1997 and then returning as the head coach of the varsity basketball program from 2007 to 2014.

Parker played on the Park View JV team during his freshman year before being called up to the varsity team late in the season.

He earned a starting spot on the varsity team in his sophomore year as a 5-11 forward.

Despite his size, Parker was a tenacious defender and aggressive rebounder.

“I was the young buck on that team and the older guys took me under their wing in my sophomore year. I rebounded well and I could jump pretty good,” he said. “That was my role. I would get stats from offensive rebounds and points from the free-throw line.”

Parker also showed he was going to be a great scorer in the program, putting up 20 points in an 84-65 win over Matoaca HS that season.

He had a big junior year for Park View, earning All-District honors while averaging double-digit points per game.

“We didn’t win a lot of games that season but the Southside District was loaded,” he said. “It was a battle every night.”

Unfortunately, Parker tore the ACL in his left knee playing basketball that summer.

He decided to wait until after his senior season was completed to have surgery.

“I didn’t know then what I know now,” he said. “It hindered my play as I had no lateral movement. It really put a damper on my basketball career. After you get hurt, the college coaches tend to look elsewhere.”

Parker decided to continue his education at Hampton University and after rehabbing his knee, was preparing to try out for the men’s basketball team. While playing in his first intramural game, he tore the ACL in his right knee.

“I think the Lord was trying to tell me I needed to go sit down,” he said. “The dream of playing college basketball was over.”

Parker got his first taste of coaching while at Hampton.

“We did some mentoring for kids and coaching basketball was a part of that,” he said.

After graduating from Hampton in 2001 with his Bachelor’s Degree in Sports Management, Parker returned home and started looking for employment.

“Shirley Curtain told my Dad to tell me they had a Physical Education teaching job open at Park View Middle School and I should apply,” he said. “I had not even thought about teaching but I applied and they gave me my first job.”

“Three games in and Coach Williams had to have surgery on his knee,” said Parker. “He didn’t return so I took over the team.”

“We went 0-9 that season,” he said. “I thought to myself, they are not going to continue to let me coach if we are losing games so I got more serious about it.”

The Cougars went to the conference tournament title game each season for the next three years, winning a championship in 2004.

“We had some really good athletes,” he said.

Parker coached the JV boys’ basketball team at Park View in 2006-07 and went 13-3 and then took over the varsity team the following season when Coach Michael Greene stepped down.

The Dragons finished as Southside District regular season co-champions in his first year, falling to Brunswick in the district tournament championship game. The Dragons rebounded from the loss and advanced to the regional semifinals in the playoffs.

“We had a great team,” Parker said.

He took the Dragons to the district tournament finals a total of three times in his seven seasons, earned regional berths five times, and advanced to the regional semifinals twice.

“Brunswick has always been the thorn in my side in the Southside,” said Parker. “But Brunswick actually helped me have some of my success. They made your prepare for them and it helped make our players better and bring them together.”

Parker went to Sussex-Central HS in 2015 serving as an assistant coach for one year before taking over the varsity team.

The Tigers have earned regional bids in four of the past five years under Parker and advanced to the state tournament last year for the first time since 1992.

“It created a lot of buzz in the community,” he said.

Parker said some of his fondest memories as a player involved practice.

“Coach (C.W.) Gee didn’t give us many days off,” he said. “Anytime we were running five on five, we always went hard and had a lot of fun.”

Parker said local basketball fans still remember a big dunk he had during his sophomore season at the old Dog Pound against Brunswick HS.

“People still come up to me and tell me they remember that,” he said.

Parker said one of his greatest moments as a coach was that all of the seniors on his 2012 Park View HS team were accepted to four-year colleges.

“I have always been a stickler about grades,” he said. “That was bigger for me than any win or loss. There is life after basketball.”

Parker lives in South Hill with his wife Candy and children Nylah, Camille and Brian.