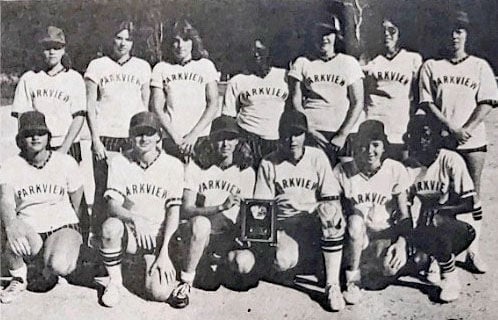 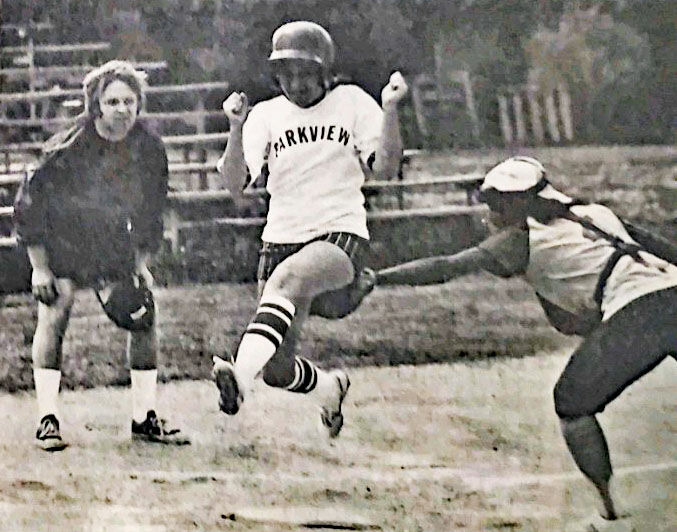 Park View’s Susan Croft was able to get pass the tag of  Bluestone’s Adora Salley on this play at the plate in action from the Lady Dragons’ 10-9 win over the Lady Barons in the one-game playoff between the 1978 Southside District co-champions for a berth in the Region I title game. (Enterprise photo)

Park View’s Susan Croft was able to get pass the tag of  Bluestone’s Adora Salley on this play at the plate in action from the Lady Dragons’ 10-9 win over the Lady Barons in the one-game playoff between the 1978 Southside District co-champions for a berth in the Region I title game. (Enterprise photo)

(With Park View High School slated to merge with Bluestone HS to form the new Mecklenburg County HS in 2022, the South Hill Enterprise is running an ongoing series that looks back at some of the outstanding athletes and coaches and their stories through the years. This is story No. 32 in the series.)

The Park View High School softball team put together quite a campaign in 1978, winning eight straight games to end the regular season including a thrilling 10-9 victory over Bluestone HS in a one-game playoff to earn a bid to the Group AA, Region I finals.

The Lady Dragons and Lady Barons both claimed a share of the Southside District regular season title after finishing with 9-3 records. Park View topped Bluestone twice during the regular season and then again in the winner-take-all playoff contest.

Bluestone got off to a good start in the game as Gayle Harris drove in Delta Bowers with a RBI hit and then scored on an error for an early 2-0 lead.

Park View answered in the bottom of the inning when Helen Nichols and Carolyn Talley scored on errors to knot the score at two.

Adora Salley scored for Bluestone for a 3-2 lead in the second inning but Park View answered with three runs as Donna Cappaert, Nichols and Susan Croft all scored to give the Lady Dragons the lead.

The Lady Dragons took a 6-4 lead in the third inning when Cappaert reached on a hit to right field and raced around the bases to score on the play.

Bluestone answered in the fourth inning when Venable went deep for a 2-run homer to score Cindy Owen and tie the score at six.

Bonita Goode scored on three Park View errors in the fifth inning to give Bluestone a 7-6 lead.

Debbie Piercy scored for Park View on a Cappaert single in the sixth to knot the score at seven.

Bowers and Venable scored for Bluestone in the sixth inning and the Lady Barons loaded the bases but Park View got a fly out to avert further damage. The Lady Dragons answered in the bottom of the sixth when Croft and Ann Piercy scored to knot the score at nine.

In the bottom of the seventh, Park View captured the win when Vicky Wilson singled and scored on a RBI single by Cappaert for a 10-9 victory.

It was a thrilling win for Park View to send the local girls to the regional finals for the first time in program history.

The game came at a cost however as sophomore catcher Donna Allgood suffered a fractured ankle on a play at the plate in the fifth inning and was lost for the regionals.

The Lady Dragons could not keep the winning streak going in the regional championship game and fell 11-6 to Bruton HS.

The Lady Panthers jumped out to a 2-0 lead in the first inning and then added five runs in the second to take a 7-0 lead.

Park View fought back and scored six runs in the fourth inning to trim the lead to one.

Bruton added two runs in the fifth inning and two in the sixth to advance to the state tournament.

Malinda James picked up the win on the mound for Burton while Piercy took the loss for Park View.

First year Park View Coach Margaret McAlevy said after the game that the Lady Dragons outhit Burton (5-4) but made too many errors in the field.

A 9-4 record, a district co-championship and a regional runner-up title however were the spoils of a great season for the Lady Dragons in 1978.