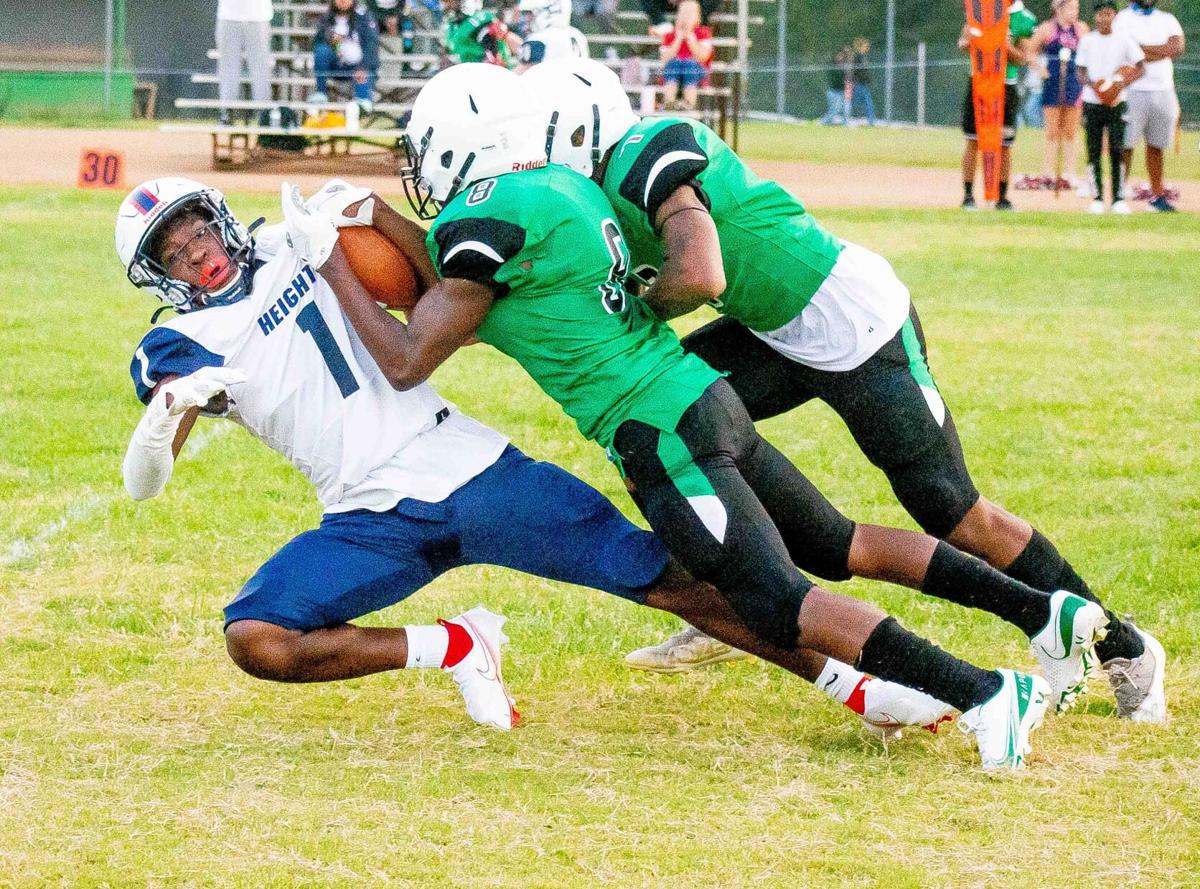 Park View’s Jaheem Smith (8) and Tylik Minor (7) came up with a big hit on Colonial Heights’ Maurice Harmon on this play in action from the Colonials’ 40-34 double overtime victory in South Hill on Friday night. (Dennis Smith) 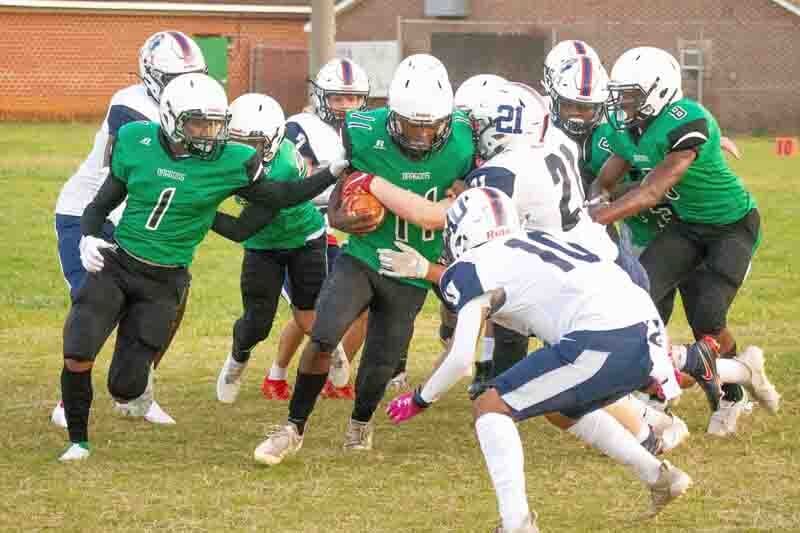 Park View’s Jaheem Smith (8) and Tylik Minor (7) came up with a big hit on Colonial Heights’ Maurice Harmon on this play in action from the Colonials’ 40-34 double overtime victory in South Hill on Friday night. (Dennis Smith)

The Park View High School varsity football team showed a ton of heart on Friday night overcoming a 22-6 halftime deficit to knot the score in the fourth quarter before ultimately falling 40-34 in double overtime to visiting Colonial Heights HS in their home opener.

The loss dropped the Dragons to 1-1 on the season while Colonial Heights improved to 1-1.

“They played really hard,” Park View Coach Tony Whittingham, Jr., said of his young team. “It is a tough loss. We know what we want to do and I think if we can do that we will have a successful season. I couldn’t ask for anymore then what they gave. They showed resilience tonight. We’ve just got to keep working and getting better.”

The Colonials took the opening kickoff and behind their big quarterback marched 55 yards on six straight rushes to get on the scoreboard on a 1-yard touchdown run. CH added a 2-point conversion run for an 8-0 lead at the 10:09 mark of the opening quarter.

The Dragons picked up two first downs on their first offensive possession but a fourth-and-four rush was stopped short of the marker as the Colonials took over on downs.

After a 15-yard pass completion moved the ball onto the Park View side of the field, a 15-yard penalty moved the Colonials back to midfield. On the next play, Colonial Heights connected on a 50-yard touchdown pass. The 2-point conversion run extended the lead to 16-0 at the 4:27 mark of the first quarter.

The Park View offense then dug its heels in and put together a scoring drive. A 31-yard run by Tylik Minor moved the ball onto the Colonials’ side of the field.

A 16-yard run by Park View quarterback DeAndre Watson moved the ball into the redzone and five plays later, Tomar Logan scored on a 1-yard touchdown plunge to cut the Colonial Heights lead to 16-6 at the 10:41 mark of the second quarter.

The Park View defense came up with a stop on the Colonials next offensive series.

The Dragons drove into Colonials territory but a fumble was recovered by Colonials Heights near midfield.

The Colonials took advantage of a 31-yard run by Benjamin Holmes to move deep into Park View territory and he scored on a 7-yard touchdown run to give Colonials Heights a 22-6 lead at the halftime break.

Park View took the second half kickoff and went to work when Logan found a seam on the outside and broke through for a 70-yard touchdown run. A 2-point conversion run by Minor cut the Colonials lead to 22-14 at the 10:45 mark of the third quarter.

The Dragons came up with a big fumble recovery on the ensuing kickoff as a short high kick was recovered by Park View.

Park View drove to the Colonials Heights 15-yard line but a 15-yard penalty against the Dragons moved them out of scoring range and a fourth down pass attempt fell incomplete.

After stopping Colonial Heights on their next offensive series, the Dragons went back to work as several good runs by Logan and Minor moved the ball near midfield and TJ Alexander broke a run for a 50-yard touchdown.

Despite a 5-yard penalty against the Park View sideline for celebrating out of the coaching box, Watson hit Logan for a successful 2-point conversion pass to knot the score at 22 with 5:38 left in regulation.

The Colonials went back to their big quarterback on the next series as he picked up 35-yards on a big gallop to move into the Park View redzone and scored two plays later on a 4-yard touchdown run to give Colonial Heights a 28-22 lead with 3:23 left to play.

The Dragons did not take long to answer as Logan broke to the outside on the first play from scrimmage following the kickoff and scored on a 75-yard touchdown run to knot the score at 28 with 2:59 left to play.

The Colonials moved to the Park View 10-yard line with 13 seconds left to play but the Dragons defense batted away a fourth down pass attempt to force overtime.

Park View took possession of the ball first in the extra session as Logan scored on a 10-yard gallop on second and goal to give the Dragons a 34-28 lead. The 2-point conversion run attempt was foiled by Colonial Heights.

The Colonials answered with a 10-yard touchdown run on the ensuing play but Park View came up with a big hit on the 2-point conversion attempt to force a second overtime period.

Minor picked up seven yards on Park View’s next play to move to the 3-yard line but the Dragons were not able to convert as a fourth down pass attempt fell incomplete.

The Colonials clinched the win when Holmes scored on third down to give the visitors a 40-34 victory.

The Dragons will travel to South Boston to battle with Halifax County on Friday night for its final non-district contest of the regular season.