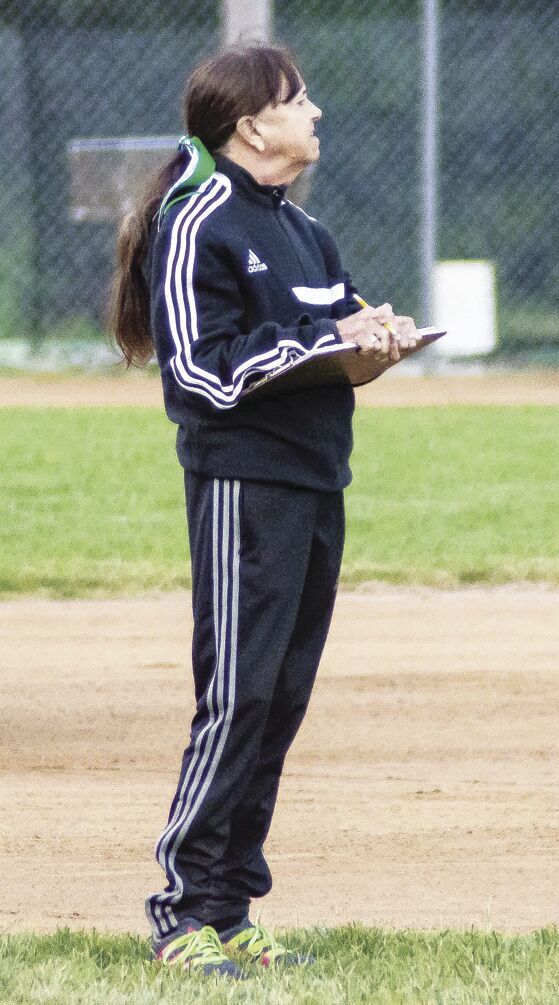 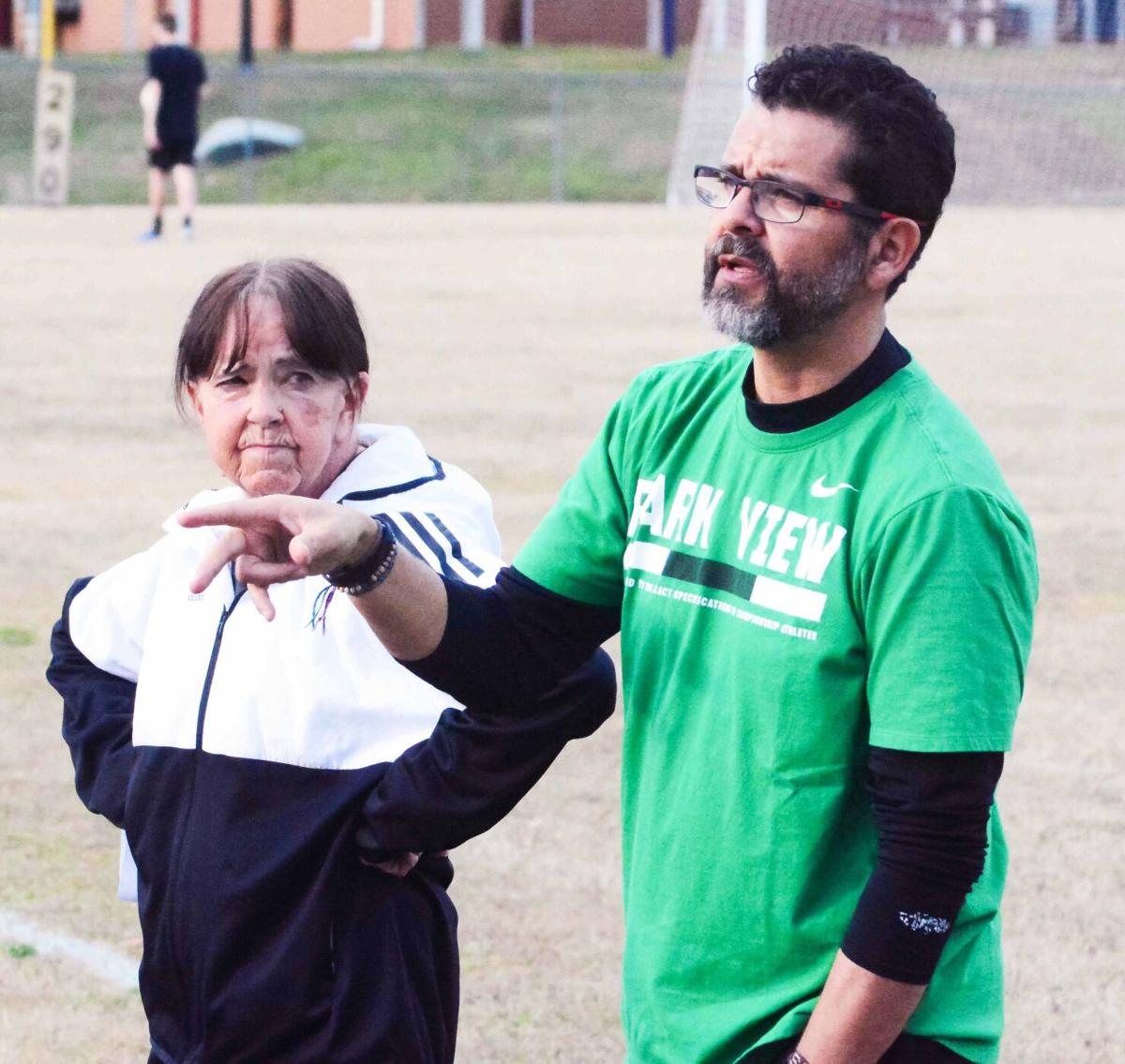 (With Park View High School slated to merge with Bluestone HS to form the new Mecklenburg County HS in 2022, the South Hill Enterprise is running an ongoing series that looks back at some of the outstanding athletes and coaches and their stories through the years. This is story No. 22 in the series.)

Longtime boys’ soccer coach Trudy Gentry has been an anchor for the athletics program at Park View High School for the past four decades.

Gentry started her career coaching the Park View Middle School 8th grade girls’ basketball team from 1985-1988 before joining Coach Phyllis Williams’ staff at the high-school as an assistant coach from 1989-1997.

Gentry has also served as the clock keeper at Park View boys and girls basketball games since 1983 and has kept the scoreboard for volleyball matches since the program started in 1998. In addition, she served as the varsity girls track coach one year in the early 80’s when Coach Sherry Pearson was out on maternity leave.

Gentry said interested parents helped to get the Dragons’ soccer program started during the 1998-99 school year.

“Soccer was very new in our area at the time and there was some resistance at first,” she said. “The parents raised all the money to fund the sport, including cost of goals, balls, uniforms, practice equipment, etc. by asking for donations from businesses and supportive people in the community.”

Thomas Fox served as the first coach for the team while Marvin LeBlanc, Bill Doyle, Joe Glynn and Gentry worked as assistant coaches that first season.

“I volunteered because I liked the sport, it was coed at that time, and parents thought a woman should be part of the staff since the team was going to be coed,” said Gentry.

When Fox left, Gentry was asked to take over as the head coach.

Bill Doyle served as an assistant to Gentry for three seasons while Glynn continued to volunteer through 2003. Pepe Pacheco joined the staff that same year.

“We only won one game that first year (1999) and got beat by as many as eight and even ten goals many times,” she said. “Although we did not have a winning season that first year, Park View soccer won the sportsmanship award for the Southside region from the Richmond Referee Association.”

Kevin White, who now serves as an assistant football coach at Park View, was a senior player on the first boys’ soccer team.

“He had never played soccer before but he was such an athlete,” said Gentry. “He received First Team All-District and Second Team All-Region honors that year. That tells you what a great competitor and athlete he was!”

The Dragons won five games in their second campaign and seven in their third year.

“When we won the district and tournament championships in 2004, along with beating Powhatan for the first time ever, I credited Pepe for all of that,” said Gentry. Pacheco, who coached the Park View Middle School soccer team, became a paid varsity assistant in 2005.

“He and I have been coaching together since then. We both share the same philosophies about coaching and have worked so well together ever since. We both believe that success in any sport, or anything for that matter, starts with discipline,” she said. “If you do not have a disciplined team, no matter how skilled they may be, you cannot be successful. Discipline includes preparing for games by practicing every day, being committed and working hard. Discipline also applies to games, as well as to each individual player in other areas of their life such as at school, at home, etc. So for us, discipline always comes first.”

Gentry said Pacheco has been instrumental to the success of the program.

“Let me be perfectly clear when I say that Park View soccer has been successful for so long because we are fortunate enough to have Pepe Pacheco on the coaching staff,” said Gentry. “He is so knowledgeable about every aspect of the game and he has so much experience in soccer and such a passion for the sport. I have learned so much from him about soccer since he has been a part of our team. He motivates the kids to perform at a high level and they listen to him because they understand that he knows what he is talking about from experience. He has helped develop our team into an “attack” team rather than a passive team that sits back and waits for something to happen. He has helped us to play a new defensive game, pushing the defense up-field to shorten the playing field and to catch the other team offside. We did not do that before he came to our team. He has also helped improve our entire team’s passing skills. We also practice indoor and outdoor which helps develop different skills as well.”

Gentry said the local YMCA soccer program and the Lake Gaston Soccer Association have also been big factors in progressing the sport in the area over the last two decades.

“These programs get kids started early playing the game. In addition, the soccer program at the middle school has contributed to our success tremendously. With Pepe coaching that team, he teaches them the skills they need before they get to the high school team which has helped provide continuity for our program. Furthermore, having supportive administrations, athletic directors, and parents has helped us to be successful throughout the years.”

The Dragons have had seven District Player of the Year award winners; Jonathan Walton (2004), Anthony

Gentry, who played basketball at Park View from 1973-76, was part of a district championship team in 1974.

Gentry graduated as the Valedictorian from Park View in 1976 and graduated from Meredith College in 1980 with a BS degree in Mathematics and licensure in secondary education. She began teaching at Park View Middle School that fall and moved to the high-school the following year where she taught Physics until she retired in 2014 with 34 years of service.

Gentry also served as the Beta Club sponsor from 1981 until she retired while also coaching the Quiz Bowl for three years.

Gentry said even though basketball has always been her favorite sport, she also loves soccer.

“I love soccer because of the intensity and fast pace of the game. I love seeing the kids develop their skills and have fun playing a game they love,” she said. “I love the effort and how hard the kids work to compete against each other in practices and against opponents on the field during games. I love the development of a “family” atmosphere where we win together and lose together; where the players care for one another and look out for each other, where as a team, we are one.”

She said her love for teaching aligns perfectly with coaching.

“I love coaching because it gives me the opportunity to teach, not only the basics of a particular sport, but also life lessons that hopefully will stay with the kids and help them be successful in the future. As a coach, you get to see your players mature and become responsible young men and women,” she said. “You try to teach them how to win humbly, how to lose gracefully, and how to be in control of their emotions on and off the field. You try to teach them that determination and hard work are necessary to succeed, that no one will ever give them anything, they have to work for it. And having worked for it, the success will then have more value and meaning simply because of the hard work and effort that was put into it. You teach them how to function and succeed as a team, how to make decisions on the field that are best for the team, not an individual. So coaching is just an extension of the classroom and I have always loved teaching. Seeing the kids achieve these things is the greatest reward for a coach!”

Gentry said she is planning to step down from coaching when Park View and Bluestone merge to form the new Mecklenburg County HS in 2022.

“I plan to retire from coaching when the new consolidated school opens,” Gentry said. “I can honestly say that I have enjoyed my years teaching and coaching and I have been fortunate enough to have always had supportive administrators throughout my career, making my job fulfilling and rewarding.”