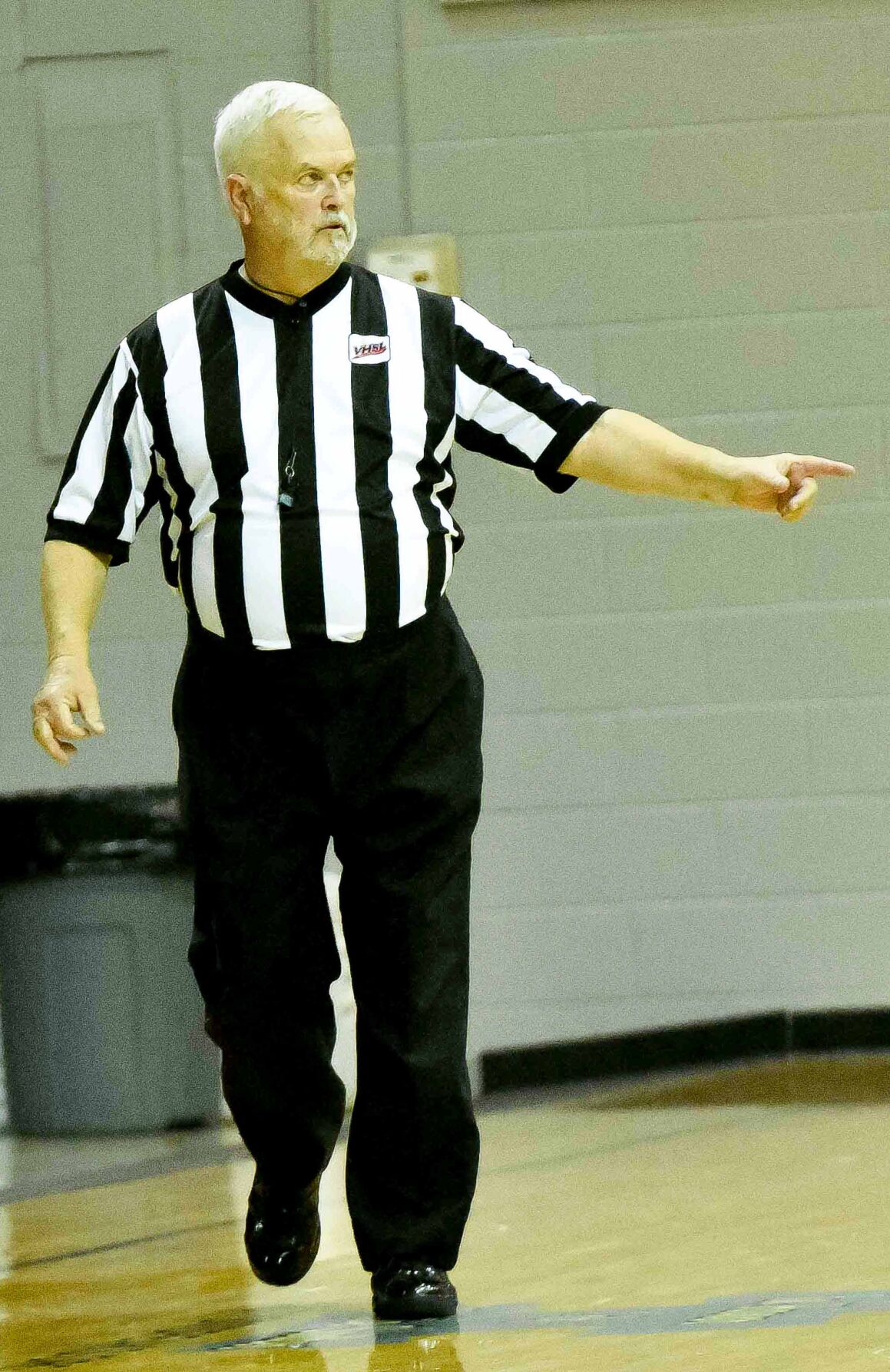 Mike Moody, who is in his 46th year working as a VHSL official, is pictured during a girls’ basketball game at Brunswick Academy in November. (Dennis Smith) 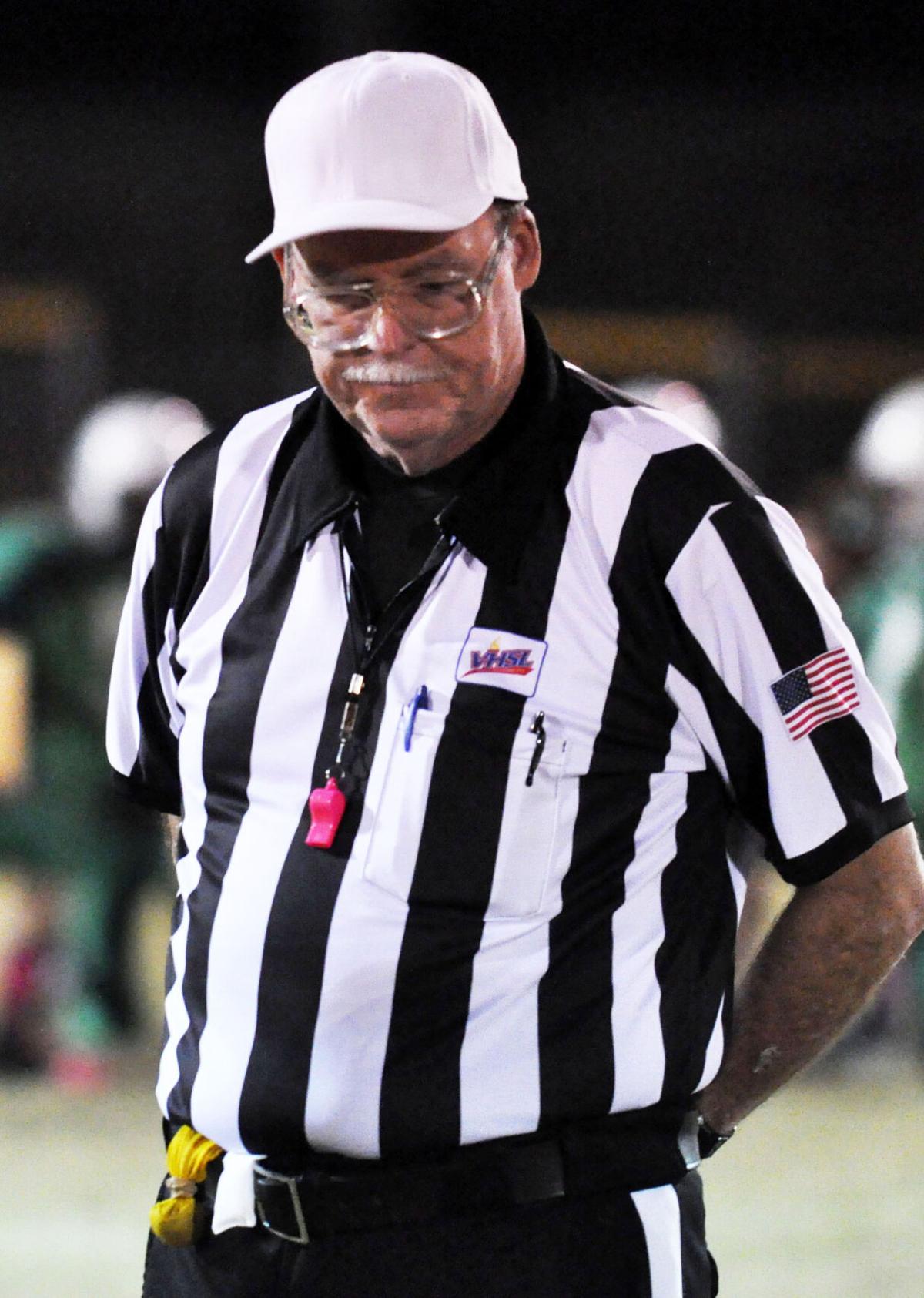 Dan Tanner, who is coming up on his 40th year of serving as a VHSL football official is pictured during a break in action at a contest at Park View HS in 2017. (Dennis Smith) 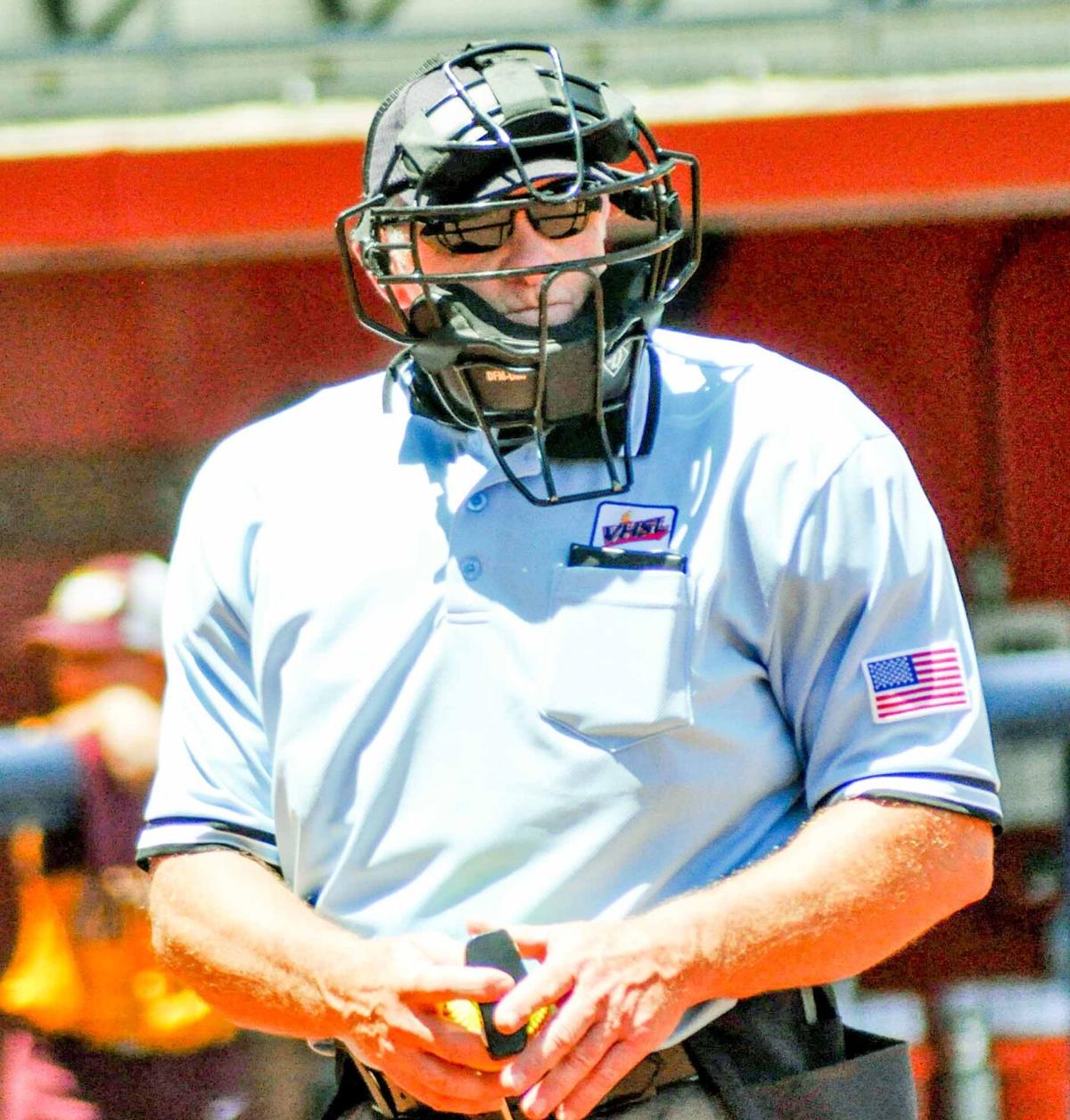 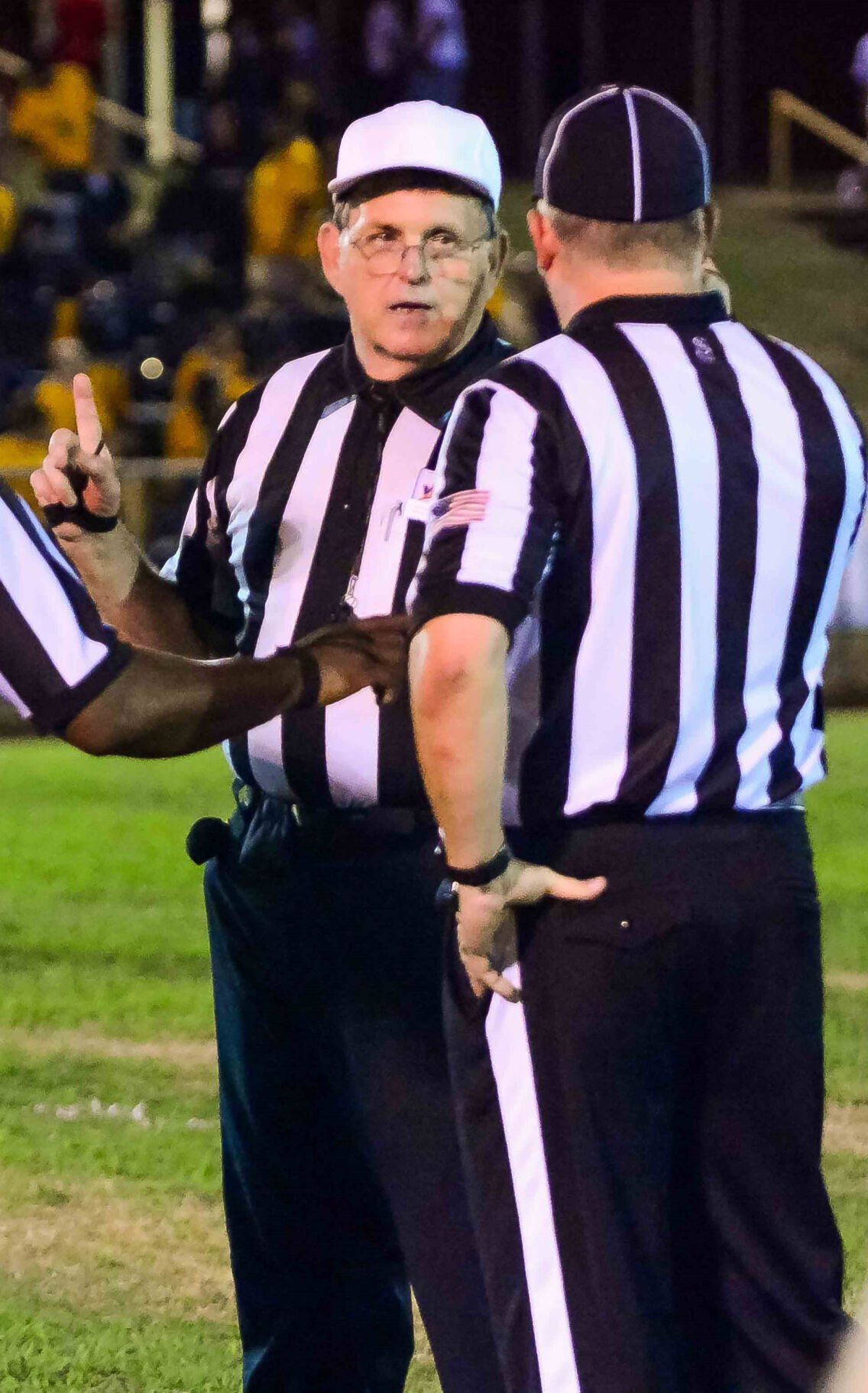 Matt Clark is pictured working the final King of the County contest between Park View and Bluestone in Skipwith in September, 2021. Clark has worked as a VHSL official for 38 years. (Dennis Smith)

Mike Moody, who is in his 46th year working as a VHSL official, is pictured during a girls’ basketball game at Brunswick Academy in November. (Dennis Smith)

Dan Tanner, who is coming up on his 40th year of serving as a VHSL football official is pictured during a break in action at a contest at Park View HS in 2017. (Dennis Smith)

Matt Clark is pictured working the final King of the County contest between Park View and Bluestone in Skipwith in September, 2021. Clark has worked as a VHSL official for 38 years. (Dennis Smith)

(With Park View High School slated to merge with Bluestone HS to form the new Mecklenburg County HS in 2022, the South Hill Enterprise is running an ongoing series that looks back at some of the outstanding athletes, coaches, support personnel and their stories through the years. This is story No. 68 in the series.)

There have been some outstanding Virginia High School League officials over the years to come from our local area.

At one time or another, all have had to officiate a contest involving county schools Park View and Bluestone.

Most agree that it can be challenging to officiate a contest involving a local school because you see the players, coaches and parents out in the community. The focus as it is for all games is to call the game based on the rules and the correct application of the rules.

Local VHSL official Al Brooks, who serves as President of the Central Virginia Football Official’s Association, said he loves it when he hears about a great contest and officiating is not mentioned.

“(As an official,) you don’t want to affect who wins or loses,” he said. “It’s tough to call at home because you are going to see those coaches, parents and athletes. You just have to do your job and make sure you know the rules and apply them correctly.”

Brooks, who has been officiating for 30 years, began calling baseball and softball before starting as a football official in 1995.

“I have always loved sports and it is a way for me to give back,” he said. “You get to work with some great coaches and you get to keep up with the youth and watch them come up.”

Brooks has umpired and officiated a number of regional and state games including Park View’s state softball semifinal game in 2016 against Brookville HS at Liberty University in Lynchburg.

“I worked the plate when Odicci Alexander pitched,” he said. “She did a great job. We have had some great athletes come out of both county schools.”

Brooks said officials are especially aware when they are calling rivalry games and try to do some preventative officiating to keep emotions in check and the game under control.

“You know you have to be on your ‘A’ game because the games mean something to both teams,” he said. “You want to keep the players safe and make sure that no team gets an unfair advantage.”

Local official Dan Tanner is coming up on his 40th year of officiating high-school football.

“I enjoy the kids and I love the sport,” said Tanner. “I want the kids to learn the life lessons I learned when I was playing.”

Tanner also called baseball and basketball in his younger days.

“In my single days, I did baseball and basketball but football has always been my favorite,” he said.

Tanner, a member of the Park View HS Class of 1973, played offensive line and linebacker for the Dragons under the direction of coaches Harold Wise and Eddie Crowder.

“I enjoyed both of them,” he said.

Tanner said whatever game he is working whether it is a state playoff game or a contest between two 0-8 teams always gets his complete focus.

“Wherever I am on a Friday night, it’s the Super Bowl to me,” he said. “The game is always important to both teams.”

Tanner said he has seen a number of outstanding players through the years including some that went on to NFL stardom.

“I have called Collegiate games with Russell Wilson at quarterback,” he said. “His presence was as good as any player I have ever been on the field with. He also was a really good kid.”

Tanner said even though he has been officiating for nearly four decades, he still looks forward to donning the black and white striped uniform.

“I still enjoy it,” he said. “I have many friendships I have made. Friday night football is still the best game in town.”

“I started when I was still living in Farmville,” he said, “and continued when we moved back here. I have also called Dixie Youth baseball and some Babe Ruth baseball.”

While Moody did not play high-school sports, he has always had a love for the game. He decided to get into officiating because it looked like a challenge.

“I have always liked basketball and baseball,” he said. “And I don’t mind people yelling at me. I have been called every name in the book,” he added with a laugh.

Moody said the most important attribute for an official is calling it the way you see it.

“I want to be fair,” he said. “You have to call it like you see it. Whatever you call, fifty percent of the people are not going to be happy. I have never called a perfect game and probably never will.”

Moody has officiated a number of Park View-Bluestone basketball games over the years.

“I have worked quite a few,” he said. “You always anticipate a well-played game.”

Moody who will turn 70 this year, said he plans to continue officiating as long as his body will allow and he is enjoying it.

He has six games scheduled this week and eight next week.

He started his career umpiring baseball and did that for 10 years as well as officiating basketball for 17 years.

Clark said football has always been his favorite.

“It is the best sport to officiate,” he said.

Clark called his first King of the County contest between county schools Bluestone and Park View nine years ago and served as the crew chief for the final meeting in the series this year.

“I was a head linesman for 25 years and have been a referee for the last 13 years,” he said.

Clark said he has always enjoyed working with young people and that is why he got into officiating.

“I enjoy young people and Mr. Dan Tanner talked me into it to have something to do,” he said.

Clark said officials have to keep abreast of the rules changes every year which at times can be very different from the rules for college and the NFL.

“You have to work at it all the time and keep up with the new rules and official mechanics because they change every year,” he said.

Clark has been selected to call a playoff football game for 23 years in a row and worked two independent schools state title games this past season.