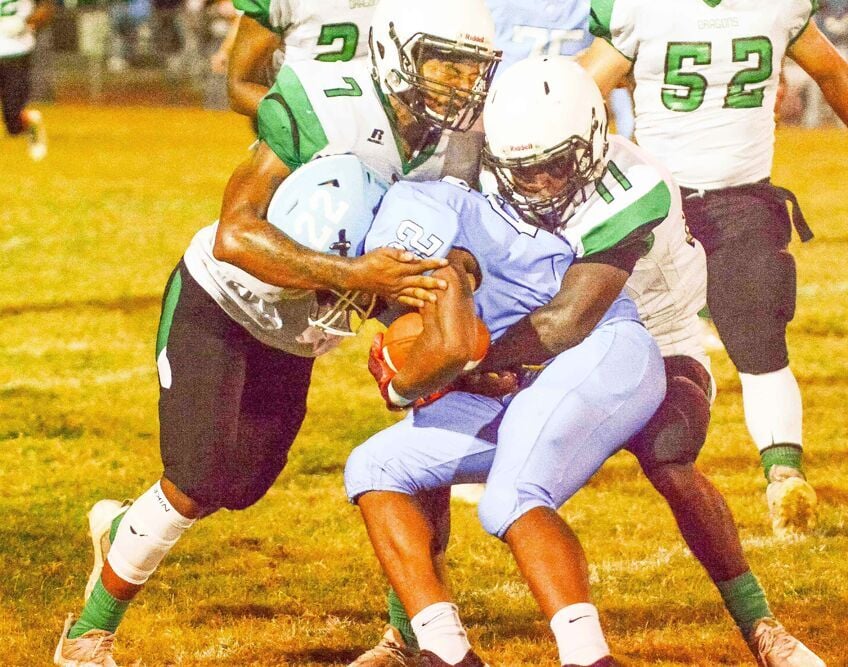 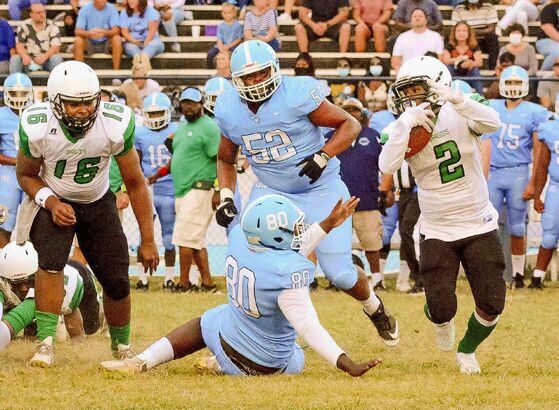 The Park View High School varsity football team played a solid first half of football on Friday night but injuries and turnovers in the fourth quarter allowed Halifax County to pull away for a 55-21 victory on homecoming night in South Boston.

The win improved the Comets, a Class 4 program, to 2-0 on the season while the Dragons fell to 1-2.

“I thought our effort was fine,” Park View skipper Tony Whittingham, Jr., said after the game. “We just had a lot of injuries during the game.”

Whittingham said he was hopeful that none of the injuries were serious.

Park View will hit the road for their Tri-Rivers District opener at Southampton HS on Friday night.

“We will be back ready to play,” he said.

Park View got off to a great start at Halifax after receiving the opening kickoff. A 14-yard run by Ta’marion Thomas advanced the ball to the Dragons’ 48-yard line. Faced with fourth-and-5 from near midfield, the Dragons went for it and Tomar Logan found an open seam and pulled away for a 49-yard touchdown run. The PAT by Jahir Magan-Vargas gave Park View a 7-0 lead at the 7:58 mark of the opening quarter.

The Comets did not take long to answer. Taking over near midfield, Semaj Jeffreys and Joshua Miller put together several big gainers on the ground before Miller scored on a 7-yard touchdown run. The PAT by Ella Morrison knotted the score at 15 at the 6:55 mark of the first quarter.

The Dragons were unable to get anything going on their next offensive series and punted.

The Comets took over near midfield and a 21-yard run by Mikyler Smalls moved Halifax to the Park View 31-yard line. Three plays later Miller scored on a 15-yard touchdown run for a 13-7 lead at the 1:44 mark of the opening quarter.

Park View answered on the ensuing kickoff as T. Thomas fielded the kick and made two nice moves to gain the corner and ran 81 yards for a touchdown return. The PAT by Magan-Vargas gave the Dragons a 14-13 lead at the 1:31 mark.

Halifax answered on their next possession as a 47-yard pass completion gave the Comets a first down inside of the Park View 10-yard line. Three players later Smalls scored on a 1-yard touchdown run and quarterback Dakil Chandler added a 2-point conversion run for a 21-14 lead with 34 seconds left in the first quarter.

After both teams exchanged punts in the second quarter, Halifax came up with the first turnover of the night on a fumble recovery.

The Dragons defense stiffened however and stopped the Comets on fourth-and-8 from the 23-yard line.

Park View put together their best sustained drive of the night moving from their 23-yard line to the Halifax 5-yard line. The Dragons had first and goal with four seconds left but DeAndre Watson was stopped two yards short of the goal line when the halftime horn sounded allowing Halifax to take a 21-14 lead to the break.

The Comets took the second half kickoff and moved inside of the Park View redzone but the Dragons’ defense came up with a big hit on fourth-and-goal to gain the ball back.

Two plays later, a pass from Watson was tipped and intercepted by Halifax’s Jy’Quez Ferrell.

The Comets cashed in the turnover when Chandler hit Kanya Caddle with a 10-yard touchdown pass. The PAT gave Halifax a 28-14 lead at the 8:46 mark of the third quarter.

Park View got on the board again late in the third quarter. A 30-yard pass completion from Logan to Karatavion Thomas gave the Dragons a first and goal and Logan scored on a 4-yard run on the next play as the PAT by Magan-Vargas cut the Halifax deficit to 28-21 at the end of three quarters.

With the injuries mounting, Halifax took over in the final stanza as Smalls scored on a 48-yard touchdown run.

The Comets recovered the ensuing kickoff after Park View did not field the kick and Ferrell scored on a 9-yard touchdown run.

Qualik Tucker intercepted a Park View pass a minute later and returned it for a 60-yard touchdown and Halifax added its final scored when Zack Carter recovered a Dragons fumble and returned it 46 yards for a touchdown.