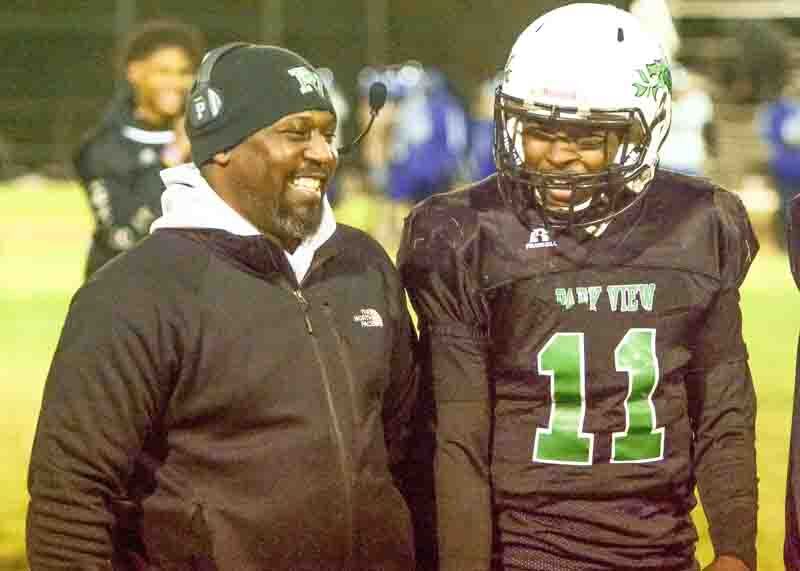 Coaching and mentoring young people are important to Park View assistant football coach Kevin White who is pictured sharing a laugh with tailback Tomar Logan after the Dragons’ 50-0 shellacking of visiting Windsor HS in the school’s final football game in November. (Dennis Smith) 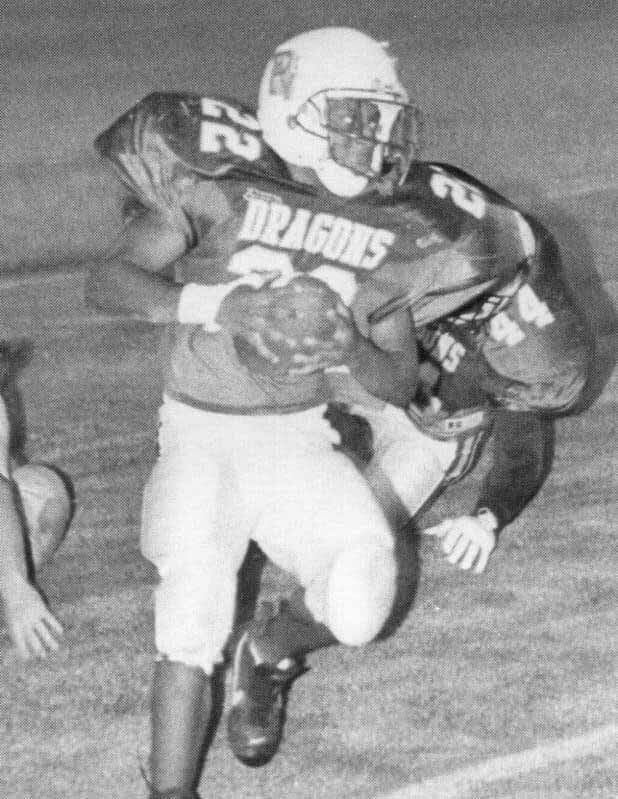 Kevin White was an outstanding corner for Park View HS and had break-away speed at running back. (Dennis Smith)

Coaching and mentoring young people are important to Park View assistant football coach Kevin White who is pictured sharing a laugh with tailback Tomar Logan after the Dragons’ 50-0 shellacking of visiting Windsor HS in the school’s final football game in November. (Dennis Smith)

Kevin White was an outstanding corner for Park View HS and had break-away speed at running back. (Dennis Smith)

(With Park View High School slated to merge with Bluestone HS to form the new Mecklenburg County HS in 2022, the South Hill Enterprise is running an ongoing series that looks back at some of the outstanding athletes and coaches and their stories through the years. This is story No. 69 in the series.)

Kevin White, Class of 1999, was just the kind of student-athlete any coach would be delighted to find at tryouts when starting a new high-school sport.

The Park View HS soccer team organized in White’s senior year and he decided to lace up the cleats despite having never played before.

“I was learning on the fly,” he said with a laugh. “David Trujillo would sometimes give me a sign that he was about to kick one deep and I would outrun everyone to the ball and juke the goalie out.”

White was a defensive standout at cornerback in football for Park View and played all four years in the program.

Despite going 1-19 in his first two seasons, Park View rebounded after Coach Wade Crutchfield returned for his second stint at the helm, to go 6-4 during the 1997 season and 7-3 the following season, just missing out on a regional berth.

White was selected to the All-Southside team at corner both years.

White’s love for football developed at a young age.

“Football was always my favorite sport. My Uncle Charles got me involved,” he said.

White started playing organized football in the South Hill Yellow Jackets program under coaches Bill Ogburn, Jamie Rogers and Kell Fleshood. “I was one of the kids that no one knew anything about because it was my first-time playing sports,” he said. “So, it started there.”

White’s speed made him a big play threat at running back on offense in high-school.

“After Kevin Jones would wear them down, it always made it a little easier,” he said with a laugh.

White said one of the memories that stands out the most to him were games against Matoaca HS which was led by Matt Farrior, a high-school All-American. The Warriors were ranked No. 1 in the state when the Dragons played them in his senior season.

“We competed with them,” White said. “The team in my junior and senior year was a little different. We didn’t buy into the hype and we just went out and played. We had a lot of talent on those teams.”

White said the relationships he formed playing sports became an important foundation in his life.

“Probably eighty-five percent of the guys I still deal with came from playing sports and particularly football,” he said.

Following high-school graduation and while attending college, White got involved in coaching and assisted Sonny Echols with a South Hill Yellow Jackets team in 2001 and then coached with Tom Jones.

“I used football as a way to build relationships with our youth,” he said.

White also found out that he had a calling to help mentor young people and started working with New Directions Community Outreach.

“It allowed me to give our kids positive outlets,” he said.

White was also involved with a local group of young men that held a kid’s community outreach day at the park each summer with free activities, food and games for youngsters.

“When I talk about those relationships formed in football, Fleshood Chiropractic was one of our big sponsors as well as Jason Dawson,” he said. “Coach Fleshood was one of my first football coaches and Jason was a teammate.”

White worked in management for Global Safety Textiles for 15 years before he and his wife Amanda opened “Only Because We Care,” in November, 2018 which provides after-school and before-school programs for local youth.

“It allows us to have face time with our youth,” he said. “We also run summer programs.”

White, who is always positive whether coaching on the sideline or mentoring one on one, said he developed that attitude at a young age.

“My upbringing was super humble,” he said. “Sometimes circumstances were not always the best but I always tried to make the best out of every situation and I wanted to help other kids to have that opportunity. I know our youth are the future and I want to leave the world a better place.”

White has also helped make a difference in young people’s lives by serving as a coach.

He has worked as an assistant football coach with the Park View HS program since 2014. White has served as an offensive coordinator for the Dragons for five years and also helped on defense this past season.

He said he hopes to continue coaching when the new consolidated Mecklenburg County HS opens in the fall.

“I hope to be part of that transition,” White said. “I think our kids are going to have an outstanding opportunity at the new high level in the classroom and on the field.”

Kevin and his wife Amanda have two sons; Jonte Minor and Kawon “Kool Aid” White, a sophomore football player for the Dragons.