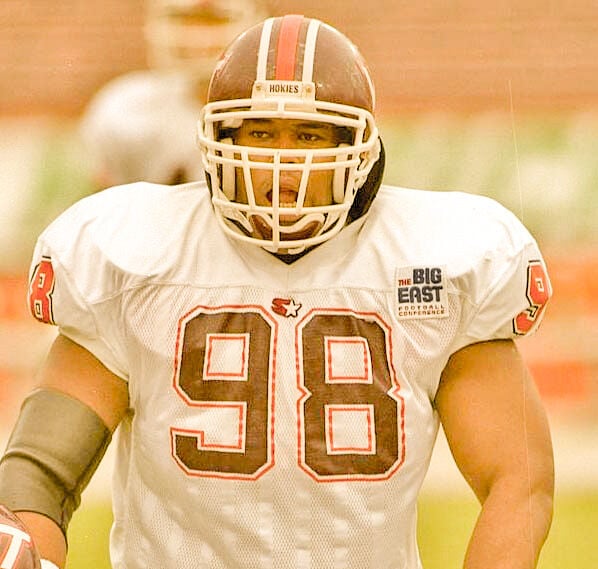 Former Park View standout Waverly Jackson was a standout at defensive end at Virginia Tech and went to four bowl games with the Hokies in his four seasons. (VT photo) 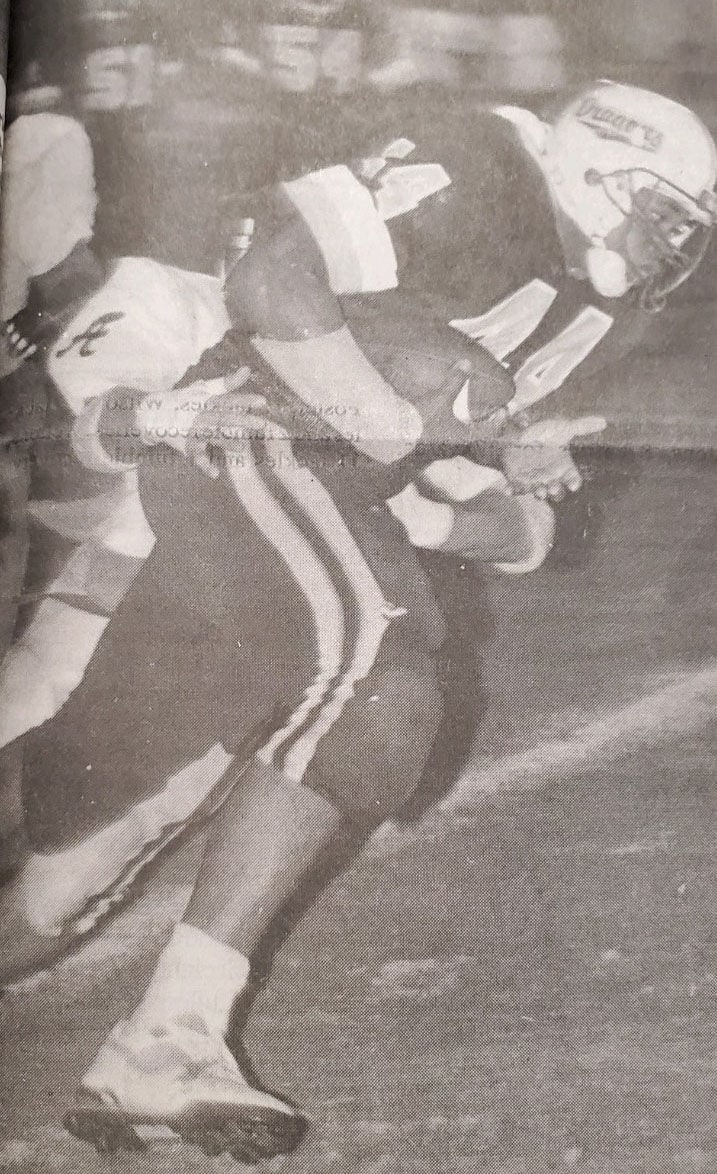 Waverly Jackson ran some at fullback during his high-school career and gained 119 yards on 10 carries against Central of Lunenburg in the season opener in 1991. Jackson was a two-time All-State selection on defense for the Dragons. (Dennis Smith) 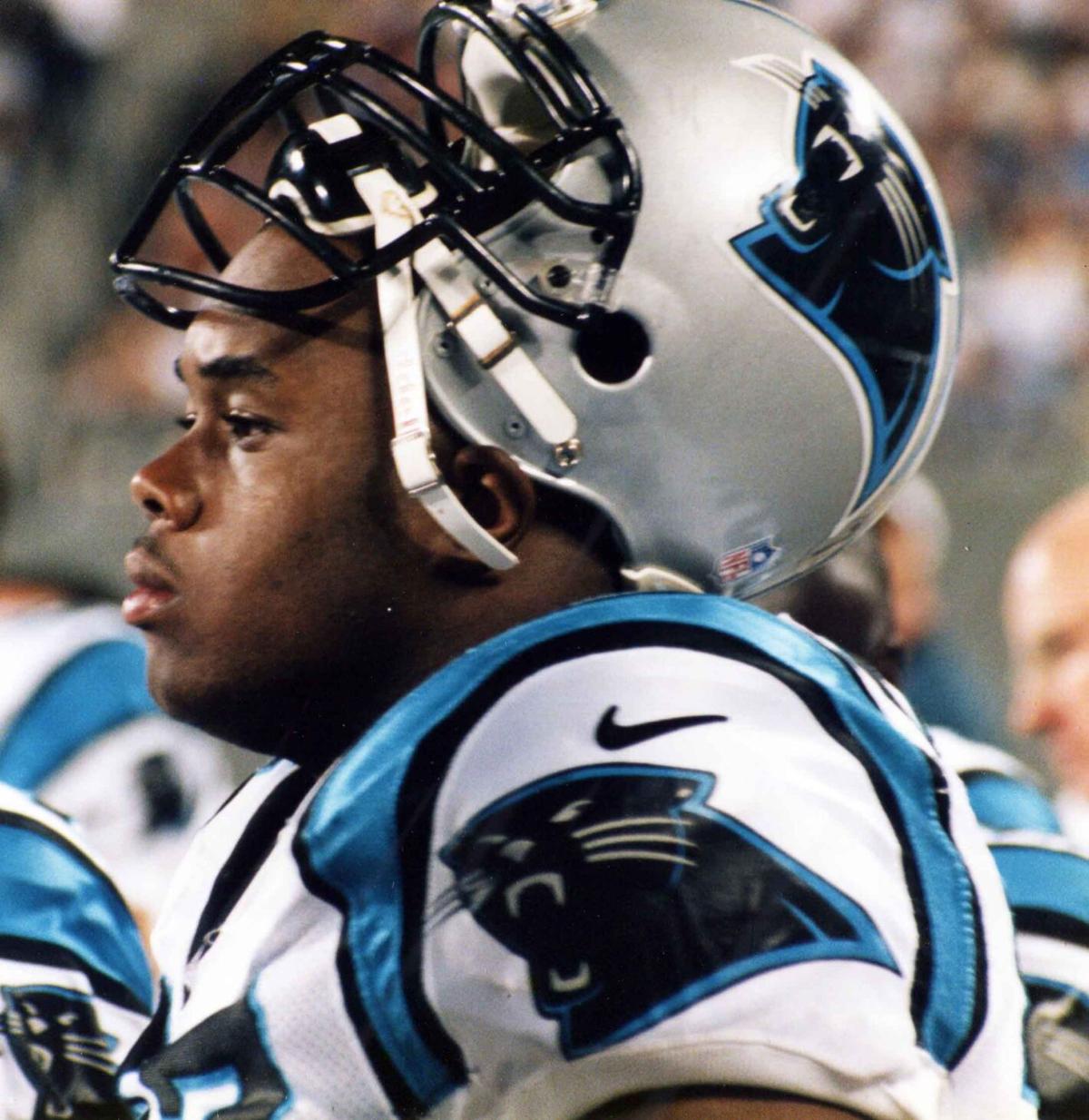 Waverly Jackson began his professional football career with the Carolina Panthers in 1997. He is pictured in a preseason game that year against the Pittsburgh Steelers. (Dennis Smith)

Former Park View standout Waverly Jackson was a standout at defensive end at Virginia Tech and went to four bowl games with the Hokies in his four seasons. (VT photo)

Waverly Jackson ran some at fullback during his high-school career and gained 119 yards on 10 carries against Central of Lunenburg in the season opener in 1991. Jackson was a two-time All-State selection on defense for the Dragons. (Dennis Smith)

Waverly Jackson began his professional football career with the Carolina Panthers in 1997. He is pictured in a preseason game that year against the Pittsburgh Steelers. (Dennis Smith)

(With Park View High School slated to merge with Bluestone HS to form the new Mecklenburg County HS in 2022, the South Hill Enterprise is running an ongoing series that looks back at some of the outstanding athletes and coaches and their stories through the years. This is story No. 54 in the series.)

Former Park View High School football standout Waverly Jackson, who reached the pinnacle in football by playing in the National Football League, said teachers, coaches and family members believing in him as a youngster helped him achieve more than he ever thought possible.

“I am fortunate to have had good people that saw something in me,” he said.

Jackson, Park View Class of 1992, did not start playing football until the eighth grade at Park View Middle School.

He was unable to play South Hill Mites and Midgets football as a youngster due to his weight.

“I wasn’t fortunate enough to play Yellow Jackets football,” he said. “There was a weight limit back in the day.”

Jackson quickly excelled on the defensive side of the football at PVM with his size and speed.

“I really looked up to Coach Lassiter and Coach Powell,” said Jackson. “They made me want to be a coach. They were always approachable.”

He played varsity football all four years for the Dragons and was named the Southside District Defensive player of the year in his junior year as well as being named to the VHSL Group AA All-State team in his junior and senior seasons. He was also an All-District selection for three years.

Jackson said looking back on his high-school career, district games against Nottoway, Bluestone and Brunswick were always special to him.

“We were always looking forward to the big rivalry games,” he said. “I was blessed to play with guys like Chris Feggins and Terry Burnette.”

Jackson said he learned a lot from his coaches during his high-school career.

“Coach (Wade) Crutchfield gave us some wonderful memories,” he said. “He exposed us to things like discipline and showed us that if you want something, you have to work for it.”

Jackson said Ben Taylor and Crutchfield would often open up the weight room for players that wanted to lift on weekends.

Jackson also played basketball all four years at Park View and said he loved the sport.

“Coach (C.W.) Gee pushed me the most,” he said. “I knew how to play football but I had to work at playing basketball.”

Jackson said Coach Gee would often give him a ride to work after practice on Saturday mornings so he could do both.

He received his first recruitment letter from Southern Cal while he was a freshman in high school.

“Coach Crutchfield gave me a letter and said they are interested in you,” he said.

“I credit all the coaches in my career and the ones I played against,” he said. “They also helped by saying, ‘Hey there is big kid down at Park View you should check out.”

Jackson, who was ranked the #27 player in the state by the Roanoke Times in his senior year, had interest from a number of schools including UVA, Wake Forest, Norfolk State, Ferrum and William & Mary.

“I got to Virginia Tech by playing basketball,” Jackson said with a laugh. “It is like I tell the kids all the time, you never know when someone is watching you.”

Coach Jones from Virginia Tech was on his way to Southampton HS one night to scout Percy Ellsworth but was running late. He ended up stopping in South Hill and decided to watch the Park View basketball team play.

“He saw me running up and down the floor and he went and talked to Coach Crutchfield,” said Jackson. “Coach gave him a game tape and they called and said they wanted to sign me.”

Jackson had yet to earn a qualifying score on his SAT but legendary Virginia Tech Coach Frank Beamer told him he now had incentive to do so.

“Coach Beamer gave me an opportunity,” he said. “He told me, ‘Now you have something to work for.”

Jackson was a standout at Virginia Tech. He was a four-year letterman and a 3-year starter at defensive end. He earned the Outstanding Senior athletic award at Virginia Tech in 1996 along with Bryan Jennings.

Jackson said his class is the one that started the incredible 27-year Bowl streak at Virginia Tech.

“Our class started the whole bowl run,” he said.

Jackson said his experience at Virginia Tech was fantastic and not just because of his great football career.

“Meeting so many people from so many different cultures,” he said. “I haven’t met a bad Hokie yet.”

Jackson earned an invite as one of the top 300 collegiate players in the country to the NFL Combine but was not drafted.

“There were just two days of the draft back then,” he said. “I met with my agent and we looked at potential spots to sign.” Clubs such as Seattle and Pittsburgh reached out.

Jackson signed as a free-agent with the Carolina Panthers because they had a number of veterans on the roster.

“I figured I could get down there and outwork them,” he said.

The connections he made at Carolina paid many dividends. Jackson spent his first season on the practice team but an injury allowed the coaching staff to experiment with him as an offensive lineman.

He signed with the Indianapolis Colts the following season and played four years there, appearing in 69 games on the offensive line while making 22 starts.

Following his playing career, Jackson decided to give back to the local community that had been so supportive of him. He paid for the weights and mirrors in the new Park View weight room to help other young athletes. He also made a phone call that helped lead to the next chapter of his life.

“I called Coach Crutchfield and asked him if I could help out,” he said. “It was just something special about working with the kids.”

He spent a year as an assistant coach and took over as the head football coach at Park View HS in 2005 following Crutchfield’s retirement. After dropping their first four games that season, the Dragons rebounded to win four of its final six for a 4-6 mark in his first year.

The Dragons went 9-3 in Jackson’s second season, advancing to the regional semifinals before falling 36-21 to James Monroe. Park View avenged a regular season loss to Prince Edward by topping the Eagles 12-7 in the regional quarterfinals.

Jackson said a few years ago he went to a coaching clinic where former Pittsburg Steelers Coach Bill Cowher was speaking.

“He called me by name,” Jackson said. “He said, ‘We tried to sign you.’ That was pretty special.”

Jackson said there are so many local people that helped him in his career.

“Johnny and Pauline Feggins took me to my first collegiate game to watch Howard (Feggins) play,” said Jackson. “That really inspired me.”

He said Faith Siverd always checked in with him on his academics progress throughout school.

“She first had me as a fourth grader,” he said. “She made sure I stayed on my academics.”

“(Teachers) Mrs. Jones and Mrs. Hicks were strict for a reason,” he said. “They wanted you to succeed.”

Jackson’s older half-brother Ben Coleman, a former Park View standout who also played in the NFL, gave advice to him in preparation for the next level.

Jackson said he learned so much from his coaching staff when he took over as head football coach at Park View.

“I had some great coaches like Johnnie Williams, Mike Greene, David Crowder and Johnny Wright,” he said. “I learned a lot from them.”

He said Coach Greene has been so supportive to him and the athletics program at Park View.

“All the years and work he put in on the field,” said Jackson. “Danny (Watkins) and I still call him now. He has meant so much to Park View.”

Jackson said his success has been because of others who saw something in him when he was just a youngster.

“I was blessed to have good people around me,” he said.

Jackson, who works for J. R. Tharpe Trucking, currently serves as an assistant coach for the Park View girls’ basketball team and a consultant for the Nottoway HS football team. He is married to Donna Jackson and they have two daughters, Jon’tavia and Jordyn, an athletic standout in softball and volleyball at Park View.