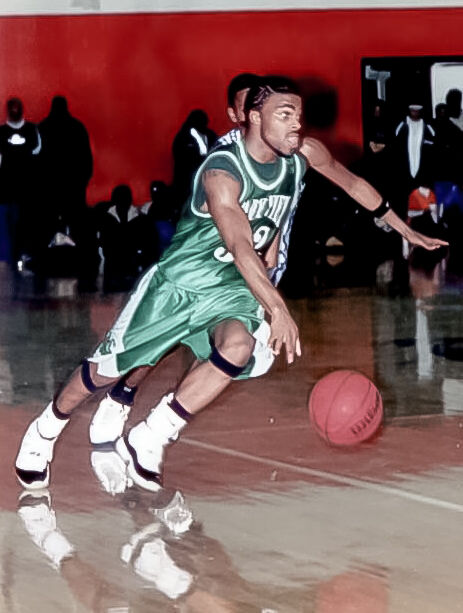 Park View’s Tromaine Moore pushes the ball up court in the Daily Herald Holiday Classic during the 2000 season. (Dennis Smith) 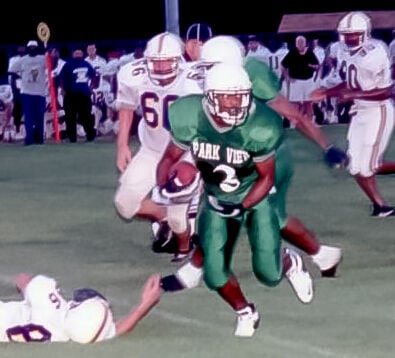 Park View’s Tromaine Moore pushes the ball up court in the Daily Herald Holiday Classic during the 2000 season. (Dennis Smith)

(With Park View High School slated to merge with Bluestone HS to form the new Mecklenburg County HS in 2022, the South Hill Enterprise is running an ongoing series that looks back at some of the outstanding athletes and coaches and their stories through the years. This is story No. 51 in the series.)

When you look at some of the talented brothers that took the field together at Park View High School, Jermaine and Tromaine Moore are names that certainly come to mind.

Both were outstanding athletes and standouts in several sports.

He played varsity football three years for the Dragons before transferring to Brunswick HS for his senior year.

Moore played defensive end in his freshman season for Park View and moved to the wheel back during his sophomore campaign. He and his brother Jermaine were linebackers in his junior campaign.

Moore was named as an All-District punter all four years he played varsity football as well as being named First Team as a defensive end in his sophomore season.

“That started back in the Yellow Jackets. Coach List taught me how to punt,” Moore said. “When I got older, I starting putting more effort and technique into it.”

Moore’s longest career punt was a 72-yarder in a regional game at Southampton HS.

He said his favorite football memory was actually watching his brother Jermaine in a game against Nottoway HS in 1998 when the Cougars went on to capture a state title.

“There whole line was like 250 pounds and they told Jermaine he wouldn’t even make a tackle,” Moore remembered with a laugh. “They beat us but I think he ended up with 20 tackles and a sack in that game.”

Like his brother, Tromaine was also known as a fierce hitter on the gridiron.

Moore said when he was in the ninth grade, the two brothers were lined up against Kevin Jones and Kelvin Hutcheson at practice.

“Jermaine hit KJ so hard it popped his shoulder pad,” said Moore. “I learned a lot from them though. One thing I learned is that when you decide to go, you go (with everything you have.) ”

“I enjoyed being able to do things that others couldn’t do,” he said. “I could play every position even thought I never caught in a game.”

Moore was fast enough to play every outfield position but spent most of his time at third base or on the mound.

“I enjoyed working at it and getting better,” he said.

One of his favorite memories on the diamond actually came in a contest against Brunswick when he was facing Bulldogs’ ace pitcher Buck Walker.

After striking out, Buck’s father, Charlie Walker, who had coached Tromaine growing up, told him to go get a smaller bat and put it over the fence like he had showed him.

“I didn’t put it over the fence but I did hit it to the fence,” Moore said.

He played JV basketball at the small forward position in his freshman season but moved to point guard on varsity.

He said his favorite memory in hoops happened in the Daily Herald Holiday Classic in Gaston, NC.

“We were playing Northwest in our first game and Jermaine and I had been working on a play where he drives the basketball to the hoop to draw the defense and then throws me an alley-oop,” said Moore. “On the first play after the tip, he drove to the hoop and he put the alley-oop right at the rim and I caught it and dunked it. It was the only dunk I had in high-school.”

Moore said he and Jermaine would always push each other to get better.

“It was an unspoken competition,” he said. “My Mom always said y’all can compete with each other but never against each other.”

“I really wanted to go to Virginia State but I didn’t get the invite they sent,” he said. “So I decided to join the military.”

Moore spent eight years in the U.S. Army and went on several tours in Iraq. He currently works at Georgia Pacific in Emporia where he lives.

Moore has three children with the oldest being 19 and the youngest being a 1-year old.

Tromaine is the son of Ms. Bernisa Moore and the late Frank Moore of La Crosse.