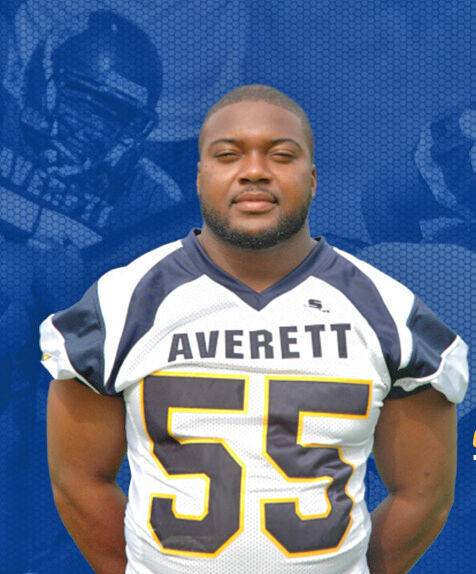 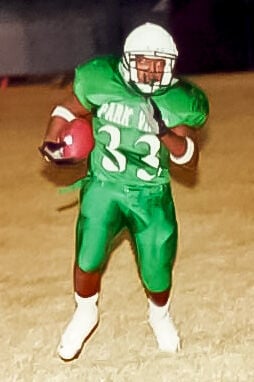 Jermaine Moore was a bruiser at fullback and a big hitter from the linebacker position for the Park View HS football team. (Dennis Smith)

Jermaine Moore was a bruiser at fullback and a big hitter from the linebacker position for the Park View HS football team. (Dennis Smith)

(With Park View High School slated to merge with Bluestone HS to form the new Mecklenburg County HS in 2022, the South Hill Enterprise is running an ongoing series that looks back at some of the outstanding athletes and coaches and their stories through the years. This is story No. 50 in the series.)

One of the wonderful benefits of playing sports is the lifelong friendships that follow.

Moore and Hutcheson became friends when they started playing youth football and that continued through Park View Middle and Park View High School.

Hutcheson and Moore were both defensive standouts for the Dragons and graduated together in 2000.

Hutcheson headed to Averett for what would be a sensational football career that led to his induction into the Averett Athletics Hall of Fame in 2014.

An invite from Hutcheson to Moore to come and join the program led to another outstanding career for a Dragons’ standout and Moore’s induction into the Averett Athletics Hall of Fame in 2016.

“When I graduated high-school I had no offers,” said Moore. “I did go to a summer camp at Montgomery College but I didn’t stay and came back home and went to SVCC for two semesters. Hutch recruited me to come and play at Averett.”

The two friends that had played football together at every level since they were youngsters were once again reunited as teammates on the collegiate level.

Moore was named the Dixie Conference Rookie of the Year in his freshman season when he totaled 31 solo tackles, 32 assists and three sacks in nine games. He was also named first-team All-Conference at linebacker and was the Averett football team Co-Rookie of the Year.

He went on to record 313 career tackles and six forced fumbles to rank second all-time in program history and he owns the program's career record for tackles for a loss (51).

Moore is the only Cougar to win both the USA South Defensive Rookie of the Year (2002) and Defensive Player of the Year (2006) during his career. He also earned All-Conference First Team honors three times and earned multiple all-state honors during his playing career.

In 2013, Moore was selected to the USA South Conference's 50th Anniversary football team and was inducted into the Averett Athletics Hall of Fame on Oct. 15, 2016.

“I had a good career there,” Moore said recently.

He is actually second to Hutcheson on the career tackles list as former Park View players own the top two spots.

“Hutch and I have been best friends since Mites football,” Moore said. “Even to this day, he’s my daughter’s godfather.”

Moore said he fell in love with football as a youth football player who used to go watch the Dragons play on Friday night.

“We used to go to the games on Friday night since our games were on Saturdays,” he said. “We got to see the players up close. That is what I wanted to do. Going to a high-school game on Friday night was what everyone did. It was something to look forward to.”

He was an All-District selection numerous times and played a number of positions including linebacker, fullback, defensive end, guard and tackle.

“I mostly played linebacker and fullback,” he said.

A special memory for him was a game against Massaponox in his senior season when he hit quarterback Joe Perry with such force that it knocked him out of the game.

“I hit him and knocked him out,” Moore said.

The two ended up as teammates at Averett. While sharing war stories, Perry talked about the time he was knocked out of a game against a team wearing green and white.

“That was me,” Moore told him with a laugh.

Moore said he decided to focus on football in high-school because he stopped growing taller.

“I was good at all sports growing up but I wasn’t getting any taller,” he said. “I started putting my efforts into football and it paid off for me.”

With Kelvin Hutcheson, Kevin Jones, Jermaine Moore and his younger brother Tromaine Moore all on the same team, there were some huge hits taking place at practice every day and in every game.

“I remember me and Hutch hit each other so hard one day at practice that they stopped up from hitting each other anymore,” Moore said.

He said playing with his brother Tromaine was also special

Moore said growing up they were usually pretty competitive as both were standouts in many sports.

“We were always competitive and there may have been a few fights,” he said with a laugh. “I could always say, let’s go workout and we would do it together. Going against each other gave us both confidence.”

He said helping Park View earn a regional bid for the first time in a number of years in his junior year was also a special memory for him.

Following his college graduation, Moore decided to call it a career as he was still dealing with several injuries he had endured during his collegiate career and he just didn’t think a 5-8 linebacker could make it in the professional ranks even though the desire was there.

He started a company working with FedEx and ran that for the next 15 years.

Moore has worked as a Recreation Supervisor with the Virginia Department of Corrections for the past four years.

He also served as an assistant football coach for two years with Park View and two years with Greensville HS and currently serves as a bass player for a local church band.

Moore lives in Emporia and has two children, a 7-year-old son and a 9-year-old daughter.

Jermaine is the son of Ms. Bernisa Moore and the late Frank Moore of La Crosse.